2020 in Review: 7 Stats That Tell the Story of Philadelphia

It was a year unlike any other. Here are the numbers that prove it. 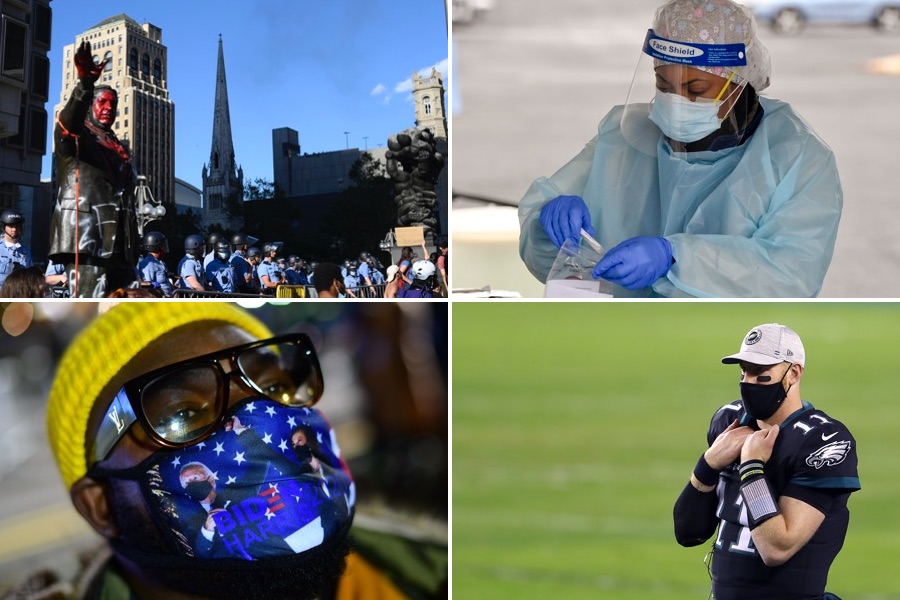 A lot went on in Philadelphia in 2020. Photos clockwise from left: Bastian Slabbers/NurPhoto, Ben Hasty, Mitchell Leff, Mark Makela. All via Getty Images.

How to summarize 2020? This year has seemed to contort time in entirely new ways. Some days, it can feel shocking that it’s already December, with 10 months of pandemic time gone by. Other times, it’s impossible to remember anything but the pandemic, even though there were two months of pre-pandemic 2020 — or so I’m told.

This makes looking back on the year somewhat difficult. Yes, the pending rollout of the vaccine means there’s light at the end of the tunnel, but remember: We’ve been in this tunnel for a long freaking time. Turn around to look back, and there’s not much light to be seen at all. That’s not stopping us from trying, though. Here are seven stats that tell the story of Philly in this strangest of years.

That’s the number of votes for President-elect Joe Biden in Pennsylvania. Oh, sure, we could have picked some other figures. Maybe 80,555: Biden’s margin of victory statewide (or perhaps 80,556, since there was one instance of recently confirmed voter fraud — a Delco dude who sent in a ballot for Trump on behalf of his deceased mother). Or 471,305: Biden’s margin of victory in Philly. How about 34,348, the increase in turnout in Philly compared to 2016? Or zero: the number of state legislative chambers flipped by Democrats. Also zero: number of successful Trump lawsuits attempting to overturn the election results.

That was the number of people hospitalized in Philadelphia with COVID-19 on April 22nd — eight months ago to the day, and right around the peak of cases during the spring. Today, the total is 815. The United States isn’t the only country experiencing an uptick in cases right now; much of Europe is dealing with the same thing. But there are places like South Korea, Australia and Japan, all of which are significantly better off at the moment than we are. Remember how terrified everyone was back in late April into early May about the prospect of overflowing hospitals and short-staffed health-care workers? Well, after a decline in cases over the summer, here we are again, talking about the same thing. It wasn’t inevitable.

That’s the number of people currently unemployed in Philadelphia. Unemployment peaked in July at 135,000 people, or 18 percent of the city’s labor force.

The unemployment situation has improved since then, dropping to 10.6 percent as of October. But that’s still a huge number, especially in a city that already had the highest big-city poverty rate — 24 percent — in the U.S. before the pandemic. According to researchers, coronavirus has already increased the number of Americans in poverty by eight million. Congress may have just passed a new stimulus package, but with that bill’s $300 in weekly unemployment benefits set to expire in April, unemployment and poverty are going to remain critical issues in Philly well beyond the coming spring.

The summer’s Black Lives Matter protests spurred by the killing of George Floyd were by some estimates the largest social movement in U.S. history. In Philly, police responded by tear-gassing citizens. Twice.

The protests were without question a success — they mobilized millions of people across the country and brought new conversations on defunding the police into the public discourse. Here in Philly, the Rizzo statue fell. The Mayor committed to a list of reforms, including supporting a stronger police oversight board.

But for all of the progress brought on by the protests, it’s abundantly clear that 2020 wasn’t the year that reformed police. Mayor Kenney’s 2021 budget didn’t strip any money from the police budget, though that was a central demand of many local activists. And in October, two Philly police officers shot and killed Walter Wallace Jr., a 27-year-old who had struggled with mental illness. Then, in the aftermath of the protests, police were caught on camera dragging 28-year-old Rickia Young out of her car and separating her from her young child. After all that transpired this year, it was more of the same.

That’s the number of homicides recorded so far this year in Philly, up 39 percent compared to last year. The city is on pace to record the most murders since 1990, when there were 500 killings.

Homicides are up not just in Philly, but nationwide. Criminologists don’t have any single explanation for exactly why that is, although the pandemic, economic decline, and massive protests against police (which have sometimes led law enforcement to stop doing their job in counter-protest) are all possible answers. At minimum, it’s clear that 2020 is an outlier year and might not be indicative of the future.

On the other hand, there is one trend that has been rising before this year and continues to do so: There have been more than 2,100 shootings in 2020, up 85 percent compared to 2015. And while the Philly police only solve 47 percent of murders, they have an even worse record when it comes to shootings. According to an Inquirer analysis of all shootings, fatal and non-fatal, since 2015, only nine percent end with convictions.

That’s the number of interceptions and fumbles for which Eagles quarterback Carson Wentz has been responsible. Miraculously, the Birds still have a shot at the playoffs, thanks to the impressive performances of Wentz’s backup, Jalen Hurts, in the last three games — not to mention the historically bad NFC East. The playoffs sound nice, although to be honest, we’ve been checked out of this season for a few weeks now. Greener sporting pastures await us: basketball season!