The Killing of Walter Wallace Jr. Is the Assassination of Philadelphia As We Knew It

When a disabled Black man is shot in cold blood by the police, there's no way we can continue to call ourselves the City of Brotherly Love. 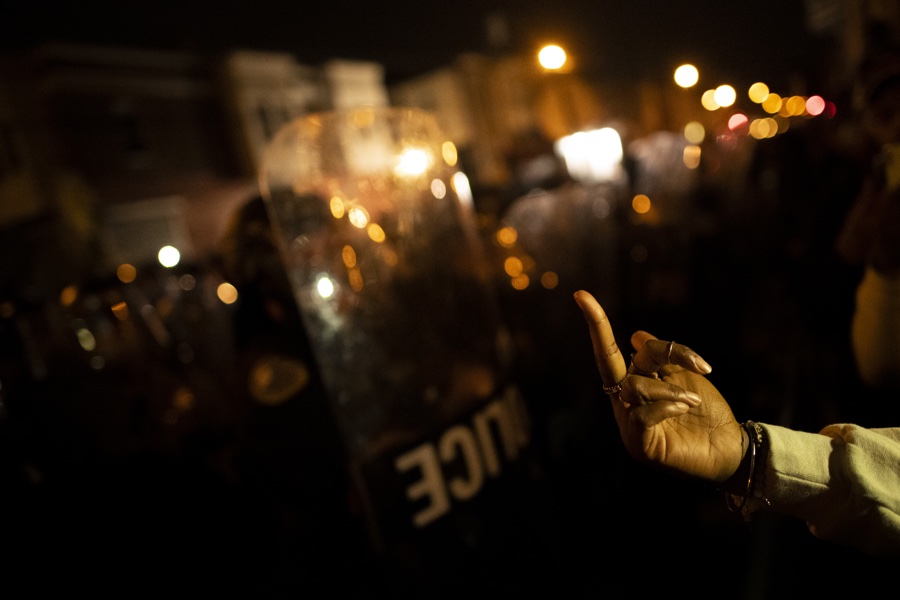 PHILADELPHIA, PA – OCTOBER 27: (EDITOR’S NOTE: Image contains profanity.) A demonstrator points a middle finger at a police line during a protest near the location where Walter Wallace Jr. was killed by two police officers on October 27, 2020, in Philadelphia, Pennsylvania. Protests erupted after the fatal shooting of 27-year-old Wallace Jr., who Philadelphia police officers claimed was armed with a knife. (Photo by Mark Makela/Getty Images)

It finally happened: The world is now watching Philadelphia after a video of a Black man being killed by law enforcement went viral.

On Monday afternoon, police shot and killed Walter Wallace Jr. after receiving a report that he was armed with a knife. In the viral video of the incident, the 27-year-old is seen lying dead as his mother weeps over him. Since the news broke, Wallace’s family has described him as a husband, a father, and an aspiring musician who struggled with mental health issues.

The police literally brought a gun to a knife fight and killed a young Black man who clearly needed help, not execution. As another string of riots and protests takes off, the City of Brotherly Love is no more. We can no longer pretend Philly is a symbol of scrappy optimism. I’ve lived here for a decade, and this has been the year that’s made me most ashamed to call this city home.

It’s become clear that in this city with a majority Black and brown population, those who’ve been sworn to “protect and serve” us fail to do so. It’s hard to ignore how law enforcement has continued to antagonize communities of color — communities that have only grown more distrustful of their actions. We currently have a police department whose union continues to justify racism, party with bigots, oppose transparency, and endorse a white supremacist president.

“Our police are being vilified this evening for doing their job,” Philly Fraternal Order of Police president John McNesby said in a statement on Wallace’s shooting. “We support and defend these officers, as they too are traumatized by being involved in a fatal shooting.” McNesby, who has faced criticism in the past for calling Black protesters “rabid animals,” pointedly did not express sympathy for the man actually killed. Once again, the police make it clear that Black lives don’t matter to them when it comes to backing the blue.

As helicopters continue to hover over my house in West Philly, I am reminded yet again of a summer of grief. Earlier this year, Mayor Jim Kenney and Philadelphia police commissioner Danielle Outlaw defended the city’s excessive use of force on I-676 after George Floyd protests took over the city. It took a bombshell exposé by the New York Times to reveal how our city betrayed its civilians by violating its own police guidelines.

While our “progressive” politicians continued to seek the endorsement of the FOP, Black and brown bodies continued to be oppressed by cops. While many important public sectors, such as the arts, parks and museums, face funding threats, the police continue to be rewarded for bad behavior through raises, bonuses, and contract negotiations. Some argue that the call to “defund the police” is illogical and impossible — but what other department could expect increased funding as it terrorizes the very people it exists to serve?

There is no way to support police accountability without working to actively punish the institution in question. To call for “police reform” is to advocate a passive slap on the wrist for an institution that has killed so many who didn’t deserve to die. Walter Wallace Jr. didn’t deserve to die. The police were clearly in control of the situation as the community intervened in real time. He wasn’t killed because he was a legitimate threat. He was taken away from his family because our current criminal justice system grants police excessive license to kill.

This isn’t the Philadelphia I have considered home. With another visit from the national guard and increased police presence, it feels like we’re living under martial law.

Right now, the answer isn’t “thoughts and prayers”; it’s police resignations and revolution. The solution isn’t police reform; it’s defunding and dismantling. The demand isn’t to improve community/police relations within neighborhoods; the demand is to empower said neighborhoods to envision a world that doesn’t need such antagonistic institutions in the first place. Philadelphia is better than this, but as long as the city continues to ignore the inevitable, we will continue to die a slow death. The police are the problem, and prioritizing our citizens to live without fear of law enforcement is the solution.