This Is What Happens When Law Enforcement Treats Policing Like War

A woman driving near a protest gets ripped from her car by police, as if she's an enemy combatant. Curfews ban any kind of public assembly. Why? Because police view the public as a fundamental threat. 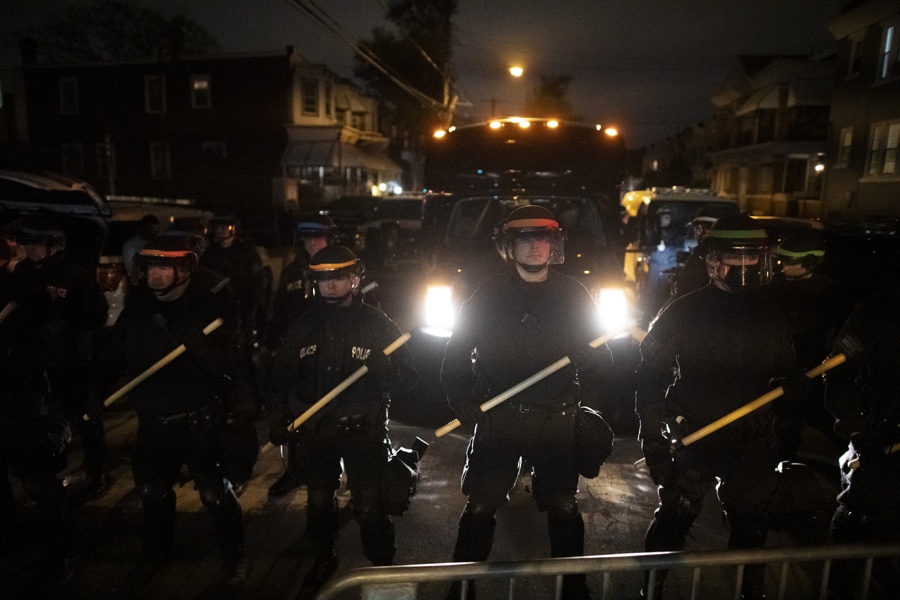 The police have a propensity for fighting wars. In 1965, Lyndon B. Johnson declared a “War on Crime.” Six years later, Nixon followed up with a “War on Drugs.” That second war, which has been carrying on unabated ever since its declaration, has provided the primary justification for militarizing the police, who now can (and do) deploy tactical weaponry like tear gas (technically banned in “real” war under the Geneva Conventions), helicopters, armored cars and sonic weapons against civilians. While the “militarized” charge is typically thrown around as a pejorative by police reformers, what else do you expect? It was the American law enforcement establishment that was sent in to fight these wars on crime and drugs. To fight a war, you need a military.

On Tuesday of last week, the Philadelphia police department mobilized for another fight in one of its long-running wars. But if most of law enforcement’s wars have been publicly declared against inanimate nouns like “drugs,” this war is different. It’s being fought against a group of people, specifically the people — tens of millions in all, just counting those who demonstrated in George Floyd’s name last summer — who have dared to question the police’s role as a force of injustice in American life. The police are at war with the American public.

It’s a war with a lot of collateral damage. Consider the case of Rickia Young, a 28-year-old Black woman who was driving through West Philly early Tuesday morning with her two-year-old son and 16-year-old nephew, whom she’d just picked up from a friend’s house. At the 5200 block of Chestnut Street, Young encountered a wall of cops blocking the road, near the site of protests following the police killing of Walter Wallace Jr. What happened next was caught on bystander footage: A horde of police suddenly swarmed Young’s car, bashing in the windows, pulling her out of the vehicle, tossing her to the ground, and beating her.

Young was arrested and separated from her son. According to the lawyers she subsequently retained, an officer at the scene told her he was going to report her to the city’s foster system and that her son was “gonna go to a better place.” While Young was transported to police headquarters, the Inquirer reported, her child was left sitting with officers in a police cruiser, with shards of glass in his car seat and a welt on his head. He remained there until Young could wangle a cell phone from someone in the back of a police van and alert a family member to pick him up. Young’s head was bleeding, and she was taken to a hospital where she received treatment – while handcuffed. (Young also had a bloody nose and blood in her urine, according to her lawyers.)

Rickia Young wasn’t a protester. What she was, though, was Black, in a West Philly neighborhood that was experiencing a protest against police. That alone was enough to make her, if not an enemy combatant, then at least a sympathizer, in the eyes of police. The video footage doesn’t show what prompted the attack, but the fact that Young was ultimately released from custody without facing any charges suggests that the display of force was wildly inappropriate. Indeed, it’s difficult to imagine what she could possibly have done to deserve that treatment, and to date, the police department hasn’t explained why she was arrested in the first place. But then, in a war, one must act first and reconcile later. (One of the officers involved in the attack has been put on desk duty pending investigation.)

The warlike behavior of police that night didn’t end with Rickia Young’s beating. Sometime after the attack, a photo was taken of a young white female Philly police officer holding a Black child. The national Fraternal Order of Police, the union that represents police officers across the country, posted the image online with the following caption: “This child was lost during the violent riots in Philadelphia. … We are not your enemy. We are the Thin Blue Line. And WE ARE the only thing standing between Order and Anarchy.”

It was rank propaganda, not least because it was completely untrue. The police were passing themselves off as saviors, but the Inquirer soon reported that it was Young’s baby in the photo — the same child who’d been violently separated from his mother by the very police department posing for the photo op.

The picture called to mind a very particular genre of photograph, one that’s been produced time and again by the U.S. military. In these pictures, the armed forces pose as the liberator in a dangerous, violent territory. In one example, a U.S. soldier in Iraq holds a baby wearing a pink sweater streaked with dried blood; in another, a U.S. soldier holds an Afghan child who’d been injured by an airstrike. Similar images abound from Vietnam, with American troops carrying children of the country that their army happens to have invaded. It’s a common trope, and for obvious reasons: A military invasion isn’t a nice thing; to avoid coming off as the aggressor, the Army casts itself (both to the people at home and to those in the country it’s invading) as the hero.

Which is precisely what the police wanted you to see in the FOP image — that they were saving a child (so the image implies) from a deficient parent and a dangerous city.

They said it themselves: “We are the only thing standing between Order and Anarchy.”

The police aren’t stupid. They understand that the Black Lives Matter movement and the calls for defunding police constitute a fundamental threat to the way they currently operate. They recognize that politicians, who have historically been fine with ceding power to police unions, are starting to reconsider whether it makes sense to have a police force structured in such a way that it’s shielded from the usual democratic levers of reform. (Famously, in Pennsylvania, a piece of legislation known as Act 111 sets up stacked arbitration rules making it exceptionally difficult to fire a police officer for misconduct.)

From the police perspective, there are really only two ways to respond to these calls for change. The first is to embrace reform. But to do that would be to admit that something in policing is broken, which is simply a bridge too far for the FOP, whose entire raison d’être is to protect the jobs the defunding movement jeopardizes. Unlike the police department, which has promised some reforms in the wake of the protests, the FOP isn’t part of the government and doesn’t even have to pay lip service to reform. In fact, the FOP just sued the city over its attempt to create public hearings over police contract negotiations.

If your strategy is to block any and all reform, then the logical response, as we’ve seen time and time again from Philly FOP boss John McNesby, is to attack anyone who does the criticizing. De-legitimizing protesters serves another useful purpose for police. By portraying demonstrators as the criminal element — “rabid animals,” in McNesby’s own words — the police can yet again present themselves as the bulwark against lawlessness. (Of course, the irony is that the protests are born of the police tendency to commit extrajudicial killings.) And so a war on the protesters is born.

This attitude is pervasive enough that it calls into question other recent law enforcement actions. This week, Anthony Smith, a prominent West Philly activist who has organized numerous protests against police this year, was arrested on federal charges of burning a cop car back in May. The charges were announced by U.S. Attorney Bill McSwain, who has been notoriously hostile to DA Larry Krasner’s criminal justice reform agenda. McSwain said the charges, which carry a mandatory minimum of seven years in prison, have nothing to do with Smith’s status as an activist. Smith’s attorneys have called the charges “blatantly political.”

Just two nights after the Rickia Young attack, Mayor Jim Kenney instituted a curfew throughout the city. On Friday night, there was another. The city has said that the point of the curfew isn’t to deter peaceful protesting, but rather to prevent opportunistic looters and other “unrest.” Justifications aside, the effect of a curfew is to criminalize public space, which just happens to be the forum of the protesters. And guess who ends up enforcing the curfew order? The police.

This played out in predictable fashion earlier this summer. Peaceful protesters were arrested for being out after dark. But they weren’t the only ones violating curfew. On multiple curfew nights, groups of mostly white vigilantes popped up to “defend” neighborhoods from (ultimately nonexistent) looters. In one case, they were stationed outside the local small business known as Target.

The police didn’t arrest the Target defenders for a simple reason: Those men were play-acting as police themselves, providing backup as a kind of citizen militia. In practice, then, the real crime became protesting at night.

This is what happens after decades of treating police like the military: They decide who the enemy is. And while the police haven’t, for obvious reasons, publicly branded their new war on protesters as such, their behavior during the past months of protest has made clear that there is one pressing enemy: anyone who has the audacity to question them.