The president touted a tax reform plan that analysts say would ultimately cost the middle class. 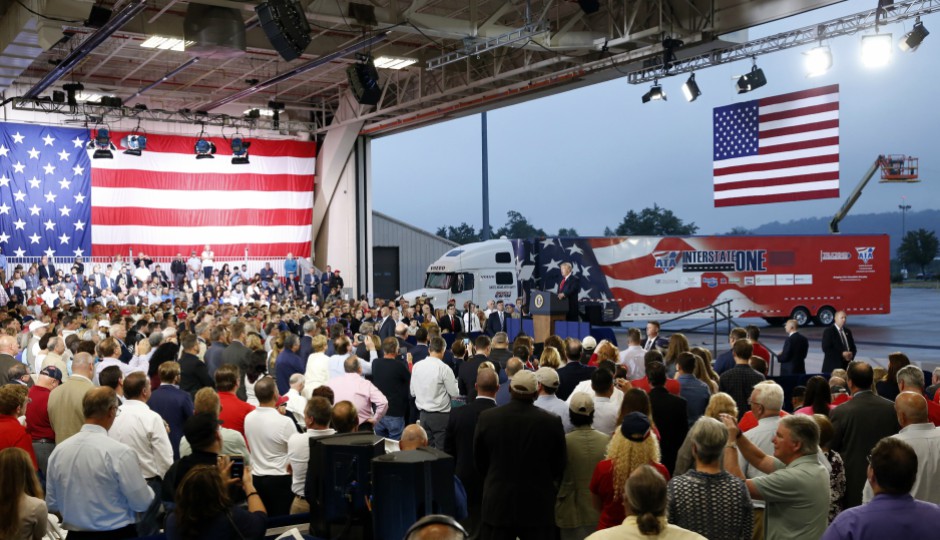 When we found out President Donald Trump was returning to Pennsylvania on Wednesday, we wondered what he’d talk about – other than the tax reform plan (the main reason for his visit).

Now we have the answer: truckers.

Trump addressed an invitation-only crowd of nearly 1,000 truckers on Wednesday evening outside Harrisburg. He spoke in front of a tractor-trailer decked out in a wrap that read “WIN AGAIN” and “Truckers for Tax Reform.”

“It’s great to be back in Pennsylvania with the proud men and women of the American Trucking Associations,” Trump said at the start of his speech. “We love Pennsylvania, and we love our great truckers.”

The president told the crowd that his tax reform plan, which is currently a work in progress, would bring “lower taxes, bigger paychecks and more jobs for American truckers and American workers.”

Late last month, Republicans released a framework for Trump’s tax plan. The independent Tax Policy Center’s analysis of the plan found that it would cost the federal budget $2.4 trillion over 10 years, benefit the richest 1 percent of Americans more than any other income group, and, over time, increase the tax burden on about 28 percent of middle-class workers.

He's so in touch with his audience.

Trump dismissed those findings during his speech on Wednesday.

It's a scam. My interview with the great @DavidCayJ:https://t.co/ChNKEHQ2rC

Trump gave a shout-out to the Pennsylvania Congressmen who attended the speech, including U.S. Rep. Lou Barletta, who the president mistakenly said was running for governor. (Barletta is challenging Sen. Bob Casey.)