Plus, one less reason to grumble about your Comcast bill. 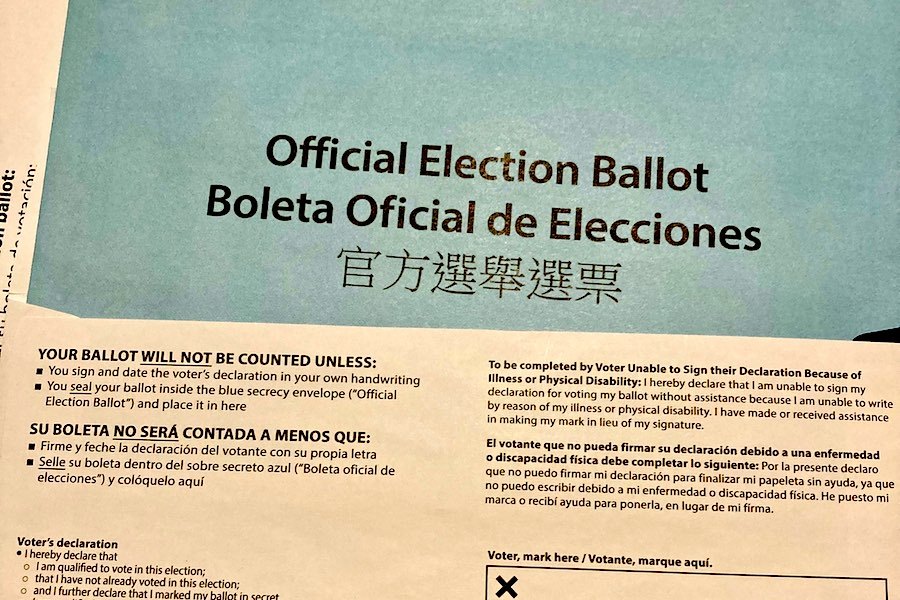 As I told you last week, the so-called “early voting” process in Philadelphia has begun. Registered voters are now a able to request and receive paper mail-in ballots. Then they drop those carefully completed ballots into the mail or at mail-in ballot drop box. You can even do all this in person in one fell swoop at City Hall. It took me 30 minutes to apply for, receive, fill out, and submit my mail-in ballot at City Hall.

Officials were planning for an onslaught of mail-in ballot requests. They are hugely convenient. You skip the lines at the polls on Election Day. (November 8th, people!) And there’s always that chance that you wake up on Election Day to temperatures in the low 30s and pouring rain. Who wants to go vote in that?

And yet, there has been no onslaught. Far from it. In fact, says Philadelphia City Commissioner Seth Bluestein (one of the three elected officials in charge of elections in Philadelphia), the number of requests for mail-in ballots has been “far below expectations.”

As of Monday morning, the city had approved 135,803 applications and mailed out 128,918 of those ballots. Bluestein says that those numbers are “tens of thousands below our original projections.”

No one can be quite sure why there aren’t more people using the mail-in ballot process. In my thoroughly unscientific opinion, it seems to me that mail-in ballots were the talk of the town over the last few years thanks to a well-played marketing campaign about them. But I just haven’t heard quite as much about mail-in ballots this year.

Bluestein says it’s also possible that voters who’ve used mail-in ballots in the past are switching over to in-person voting. One official I spoke with who asked to remain nameless suggested that some voters could be waiting until after the October 25th John Fetterman-Dr. Oz debate to make up their minds and are reluctant to apply for a ballot before then.

Or, you know, we could all just be completely distracted by the glory of being a Philly sports fan right now.

In any event, you have plenty of time to request a mail-in ballot. (Application deadline is November 1st!) Or you can just show up on November 8th and get your precious little “I VOTED” sticker.

City officials continue to struggle with what to do with the large groups of people who take over the streets en massse on ATVs and dirt bikes. Hundreds reportedly flooded the streets near the waterfront on Sunday and police managed to confiscate just three such vehicles.

One Less Reason to Grumble About Your Comcast Bill

I’m not a Comcast customer. And when people tell me how much they pay for Comcast service, it absolutely boggles my mind. But hey, there’s a reason why Comcast revenues for the last fiscal year were up nearly 12 percent, to more than $116 billion dollars.

The good news, according to a Comcast spokesperson, is that the company is giving a big boost to customer speeds. These speeds are said to be up to 2 gigabits-per-second for downloads and upload speeds that are five to ten times faster than what you probably have now. (These boosts are only available in select markets, Philadelphia included.) Comcast says it’s also doubling upload speeds all across the country for all customers on the Internet Essentials Plus plan, one of its most affordable packages that is available to some customers for free based on economic status.

That’s cool. But I’m not getting rid of my HD antenna anytime soon.

An Economic Apocalypse in Chester?

Thanks to pension problems and the failure of a casino to lead to a big revival that was hoped for, one Delco town is on the verge of bankruptcy.

I both hate and love lists like this. According to a new “study” (a term I use very, very loosely), Philadelphia is now the 6th rattiest city in America, up (down?) from 7th last year.

It was kind of the Sporting Gods to give us a day of rest after that intense weekend! But you have to wonder if they sometimes don’t know what the other hand is doing. Tonight’s scheduling is a bloody mess. The Sixers, who went undefeated in their four preseason matchups, start their regular season in Boston with a game against the Celtics, slated for 7:30. (Don’t miss my colleague David Murrell’s warm, funny profile of Sixers guard Tyrese Maxey!)

Don’t get too settled, though, because the Phils’ first game in the National League Championship Series against the Padres is set for 8:03. Honestly, what is the point of the bizarrely exact start times? There are always, like, 20 minutes of bullcrap and commercials before things actually begin. I guess we should all just be grateful to live in an era when we can switch back and forth with a click of the remote instead of having to get up from the sofa and go turn the damn dial. Sixers on TNT; Phillies/Padres on FS1.

And it’s my volleyball night.