Plus, the City of Philadelphia's former treasurer obtained his citizenship fraudulently and didn't bother filing his taxes. Because of course. 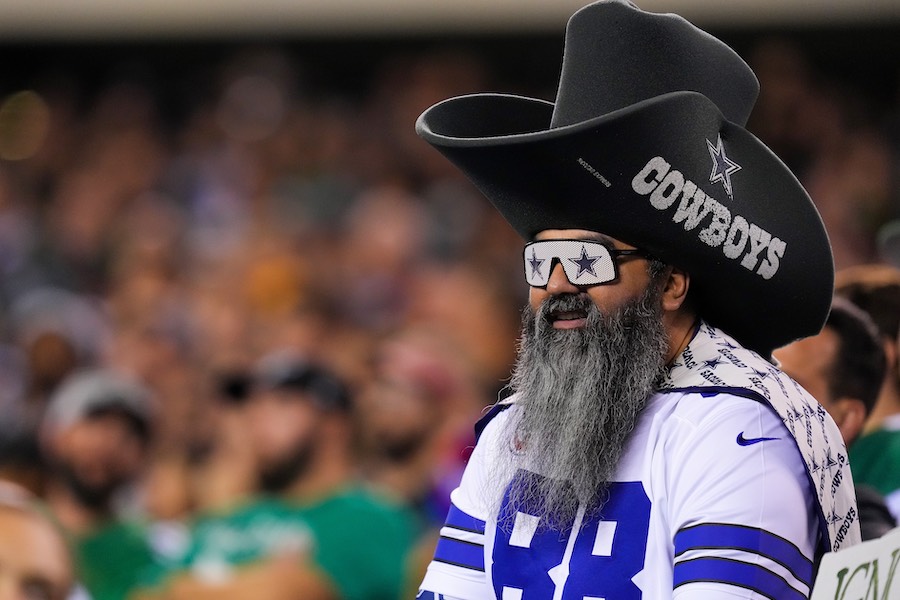 Even this Cowboys fan who was in Philadelphia for the Cowboys-Eagles game must know the truth about his team now: Dallas sucks. (Photo by Mitchell Leff/Getty Images)

After the Eagles-Dallas Game in Philadelphia, Even This Cowboys Fan Knows Dallas Sucks

I usually leave the sports coverage to my esteemed colleague Sandy Hingston. She’s the one who brings you her sports musings each morning at the bottom of Philly Today. (Just scroll down for her one-of-a-kind coverage on the magical weekend we just had.)

But Hingston, who is normally the most meticulous and thorough of journalists, somehow missed the Cowboys fan who kept popping up on TV during the Eagles-Dallas game in Philadelphia. I’ve tried my best to identify this guy, but I just can’t seem to track him down. (If you know him, tell him to get in touch with me.)

I think it’s important to call this guy out. Because we Philadelphia Eagles fans — all Philadelphia sports fans, really — have a certain reputation for how we treat fans of the visiting team. And who do we hate more than the Dallas Cowboys? (Why exactly do we hate them so much? Has anybody done a thoughtful history/analysis of this? I’d like to read it.)

In any event, a friend of mine from Delco was at the Linc for the game and happened to be sitting not far from this dude. And he assured me that the Cowboys fan in question went unharmed during the game. Nobody threw a can of Dallas Sucks Beer at him. Nothing at all happened other than some good-natured ribbing.

Perhaps it’s just because Eagles fans took pity on the man, who outlandishly supported a doomed team. Or, perhaps, it means that Philadelphia sports fans really aren’t that bad after all. 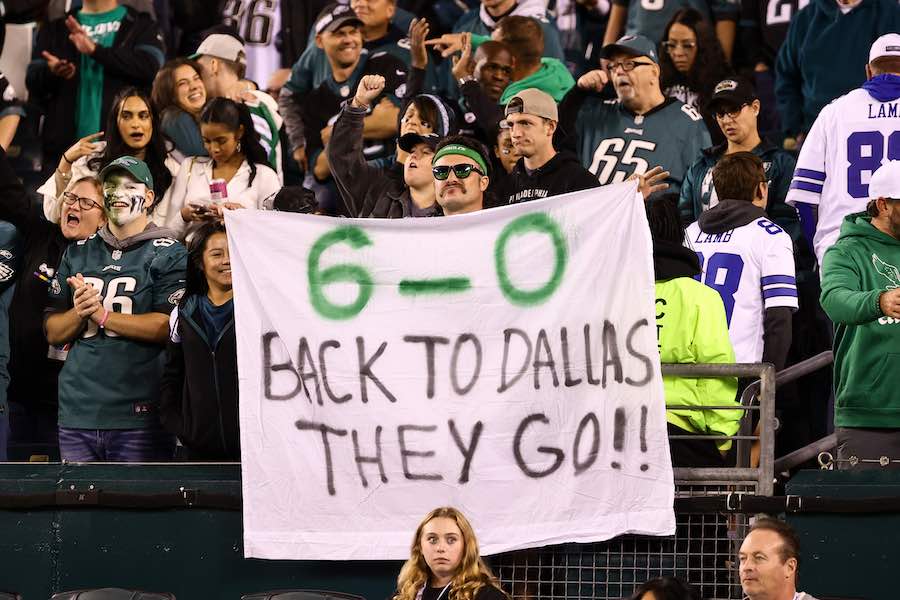 I appreciate the effort at rhyming.

These signs are a little too refined and professional for my taste: 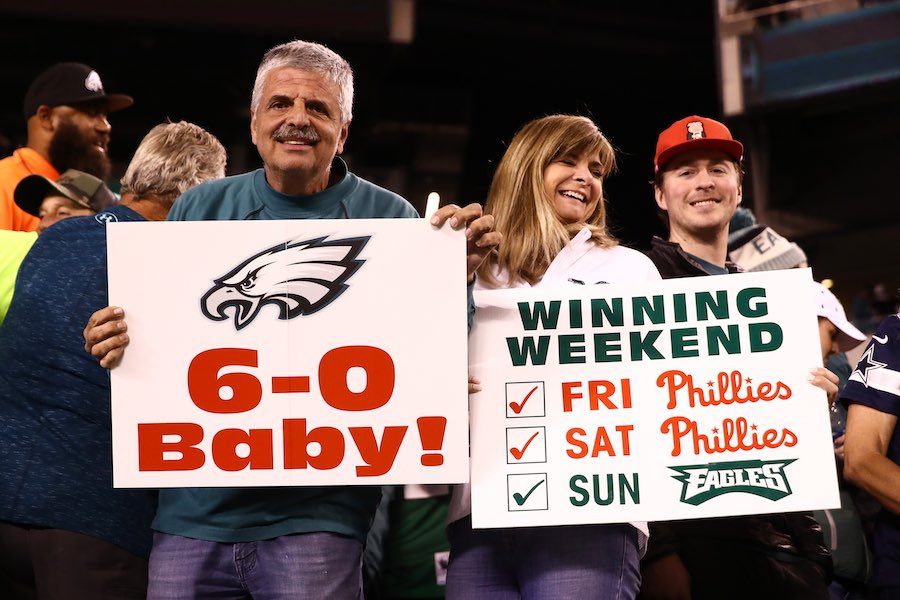 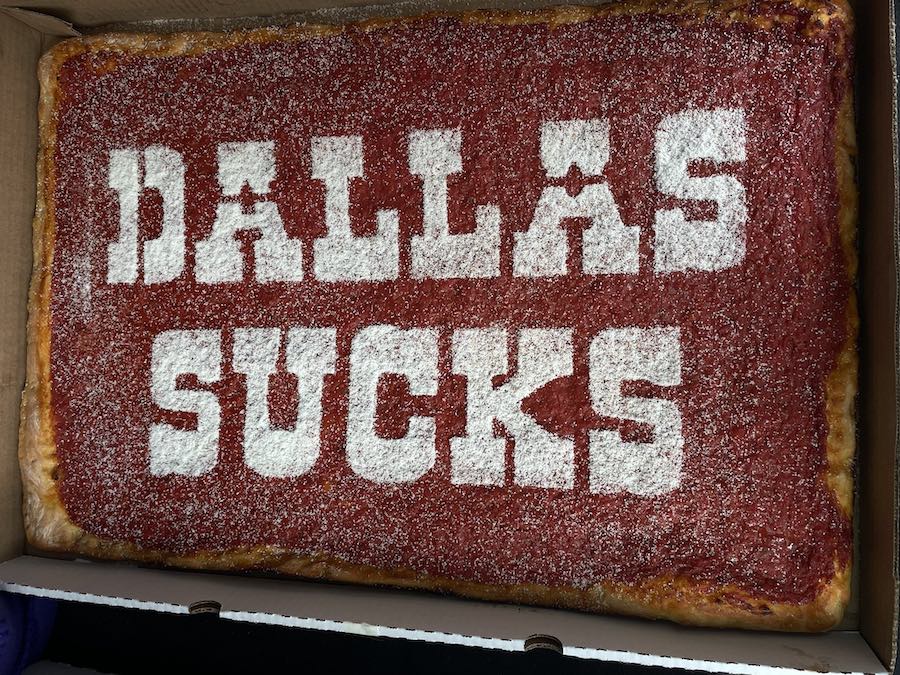 Not Exactly Surprising, But…

The Philadelphia Inquirer just endorsed John Fetterman. The editorial board decided that Dr. Oz is “wholly unprepared to be Pennsylvania’s U.S. senator.” Ouch!

Things Are Looking Up at the Philadelphia Museum of Art

The strike at the Philadelphia Museum of Art is over. Workers and management reached a tentative agreement.

Not Exactly the Qualities You Want In Your City Treasurer

Perhaps the City of Philadelphia should have vetted this guy a bit more carefully before making him the treasurer of the entire frigging city. Pretty sure obtaining your citizenship fraudulently, lying to the federal government and not filing your taxes for years makes you unqualified for the job.

As United States Attorney Jacquline Romero put it, “Christian Dunbar’s conduct in this case demonstrates a shocking level of misconduct for anyone, let alone a senior official within the City of Philadelphia whose job it was to oversee the City’s fiscal stability.” Kind of makes me wonder what ever happened to Corey Kemp.

I see 30s in our immediate future.

And from the Absolutely Giddy With Delight Sports Desk…

Youse guys don’t need us to tell you what went down on Friday and Saturday at Citizens Bank Park. You were there — in spirit if not in body — just like we were. So we’re going to let Twitter do the recap, with a quick look back at the triumph. Let’s start with Friday’s game — the first playoff game at CBP since 2011. Aaron Nola pitching for us; Spencer Strider on the mound for the Braves. There was the fan anticipation ahead of time, on the subway:

Everyone at the City Hall stop on the way to the Phillies pic.twitter.com/ke19LpDeJO

And in the stadium parking lot:

Funnier fans and the added bonus of not having a racist chant #phillies https://t.co/012VvAgzRB

And the crowning touch by Rhys Hoskins:

On to Saturday! We got this, right? There was the Brandon Marsh homer:

Phillies fans toss back a Braves home run ball that made the score 4-2 in favor of the home team.pic.twitter.com/S6h3moMC1Y

INSIDE THE PARK HOME RUN FOR J.T. REALMUTO ARE YOU SERIOUS pic.twitter.com/5TBD6ejtyo

The Process 🤝 The @Phillies pic.twitter.com/wj4rJRzHc6

A check-in from the First Lady:

You’ve got this, @Phillies — I’m watching the game on my way to Orlando! #RingTheBell pic.twitter.com/IsS5l0YMhJ

Then Seranthony Dominguez strikes out Travis D’Arnaud, and it’s all over except for the clubhouse celebration:

Kyle Schwarber brought this song into Phillies clubhouse for the celebrations pic.twitter.com/Kb1TG9mf7w

Not to mention the ouside-the-clubhouse celebration! We love you, Phillies!!!

A win and celebration 11 years in the making. Citizens Bank Park is LOUD from a mile away. #RedOctober pic.twitter.com/e8V9CmHVRS

On to the Eagles! Oh, looky who’s tossing a football on the sidelines!

And with Jill Biden!

A Fetterman ad casts a bit of shade on the good doc’s bona fides:

"Big time Eagles fan" Dr. Oz will be watching tonight's game from one of his 10 homes (and cheering on the Cowboys, let's be honest) pic.twitter.com/dhoo6MYQkF

A sloggy third quarter seemed to suck the energy out of the Linc, as Dallas brought it to a three-point game before the fourth began and the Iggles scored another TD. They went for the two-point conversion and blew it, though, and Philly was on edge again until C.J. Gardner-Johnson came through with the big pick of a Cooper Rush pass in the fourth quarter. (Thanks for the rush, Brandon Graham!) Things looked to be well in hand until — oh holy shit, with 2:46 left in the game, there was a fumble by Hurts, who’d been so good so far! But Jason Kelce, bless his soul, fell on it — crisis averted! Arryn Siposs punted to the 11-yard-line. Are you having fun yet, Philly? No!

It was 26-17 with two minutes left, and Dallas was on the move. The defense stepped up, and the announcers were theorizing about a TD and an on-sides kick when Brandon Graham struck again, knocking a Rush pass away. Darius Slay slapped another pass awry. Field goal attempt! But Brett Maher missed, knocking it just barely to the right, and the Eagles were sitting pretty. With 54 seconds left, fisticuffs! Kelce vs. Osa Odighizuwa! Penalty was on Dallas, and the clock runs out. Yee-haw! We’re 6-and-0!!! What a weekend! God, what a town!