From Congresspeople with actual impeachment votes to city and state legislators, the calls for removal, impeachment, and criminal prosecution are coming fast and furious. 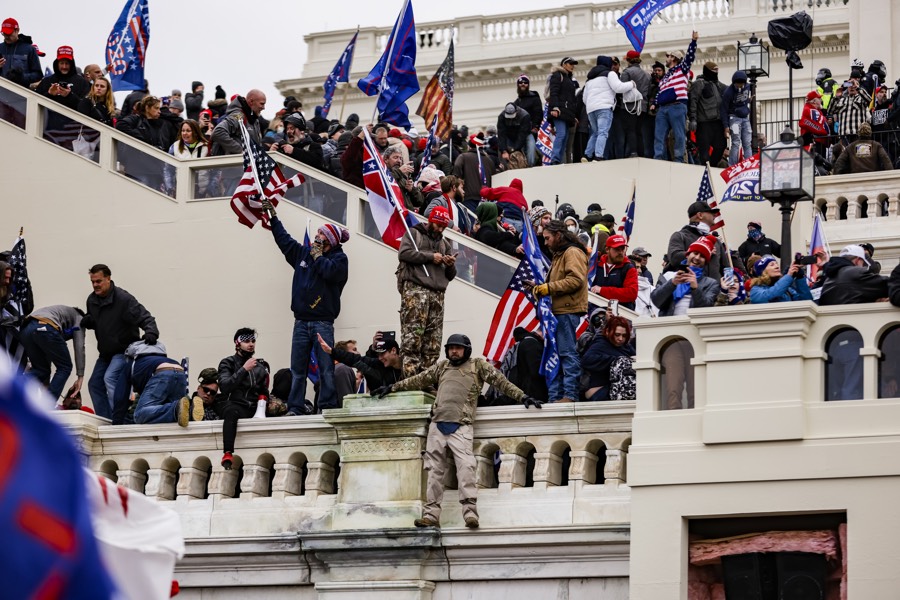 After the pro-Trump mob laid siege to the U.S. Capitol, Philly politicians aren’t holding back in their condemnations of the politicians who enabled it. Photo by Samuel Corum/Getty Images

To think that this week began with the Republican leadership in the state Senate refusing to seat Democrat Jim Brewster of Allegheny County, who won reelection by 69 votes over Republican Nicole Ziccarelli in a race that was formally certified by state election officials. One might have expected that episode to produce calls for resignations from Democratic politicians across the state. But then the President incited an armed-mob takeover of the Capitol, eight Congressmen from Pennsylvania voted to throw out the state’s presidential election results, and it later became apparent that two state politicians, former representative Rick Saccone and current senator Doug Mastriano (who happens to be a rumored GOP candidate for governor in 2022), were among those who marched on the Capitol. Sorry, Jim Brewster. Hopefully, we’ll get back to you — once the political world finishes calling for resignations, impeachments and prosecutions relating to the later events of this week.

Here’s the list of those politicians who have called for consequences:

Whom he wants out: Trump, still

What’s he saying: “Yesterday, domestic terrorists, inspired, encouraged and emboldened by President Donald Trump, attacked the U.S. Capitol Building in furtherance of an attempted coup. … I call on Vice President Pence to invoke the 25th Amendment and begin the process of removing the powers of the presidency from Donald Trump.”

Whom he wants out: Trump

What he’s saying: “I have repeatedly voted for impeaching him because he is unfit for office — and yesterday just proved that all over again.”

Whom he wants out: Trump

What he’s saying: “This is the most dangerous 13 days America, and indeed the world, has faced since October 1962. Then, the threat was external. Now, it is from within. Donald Trump must be removed from office immediately, whether by invoking the 25th Amendment or impeachment.”

What she’s saying: “Trump is unfit to serve. Whether it’s the 25th Amendment or we have to impeach him for a second time, Trump must go.”

What she’s saying: “I believe the President has abdicated his responsibility to safeguard this nation. Today, I am urging the Vice President and members of the Cabinet to invoke the 25th Amendment. … I do not make this grave recommendation lightly. There is such division in this country, and I believe that we must do everything in our power as elected leaders to heal this nation. … But I am simultaneously bound by the Constitution. … ”

What she’s saying: “Yesterday’s attack on our Capitol was a form of insurrection instigated by a sitting president. If Vice President Pence does not immediately invoke the 25th Amendment, Congress must impeach and remove this president.”

Okay, so those sentiments were strong, if somewhat diluted by the niceties required when one holds federal office. Let’s turn to our state and city legislators for the really good stuff.

Whom he wants out: Doug Mastriano

What he’s saying: “Senator Mastriano perpetrated acts of sedition & insurrection against the United States and must resign or be expelled from the Senate. Yesterday’s events in our capital are the result of a years-long embrace of a hateful and violent ideological movement meant to undermine democracy. Senator Doug Mastriano has been integral to the movement. He encouraged and participated in the seditious attack on Congress and the Capitol. In each of these acts, he disgraced the privilege of being a Pennsylvania state Senator and violated his oath of office to uphold the law.”

Whom he wants out: Trump and Mastriano

What he’s saying: “Justice is NOT Doug Mastriano’s resignation. Justice is an investigation, indictment, arrest, prosecution and conviction. His resignation or expulsion is just what’s necessary in our democracy.”

Whom he wants out: Mastriano

What he’s saying: “From social media reports both before and during yesterday’s insurrection at the U.S. Capitol, it appears that Senator Doug Mastriano was involved in its planning, promoting and execution. Unless he can prove otherwise, he should be expelled from the PA Senate.” (Mastriano has said that he left the scene once he felt the demonstration was no longer peaceful and that he never breached the Capitol.)

On Hawley: “Oddly, Senator Hawley seemed to have forgotten the inconvenient fact that most Rs in both chambers of the PA Legislature voted in favor of the bill that allowed for voting by mail in our Commonwealth. Be that as it may, I’ll look past his oversight if he resigns from office now!”

On Saccone: “This man is a disgrace to democracy and civil society. And as a former member of the PA House, he has dishonored the PA Legislature and should be formally rebuked by the leaders of all 4 caucuses AND charged for solicitation to commit a crime of violence!”

Okay, but what you really want to know is: Has anyone hit the trifecta, calling on everyone — Trump, Mastriano, and the eight Congressmen who voted to overturn the election — to resign? Turns out, yes!

Whom he wants out: The aforementioned “everyone”

What he’s saying: “Watching a Congressman from my own state attempt to disenfranchise millions of Pennsylvanians truly pisses me off. … When I think about all eight, my words are no longer safe for Twitter. They are scoundrels and should resign.”

Whom they want out: Everyone

What they’re saying: In a joint statement, the Philly politicians said, “What we saw Wednesday in Washington, D.C., was insurrection. … They were led by Donald Trump and his enablers across this country, including a sitting Pennsylvania state Senator who joined the insurrection and [eight] Pennsylvania Congress members who voted to overturn the presidential election. Just the day before, in Harrisburg, Republican state Senators denied a duly elected Democratic Senator from taking his seat. … We must expel the insurrectionists, seat Senator Brewster, and move this country forward.”

The Philadelphia Inquirer Editorial Board

Whom they want out: Everyone

What they’re saying: “Any Pennsylvania Republican who continues to charge that there was fraud in the 2020 election should resign immediately and demand a special election for their own seat. If they believe so strongly in election fraud that they’re calling to overturn the presidential race, how can they serve with confidence that their own elections were legitimate?”