For the Mayor to be caught eating indoors at an out-of-state restaurant while his fellow Philadelphians still can't do the same in their own city is a slap in a face to diners and restaurateurs. 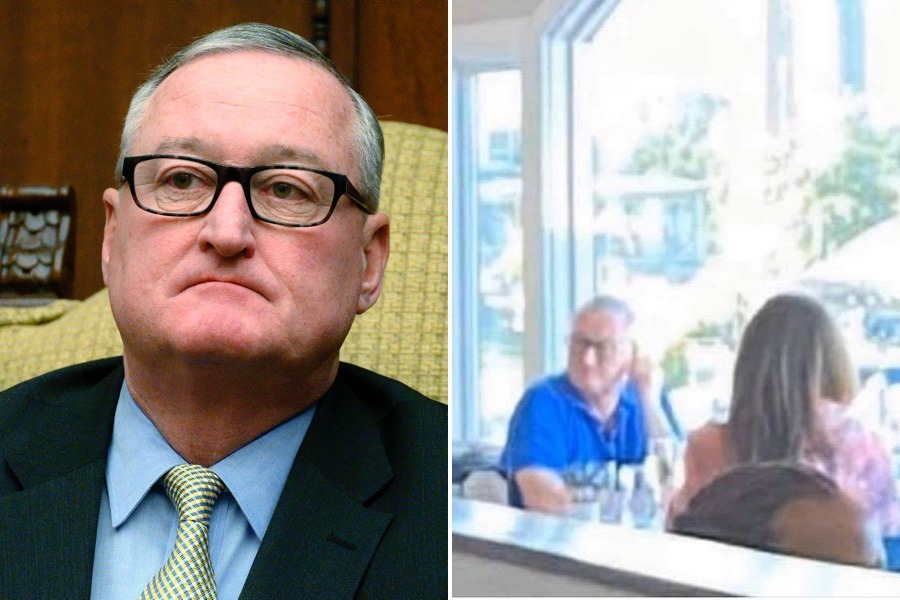 Jim Kenney and a viral image of him eating dinner at a Maryland restaurant over the weekend. Kenney photo by Bastiaan Slabbers/NurPhoto via Getty Images; viral photo photographer unknown.

After a summer of strict (and necessary) COVID-19 regulations surrounding our city’s restaurant scene, Mayor Jim Kenney had to go screw it all up.

When it came to trying to keep Philadelphians safe during this deadly pandemic, this was one of the few stances I could agree with him on. (Protecting protesters and free speech is a different story.) Coronavirus is disproportionately killing people who look like me, so serious precautions in the name of risk-reduction are a worthy cause.

That’s why when the city waited to open restaurants back up indoors until after Labor Day, I bit the bullet. I’m a die-hard foodie, one who loves supporting our city’s incredible restaurants in person as much as I can. I haven’t traveled outside of Philly since the pandemic hit, and most of the places I still frequent (such as my massage parlor) would have made me quarantine at home for two weeks had I done so. Like many Philadelphians, I understand that just because we’re “over” the pandemic doesn’t mean the pandemic is over.

“We need to follow what we are being asked to do by the health department,” Kenney said earlier this month when he announced new indoor dining policies. “I beg you to follow the rules.”

Considering this, it should have been clear that what’s good for the goose should be good for the gander. But I guess that doesn’t apply when you’re Mayor Jim Kenney.

Over the weekend, social media busted him for eating out indoors (unmasked) at a restaurant in Maryland. Everyone, including top chef Marc Vetri, has called out his hypocrisy at a time when our city’s restaurants are being hit hard.

Isn’t it nice Philly Mayor Jim Kenney can enjoy indoor dining in MD while the restaurants in Philadelphia remain closed for dining indoors until Sept. 8. pic.twitter.com/LKDiOkLpvH

Mayor Kenney is a fraud. https://t.co/x4jzzhyjHd

@phillymayor can you please tell us how you justify dinning indoor in Maryland while you have us closed in Philly? Thank you for show us you don’t care! #philly #eatlocal #blackexcellence #thisshallpass #phillylove

“The Mayor went to Maryland earlier today to patronize a restaurant owned by a friend of his,” a city spokesperson told the press in a statement. “For what it’s worth, he also went to Rouge to enjoy outdoor dining in Philly on the way home. He looks forward to expanding indoor dining locally next week.”

In addition to deferring to the health commissioner, “who in this case felt strongly about waiting until September 8th to resume indoor dining,” the statement takes an unfortunate (and unnecessary) turn.

“Of course we understand the frustrations of local restaurant owners who have been among the hardest hit by the pandemic,” the statement adds. “But there are 782 total cases in the county the Mayor briefly visited, compared to over 33,000 cases in Philadelphia. Drastically different circumstances.”

So we’re now comparing counties? So it’s okay for the Mayor to go eating indoors in out-of-state restaurants while his own city is still being told to “follow the rules” and remain patient?

Leadership is about setting an example. If your city can’t eat indoors, you shouldn’t be able to, either. It’s an embarrassment that someone leaked a photo of our mayor stepping out, given how high tensions are around our struggling restaurants. This was a betrayal of our loyal city and a major blow to reasonable efforts to establish COVID-19 restrictions.

I fear that hell is about to break loose, as those who have tried to abide by the city’s efforts will now go rogue. And it’s all because our mayor has completely undermined his credibility. Will restaurants follow Kenney’s health protocols once those restaurants can resume indoor service, now that trust has been breached? If Kenney had just waited a week, or announced he was going to be doing this as, say, a fact-finding expedition, it wouldn’t be a thing. Instead he has undermined his authority on this and will ultimately risk the lives of more Philadelphians.

The Mayor pretty much implied that because of our city’s inability to contain COVID-19 cases, he felt justified eating elsewhere. Philadelphians don’t play that, and I think this backlash will change the narrative around the safety of indoor dining and further energize the drive to support our restaurants. It might also pose a risk to the city’s concerted efforts to combat this pandemic. Who cares to “follow the rules” if the Mayor appears to be disregarding them?

After September 8th, Philly’s restaurant scene is about show up and show out — and hopefully it won’t come crashing down. But make no mistake about it: Nobody wins when the family (in this case, our restaurants and the city) feuds.