"I beg you to follow the rules," Mayor Jim Kenney pleaded with restaurants and customers on Thursday. 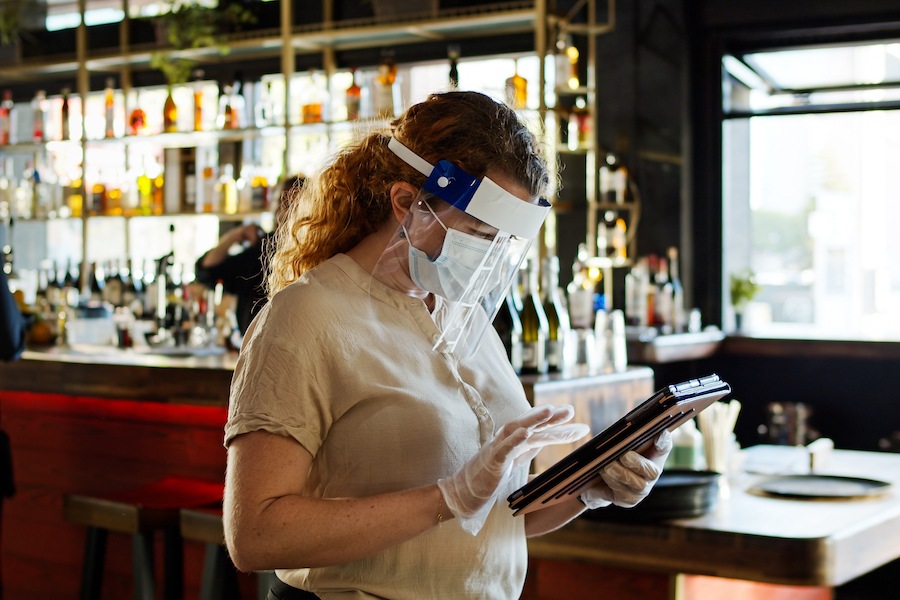 When indoor dining returns to Philadelphia restaurants on September 8th, your server will probably look something like this. (Getty Images)

If you’ve been championing the return of indoor dining in Philadelphia, we have good news for you. And if you think eating and drinking inside a room with a bunch of strangers who are obviously not wearing masks is a really dumb idea, consider it not so good news. On Thursday afternoon, Philadelphia Mayor Jim Kenney and Philadelphia health commissioner Tom Farley announced that indoor dining will return to Philadelphia on Tuesday, September 8th — the day after Labor Day.

“I hope this change on September 8th will mark a turning point in our recovery,” Kenney told reporters. “Let’s not push the envelope. Let’s follow the rules… I beg you to follow the rules.”

And plenty of rules there shall be when Philly restaurants are allowed to offer indoor dining for the first time since March. Most of these rules are consistent with what the rest of the state has already been doing.

So why now? Or, rather, why September 8th?

Farley says that the city devised a variety of benchmarks in June for when things could begin to open in a real way. Metrics including the city’s COVID case rate, the contact tracing program, and general trends in diagnoses were all included in that process. And according to Farley, we are finally where we need to be. He said that the city decided to wait until the day after Labor Day to avoid any large groups intent on gathering over the holiday weekend.

And Farley warned restaurants that his inspectors will be out to make sure everybody is doing the right thing.

“If we find diners crowded together, we will be quick to close restaurants,” Farley insisted.

Twelve years ago, a senator named Barack Obama came to the Constitution Center in Philadelphia and delivered a historic speech about race. It was titled “A More Perfect Union.” And if you need some inspiration (don’t we all?) you can watch it here. Some believed that it was that speech that secured Obama the Democratic nomination and the presidency.

On Wednesday night, Obama delivered another important speech in Philadelphia. This time, he went to the Museum of the American Revolution to tell the country why we should vote for Joe Biden and against Donald Trump.

Here’s part of what the New York Times had to say about the Obama speech at the DNC:

Barack Obama ignited his political career at the 2004 Democratic National Convention, where he linked his story, of growing up as a biracial “skinny kid with a funny name,” to America’s.

On the third night of the 2020 D.N.C., as he sounded an alarm not just about his legacy but about the health of democracy, his platform could hardly have been bigger. Or smaller.

He stood in the Museum of the American Revolution in Philadelphia — alone, like nearly every convention speaker in the pandemic. There were no cheers, no placards, no responses to his calls. There was just the same speaker, older, sadder, but trying to convince his audience that, if they acted urgently, his 2004 faith could still be borne out.

It was a Barack Obama quieter and louder than we had heard before. The audacity of hope was tempered by the veracity of the stakes.

Watch the full video below:

Philadelphia public school students are going back to school virtually in September. But what does that mean for children who don’t have a safe or appropriate home in which to learn.

The city just announced that it will open 31 “access centers” for students beginning on September 8th. These will be places where students — around 22 of them in each site — can go for their digital learning. The sites will be supervised and meals will be provided as well. Given those numbers, space is obviously limited, and applications will be taken beginning next week, the idea being that these sites are to serve the most vulnerable children. More sites will be added in the future.

“The city is committed to being a partner in our children’s education, especially as COVID-19 creates new challenges for families and students,” said Mayor Kenney in a statement. “As we prepare for nearly all Philadelphia students to participate in online learning at the start of the school year, we’ve redeployed our resources and engaged partners to create PHLConnectED and a network of Access Centers. These programs will help low-income families with their internet access and childcare needs during digital learning, and reduce the pandemic’s threat to our children’s education and their families’ stability.”