If You Have a Brilliant Idea to Combat Gerrymandering, Please Go to This Meeting

Gov. Tom Wolf’s commission to figure out how to create fair congressional districts stops by Philly on Tuesday afternoon. 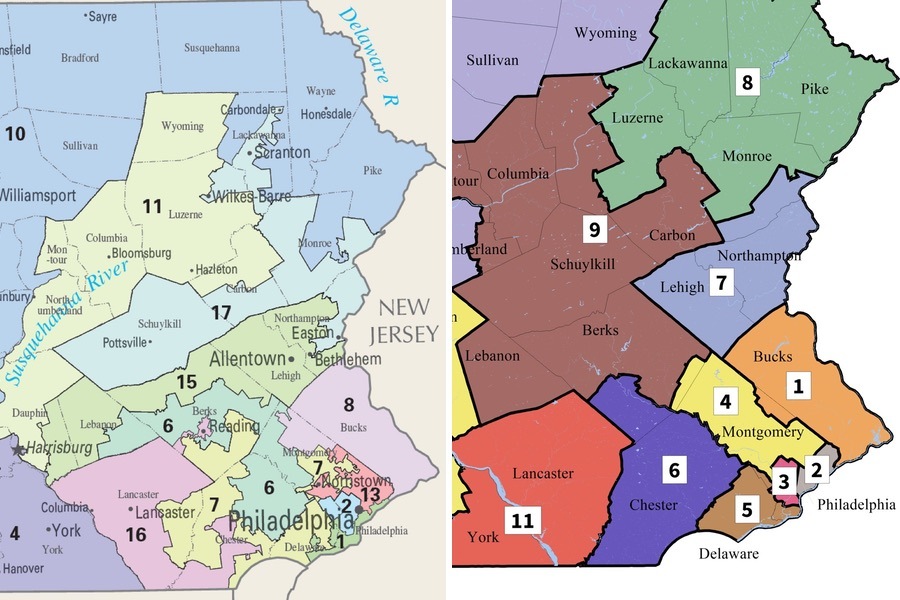 Pennsylvania’s congressional maps before (left) and after the 2018 Pa. Supreme Court–ordered redistricting.

When something controversial comes up in state politics, Gov. Tom Wolf seems to like convening a statewide listening tour on the subject. Lt. Gov John Fetterman just finished crisscrossing the state to talk to citizens about legalizing marijuana, and now, on Tuesday, a governor-sponsored commission is stopping by Philly — this time to talk about gerrymandering.

Gerrymandering — the drawing of voting districts to favor a particular party — has of course been top of mind for voters and legislators given the upheaval that occurred with Pennsylvania’s congressional district map last year. To recap: In January, the state Supreme Court deemed the old map unconstitutional for unfairly benefitting Republicans;  Republicans proposed a new map, promptly rejected by Wolf; given the failure of lawmakers to compromise on a reasonable new map, the court stepped in to draw its own; Republicans said that map was also unfair, but the U.S. Supreme Court disagreed; and so the current map was born.

Well, the merry-go-round might soon restart, because our regularly scheduled redistricting process is set to get underway in 2020, prompted by the new U.S.census. (Even the seemingly boring census hasn’t been immune to political controversy — a real sign of the times.)

The whole idea behind this redistricting commission, which was established by executive order last November and has already made five stops across the state, is that maybe, just maybe, the citizens of Pennsylvania might have an idea or two about how to come up with a compromise and avoid the usual partisan rancor and gridlock. According to an online feedback form published by the commission, you can expect questions like this: “What types of criteria or values do you believe should be prioritized in the redistricting process in Pennsylvania?” and “Who do you believe should draw, change, or approve the maps in Pennsylvania?”

You’d have to be pretty optimistic to think this feedback tour is going to affect much. Ultimately, it’s up to the state legislature to draw the maps and the governor to approve them. The combination of a Republican statehouse and Democratic governor is like a potion specifically concocted to prevent compromise.

But maybe the government just hasn’t heard your great idea that will solve the entire problem of partisanship and gerrymandering!  If so, you should do us all a favor and share it with the commission, which is holding its Philly meeting at the Tindley Temple United Methodist Church at Broad and Fitzwater from 4 p.m. to 7 p.m. If you can’t attend in person, you can still chime in with recommendations through the online form here.