How Pa.’s Gerrymandering Decision Could Affect the 2018 Primary Election

The state Supreme Court’s ruling that our current congressional district boundaries are unconstitutional could have far-reaching political implications. Here’s what you need to know. 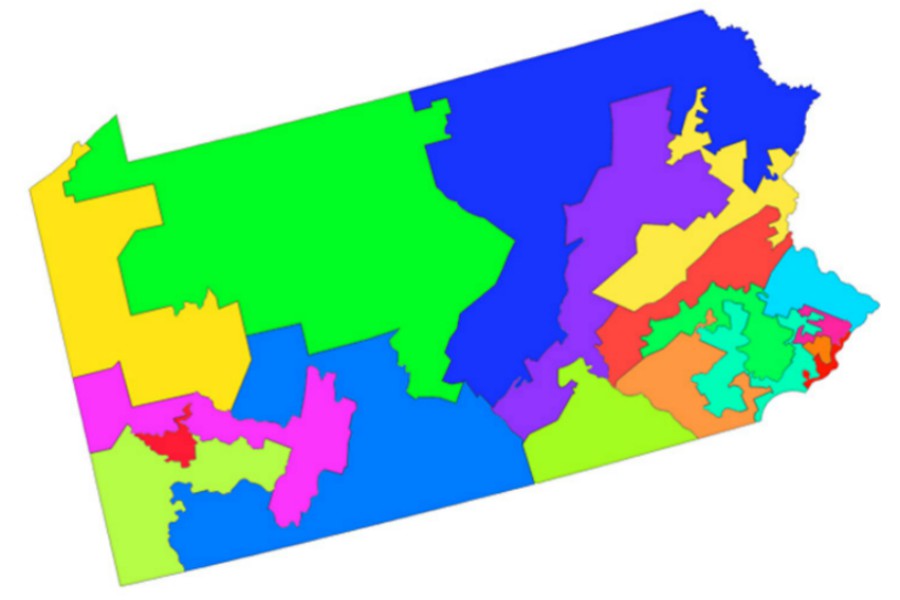 The Pennsylvania Supreme Court has ruled that the state’s Congressional map “clearly, plainly and palpably” violates the state constitution.

It’s the latest of several recent court decisions recognizing and condemning the practice of gerrymandering, or the act of manipulating the boundaries of congressional districts to give one party an advantage.

The implications of the decision could be significant for Pennsylvania politics, as we’ll see in the next few weeks and months leading up to the May primaries. Here’s what you need to know right now.

Pennsylvania’s most recent congressional map – drawn in 2011 – is among the nation’s top three congressional maps showing “the most extreme levels of partisan bias,” per the New York-based Brennan Center for Justice, a nonpartisan public policy and law institute. Since the map was adopted, Republican candidates have held onto 13 of the 18 seats in the U.S. House of Representatives, even after elections that won them just about half the statewide congressional vote.

This past summer, the Pennsylvania League of Women Voters (and 17 individual voters) filed a lawsuit in Commonwealth Court claiming the “gerrymandered” map gives Republicans a significant advantage and needs to be tossed. That suit eventually found its way to the state Supreme Court, which made its decision on Monday, less than a week after hearing arguments.

We have been fighting it on all fronts for 25 years. And will continue with our allies to do so until there's a fair process in place for all PA voters. @FairDistrictsPA @PubIntLawCtr @commoncausepa @Committeeof70 @pachrchadvocacy & more https://t.co/yHcCFFCCQW

Similar efforts have been underway across the country. For an explainer on gerrymandering, the main issue at hand, visit FiveThirtyEight.

Reactions From Both Parties

Senate Republicans say they’ll seek a stay from the U.S. Supreme Court, which would put the decision on hold.

In a statement, Senate President Pro Tempore Joseph Scarnati and Senate Majority Leader Jake Corman said the ruling “is a partisan action showing a distinct lack of respect for the Constitution and the legislative process.”

“The PA Supreme Court has overstepped its legal authority and set up an impossible deadline that will only introduce chaos in the upcoming Congressional election,” they added.

“I strongly believe that gerrymandering is wrong and consistently have stated that the current maps are unfair to Pennsylvanians,” Wolf said in a statement. “My administration is reviewing the order and we are assessing the executive branch’s next steps in this process.”

Yesterday, @SupremeCtofPA ruled PA's congressional map unconstitutional and ordered the legislature to submit a new plan to me on or before February 9, 2018. I will not accept a partisan gerrymander or a map that is unchanged from the one drawn in 2011. pic.twitter.com/hmt8VZ3S47

The state Supreme Court, the majority of whose justices are Democrats, ruled that the map’s 18 congressional Districts were drawn to disadvantage Democrats. Assuming the Republicans’ stay effort fails, the state’s 2011 congressional map will be invalid for the Pennsylvania primaries on May 15th, which includes elections for congressional representatives as well as governor, lieutenant governor, and state senators and representatives.

Republicans must act fast if they want to propose a new map. Per Monday’s decision, the GOP-led state legislature must draw a new map and submit it to Gov. Tom Wolf by February 9th. Then Wolf must approve those plans by February 15th. If he does, the map will go to the state Supreme Court for final approval.

If Republicans fail to draw a map (or Wolf or the Supreme Court do not approve of their map), the court will hear from both parties and then “expeditiously” adopt its own redistricting plan, per Monday’s decision.

A new congressional map could even the playing field between Democrats and Republicans. To get their map approved by Wolf, Republicans will have to attempt to make it bipartisan – or else risk having the court commandeer the process.

According to the court order, the state’s congressional maps from here on out must consist of:

Some say a new map in Pennsylvania could result in the creation of several Democratic-leaning districts, which would make Republicans more vulnerable in elections.

Why the strict rules? Per the 2011 map, gerrymandering was plainly evident in the creation of, for example, the state’s 7th Congressional District, which many say resembled “Goofy kicking Donald Duck.”

Others have made similar observations.

People talk about PA's 7th district looking like Goofy kicking Donald Duck. But no one talks' about the 12th looking like the focal point of Michelangelo's "Creation of Adam." pic.twitter.com/bBlH9u3oFJ

How Will a New Map Complicate Elections?

Justice Max Baer, a Democrat, agreed with the decision to void the state’s current congressional map. But he also argued that a new map shouldn’t take effect until the 2020 election cycle.

Baer said the hasty timeline risks “serious disruption of orderly state election processes and basic governmental functions.” He worries that changing district boundary lines so quickly could result in both incumbents and challengers no longer living in the districts where they’ve campaigned.

Instead, he claims, delaying the creation of a new map would allow “ample time for our sister branches of government to comply … as well as providing candidates and their supporters the opportunity to campaign in their newly established districts, and, most importantly, to reduce the risk of voter confusion.”

Two other justices took issue with the decision on Monday. Chief Justice Thomas G. Saylor and Justice Sallie Updyke Mundy, both Republicans, wrote dissenting statements arguing that the U.S. Supreme Court should have the last word on the case.

Legislators across the country have debated the extent to which gerrymandering is a state or federal court issue. But local law experts have pointed out that the Pennsylvania Supreme Court has the final word on state law.

From a political perspective, the state-court Pennsylvania partisan gerrymandering case is the one to watch because the PA Supreme Court has the final word and could decide the case in time for the congressional map to be redrawn for 2018. #fairmaps