Gritty Nominated Himself for TIME’s Person of the Year 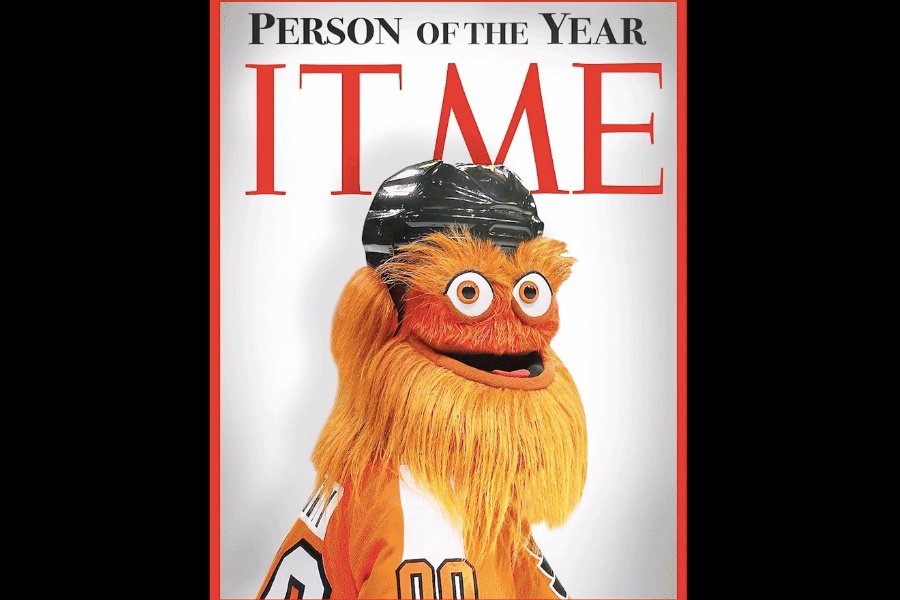 This Gritty TIME cover — err, “IT ME” cover — is what the world needs now.

TIME magazine has chosen a Person of the Year annually since 1927. Every year, leading up to the publication’s announcement, the country thinks long and hard about who the chosen one could be, eagerly anticipates the answer, and then watches to see how the magazine’s choice corresponds to and influences the year’s events.

Every year, that person is a notable human. A human. Not an otherworldly, googly-eyed, orange-maned beast. But this year, that could change. Maybe.

Gritty has nominated himself for TIME’s Person of the Year (despite not even being included on the magazine’s first unofficial list of possible contenders), and we’re here for it.

I mean, sure, he’s not technically a person (is he?), but can you think of a more beloved, omnipresent, influential character this year? Anyone who’s made more (Philly) headlines than he has? Personally, I can’t remember ever writing about anything more than Gritty, except for maybe, the Super Bowl, which could be nominated for The Best Underdog Win in History.

In case you don’t believe me, here are a few things Gritty has influenced: A craft brew named Nightmare Fuel. An episode of The Tonight Show with Jimmy Fallon (in which Gritty fights with Ricky Gervais). Kim Kardashian‘s internet-breaking Paper magazine cover (or was that the other way around?). A SEPTA mascot competition. Cheesesteaks. Bobbleheads. Halloween costumes for humans, dogs and cats. Lefty protest signs. Philly’s entire anti-fascist movement. A City Council amendment. Petitions to replace the South Philly Frank Rizzo mural. Wedding cakes. Ice cream sandwiches with Doritos crumbles. That’s just to name a few. I mean, Gritty is like, the star to book at your Philly event now — city agencies and local organizations are all scrambling to have him on board.

Even if TIME magazine goes with someone else for its Person of the Year cover, one thing’s for sure: To us, 2018 will always be The Year of Gritty.