Gritty Gets a Beer Named After Him: Nightmare Fuel

We think our new mascot would prefer a Yuengling or Bud Light over a craft brew — but the name is dead accurate. 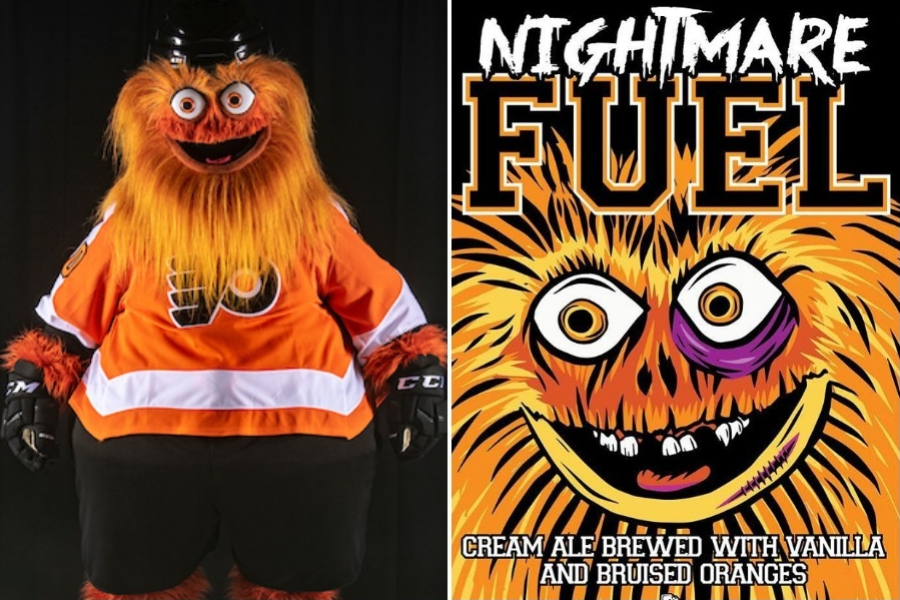 Philadelphia is clearly still divided over whether or not the new Flyers mascot is exactly what the city needs — the next Phanatic —or Satan’s unfortunate spawn. Or both.

Surely, we’ll continue to argue (and create some of the world’s best memes and internet wins) for weeks to come. And soon, we can do so over a brew or two — named for Gritty himself.

Broken Goblet Brewing in Bucks County has invented a beer just for Gritty, and here’s one thing we can all agree on: the name of the beast-inspired brew, Nightmare Fuel, is dead accurate.

The brewery will release Nightmare Fuel on Saturday, October 13th — in the form of “very special” limited edition crowlers (like, growlers in cans), as well as draft. The brew will be a “lightly hopped cream ale brewed with vanilla and ‘bruised and bloodied’ oranges,” according to Broken Goblet.

“Resin and pine from the Chinook addition, and a touch of Saaz hops accent the sweetness of the vanilla and the tart orange in this fluffy ale,” the business wrote in a Facebook post.

We just hope the crowler has Googly eyes or tufts or orange fur attached to it.

We’re guessing people will want to pay a visit to Broken Goblet Brewing just for this. For those who are getting ideas, it’s located at 1500 Grundy Lane in Bristol, about a 30-minute drive from Center City (or a longer train/bus ride, if you’re really dedicated to our new mascot).

But we’d act fast: Philly loves a good sports-inspired beer (read: Philly loves sports and beer), and if this release goes anything like Bud Light’s Philly Philly packs, it’ll be gone before we know it.

Anyway, now that it’s been a few days (and a few thousand tweets) since Gritty’s shocking debut, what do you think? Do you love him? Do you hate him? Do you want him euthanized? Do you want to sit on a sofa, drink beer and watch TV with him?

Personally, I’ve come to like Gritty in an incredibly short amount of time. Maybe it’s because he’s got the whole world talking about how unbelievably bizarre Philly is, and somehow that feels fitting.