After some stores sold out of the Eagles Super Bowl–themed packs almost immediately, they began showing up on the auction site — one is currently listed for an eye-popping $700. 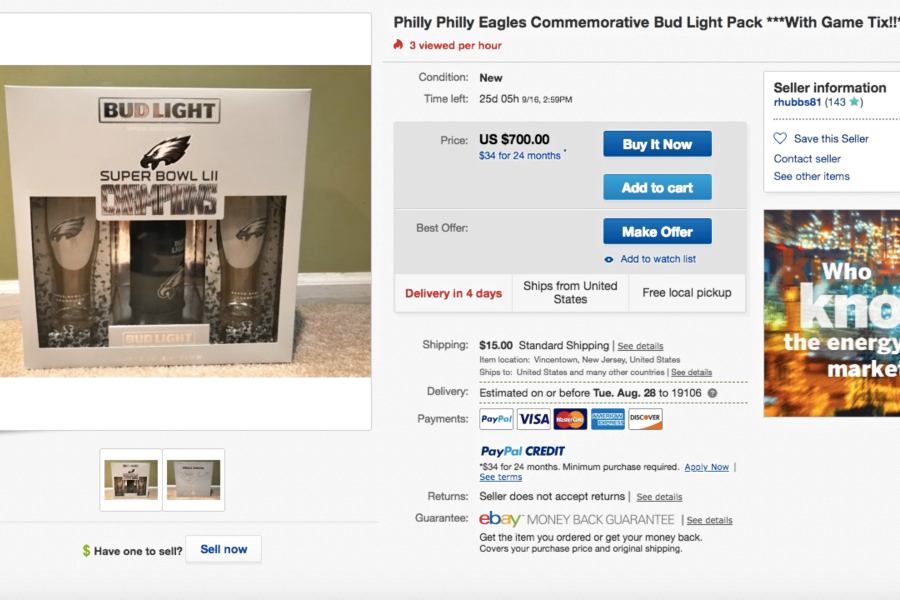 This Bud Light Philly Philly pack, which (reportedly) contains Eagles tickets, is going for $700 on eBay. | Screenshot via eBay

If you grabbed one of the limited-edition Bud Light Philly Philly packs when they went on sale last week, consider yourself extremely lucky.

A quick scan of Twitter will show you that a lot of people weren’t so fortunate.

Eagles fans in Philly — and across the world — are fuming over how hard it is to get their hands on one.

Are you guys just going to make us scavenger hunt all over Pennsylvania for these??

Here’s the deal: AB InBev produced just 20,418 Bud Light Philly Philly packs, which were to cost $29.99 and go on sale at 4 p.m. on August 16th. The company didn’t release a list of places where Eagles fans could buy the pack — it said only that they were solely available in stores (not online) in the Philadelphia area.

The quantity, 20,418, corresponds to the date of the Eagles Super Bowl win (February 4th, 2018), as Bud Light advertised. But considering supply and demand, it’s also a genius marketing ploy.

Less than an hour after the packs went on sale, demand was high. Twitter users started complaining that they were impossible to find.

Some said they simply couldn’t find a store that carried them. Others said stores near them sold out immediately. And then people started lamenting that retailers were increasing the price of the product.

@budlight @AnheuserBusch I hope you’ll be holding your sellers accountable for 200% markups on these gift sets. I find it disgusting that the $30 set is being sold for $150 at a nearby liquor store. I assume this is not part of your business model. #disappointed #FlyEaglesFly

I was just at a location in South Jersey and was charged double the price as advertised. Did anyone else experience this??

Soon enough, people started pointing out that the packs suddenly were available online: On eBay. For as much as $700.

To be fair, the $700 pack includes a pair of tickets to the Eagles’ first regular season game against the Atlanta Falcons on September 6th (or at least that’s what the eBay user claims). Just eight of the Bud Light Philly Philly packs produced and sold contained these tickets, in another genius marketing ploy that might remind you of Willy Wonka’s golden ticket.

Browse the rest of eBay, and you’ll see that the average Philly Philly pack has been selling for $100 to $300 — or you can try bidding for a cheaper price. (Good luck.)

Otherwise, it’s not clear if, or where, you can still buy the Philly Philly packs in stores. Bud Light did not immediately respond to an inquiry on Wednesday morning.

The company is also taking some flak over the fact that the product isn’t quite what was promised: Philly.com reports that press materials had claimed that the pack’s two glasses would feature an etch of the legendary “Philly Special” play — but Twitter users noted no such thing.

I was totally let down when I opened the box and the glasses weren’t etched with the play, as advertised.

The company told the publication that the Philly Special play is still printed on the back of the packs, as advertised, and that it “regrets any confusion this may have caused.”

But most Eagles fans, it seems, would’ve been happy to get their hands on a Philly Philly pack at all — etch or no etch.

We just wonder how much they’ll end up going for on eBay.

I was lucky enough to get one. But it would be nice for Eagles fans outside of Philly (there are a lot of them!) and others who missed out to be able to get something also. Unfortunately the only way they might get one now are those being sold on eBay and other sites for $150+!

Yeh the only way to get them now is buy the 30$ set for over 200$ online…. done dirty by good ole Bud Light…. Miller Lite wouldnt have done that…

Hey budlight how about going after your distributors who are taking away from us fans. It's sickening how many people are trying to sell these on eBay. No way u have this many unless they sell for u.@eBay is allowing alcohol to be sold on their page. Take all of them down. pic.twitter.com/JKpv2u8BxZ

@budlight thank you for giving everyone in philly a chance to win eagles tickets but this is a disgrace that a real fan didn’t get the box set or win the tickets I got one and didn’t win would of loved it instead somebody wins is just going to make Money off of it pic.twitter.com/GbooUEKeSs