The Mushroom Cheesesteak, All Grown Up

In the Cheesesteak Capital of the World, the mushroom cheesesteak is finally getting the attention it so rightly deserves. 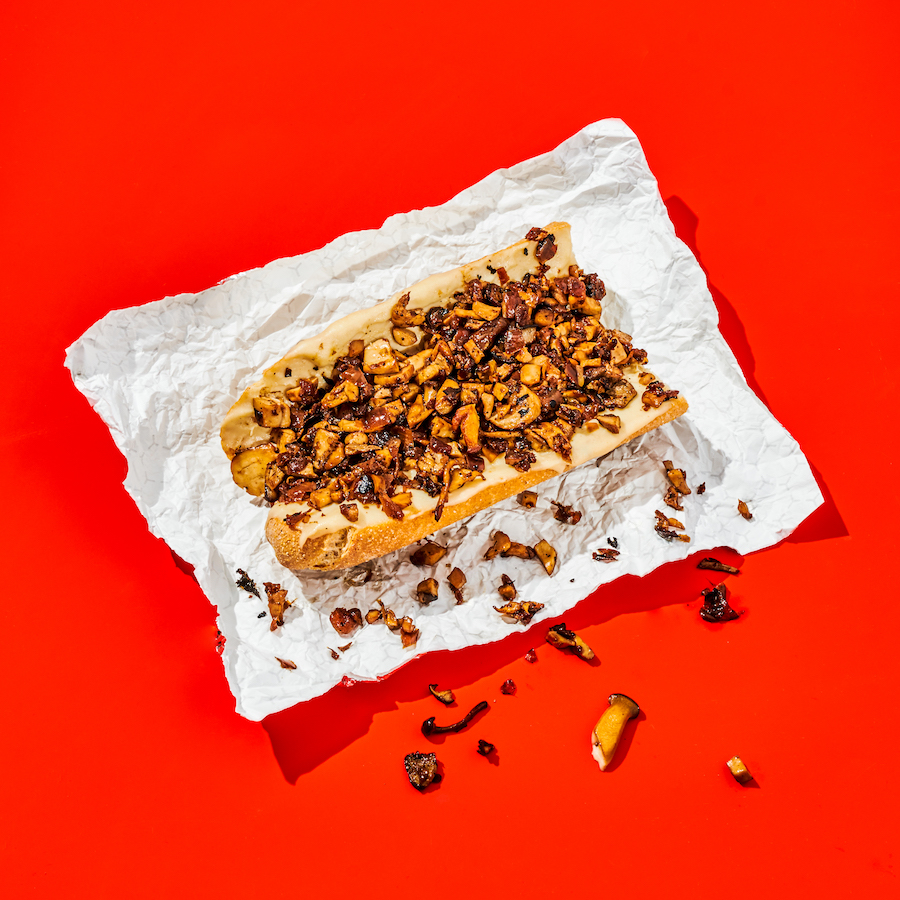 First and foremost, I want to be clear about something: The cheesesteak needs no updating. No new renditions; no twists. It’s perfect the way it is, wherever you order it, because at its best, a cheesesteak — simply made of fresh bread, fatty meat, melty cheese, and onions for sweetness — is a combination of crowd pleasers.

More importantly, though, they’re not …  great for you. Or for the Earth. And these days, you have to consider both those things before you eat anything. That’s the world we live in now. Willful ignorance is a luxury afforded to us no longer.

On your quest to not eat as many cheesesteaks in the Cheesesteak Capital of the World, you stumble across a lot of nonsense: veggie cheesesteaks that include whatever the pizza shop or cheesesteak joint counts as a vegetable (spinach has no business being part of anything called a cheesesteak); seitan cheesesteaks — which, not for nothing, come pretty close to the texture actual cheesesteaks. But eating a sandwich made almost entirely of seitan is what I imagine it would be like to eat a brick. There’s Questlove’s tech-meat cheesesteak that you can only get at the ballpark, and there used to be the Wiz Kid cheesesteak (a nice one made with mushrooms and seitan) by the V Street crew. Wiz Kid doesn’t exist anymore, and neither does V Street.

And then there’s the lowly all-mushroom cheesesteak, so unassuming and so often ignored — mostly because mushrooms in Cheesesteak Land often come canned. They’re wet and flavorless, and add very little to a cheesesteak other than a needless textural difference (there’s already enough texture in fried beef).

But mushroom cheesesteaks, nowadays, aren’t what they used to be. And that’s good news for everyone, meat eaters and herbivores alike. There’s a small contingent of Philly chefs finally giving the mushroom cheesesteak the attention it rightly deserves. They’re better now. More considered. No longer an afterthought. They’re sandwiches worth ordering, regardless of any carnivorous dispositions.

I know this because I just had Frizwit’s Shroomwit — a sandwich made with frizzled mushrooms, creamy caramelized onions, and beer cheese sauce on a squishy Merzbacher’s hoagie roll.

Ari Miller (Musi’s chef-owner and the brains behind his cheesesteak pop-up Frizwit) uses Primal Supply meat and all-local ingredients (down to the canola oil!) in his cheesesteaks. “The same amount of thought and effort goes into both ‘steaks,” he says. “To be honest, if I’m not excited about the sandwich, I’d rather not have a vegetarian or vegan cheesesteak on the menu at all.” So he gets his mushrooms from Mycopolitan, a local sustainable mushroom farm that serves some of the best restaurants in Philly.

“We’d get these gorgeous whole mushrooms from them. The flavor’s there, the integrity’s there, but as a chef, you’d die a little chopping them up like that,” he says. So he started buying Mycopolitan’s trim (the bits and pieces the farm can’t sell).

The result is this wonderful gooey mess of crispy, chunky mushroom bits and gooey cheese. It rocks. The sandwich tries to do everything a regular cheesesteak does, and it mostly succeeds. (I say “mostly” because I don’t think any vegetable can achieve exactly what meat achieves. Nor do I think it should.)

It’s also the same price as a regular cheesesteak, because, as Miller puts it, “that’s what good food costs.” “There’s this thinking that a vegetarian ‘steak shouldn’t be the same price as a meat one, but mushrooms are expensive,” he says. “With a lot of people, there’s a disconnect between food being good and food costing money. I get it because I experience it as well — $15 for a cheesesteak isn’t cheap. But that’s only if you don’t think about it. We haven’t been programmed to think about it. But it’s my professional responsibility to think about it.”

A few weeks ago, chef Andrew Magee got a crew together and popped up at Martha in Kensington with their own mushroom cheesesteak. His includes seven kinds of fungus: a ton of maitake mushrooms (“they get a nice sear”) and creminis (“they have a meaty chew”). He also mixes in a mushroom powder to boost the flavor and and mushroom jerky to get an even meatier texture. Magee, who spent some time in the Vedge and V Street kitchens before landing at Martha, says, “I don’t love mock meats. [Plant-based cooking] has been on the rise for a decade or more now — it’s crazy to see all the possibilities we’ve still yet to explore.”

Which is saying something, because it’s not for lack of trying. This town has explored the hell outta plant-based cooking and plant-based restaurants. I’d go so far as to say we’re a leader in the field. Still, mushroom cheesesteaks never really got the light of day. That was then, I guess.