The 26 Best Vegan-Friendly Restaurants in Philadelphia 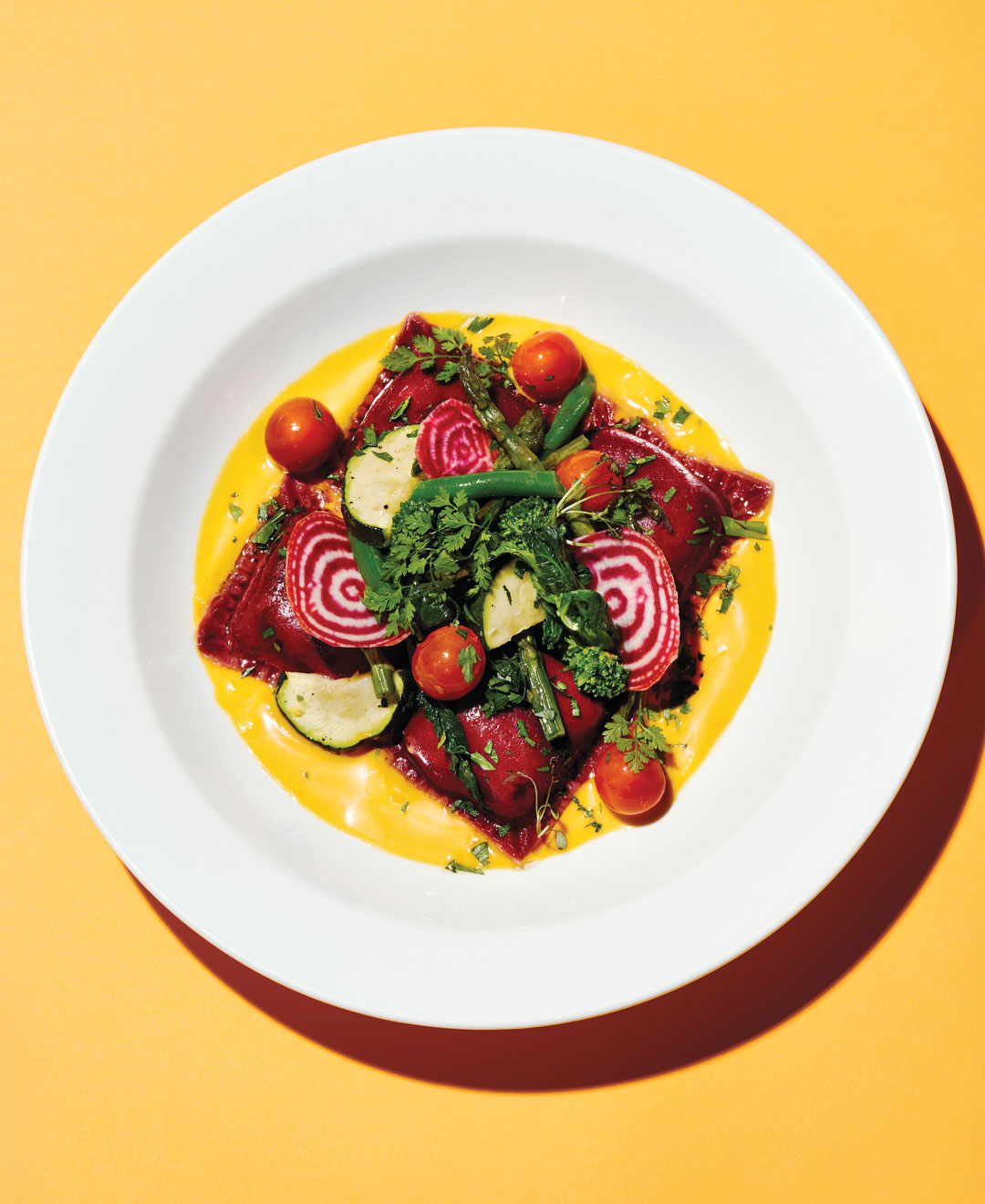 From all-vegan bistros to neighborhood restaurants, meat-and-dairy-free dining is a fad no more.

Order: The Buffalo cauliflower
Front Street does perfectly modern expressions of bar food and is beloved by vegetarians and carnivores alike. This appetizer is pan-fried, spicy, hot and crunchy, and despite the fact that it’s made of vegetables, it has that distinctive junk-food feel. 1253 North Front Street, Fishtown. 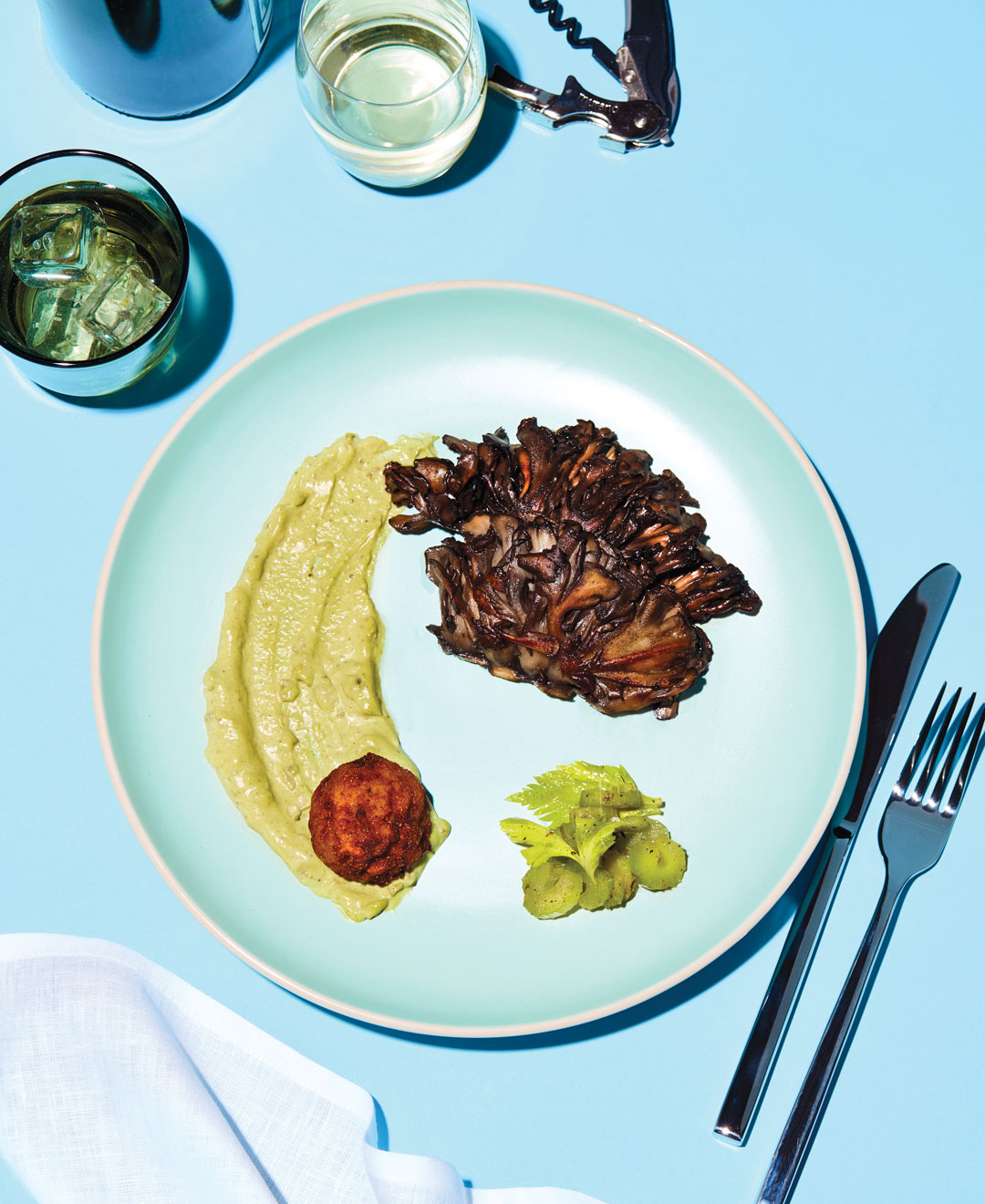 Order: Rutabaga fondue
It is absolutely insane to think that anyone could make a rutabaga sexy — that anyone could make a rutabaga, that most scorned of root vegetables, behave like cheese. And yet that’s just what Rich Landau and his team have done at Vedge. They’ve turned rutabaga into a soft, smooth, silky goop perfect for dipping into with torn hunks of pretzel bread and pickled vegetables. It’s just one of many unusual and brilliant items on the menu. 1221 Locust Street, Midtown Village.

Order: Bar grub
This is a neighborhood bar in the heart of Philly’s foodie-est neighborhood. The fact that it dedicates nearly half its menu to vegan and vegetarian food? That’s just a sign of the times. The fact that it’s actually good is proof the kitchen cares deeply about feeding everyone, not just half the neighborhood. 1338 South 10th Street, East Passyunk. 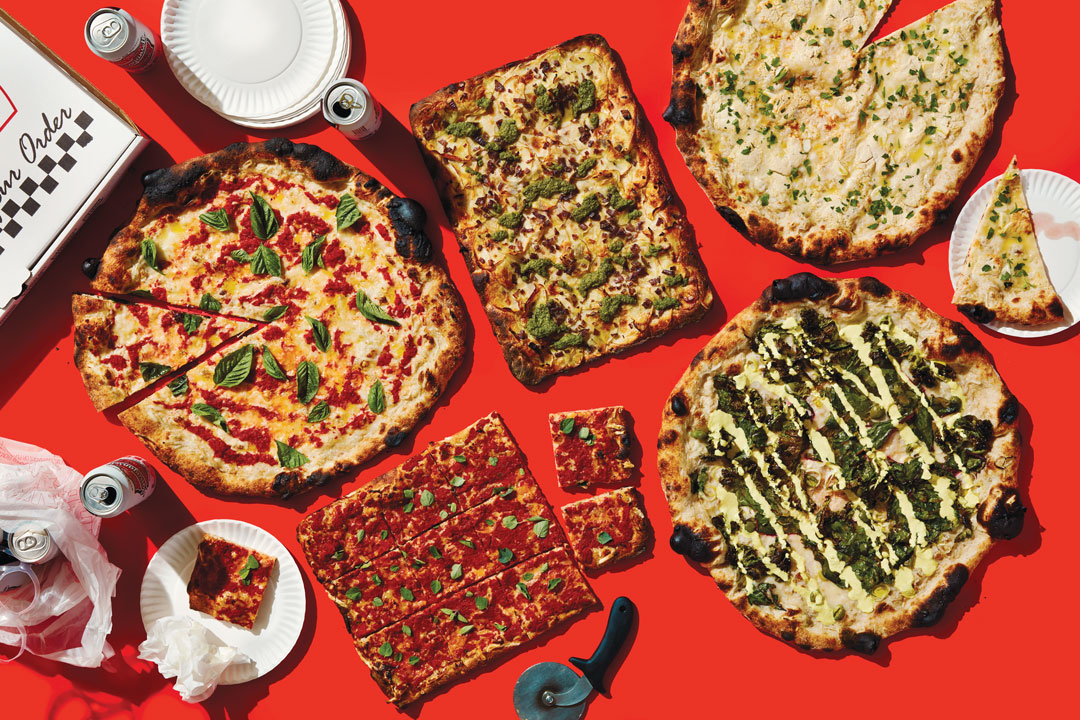 Order: A tehina milkshake
The milkshakes at this Michael Solomonov quick-serve are smart. They’re creamy and decadent and delicious enough that many, many people (even at lunchtime) are carrying one as they walk out the door. Oh, and another thing? They’re completely vegan by design — a perfect example of vegan cuisine adding more than it takes away. 1526 Sansom Street, Center City.

Order: Diner breakfast
Bottomless cups of coffee and big stacks of pancakes, breakfast sandwiches and waffles — the Tasty is a kind of retro-modern breakfast counter. But there are also seitan cheese-steaks for those who come during lunch, tots and waffle fries, coconut or tempeh bacon BLTs, and a vibe that’s as chill and laid-back as at any other diner in the neighborhood. 1401 South 12th Street, East Passyunk.

Order: The Crispy HipCity Ranch
This sandwich trades on the same kind of magic that makes Buffalo cauliflower such a popular app all over the city. It takes a chick’n patty, batters it, then tops it with Buffalo sauce (optional) for a kind of jury-rigged hot chicken sandwich that satisfies any and all deep-fried cravings. Multiple locations.

Charlie Was A Sinner 🌱

Order: Potato croquettes
Charlie doubled down on the whole “cool bar for vegans” trend a few years back and has been evolving ever since — lately becoming a notable spot for small plates and intelligent cocktails. But the smartest thing about the menu is the deliberate mix of vegan dishes (zucchini “crab” cakes) and ones that are simply made out of vegetables (potato croquettes) — a nonsectarian move that makes apostate Charlie all the more inventive. 131 South 13th Street, Midtown Village.

Order: Daily Greens Smoothie
After shutting down due to a fire last fall, Nourish is back open serving fresh smoothies and juices with less-common ingredients like sea moss and mushrooms. They’ve also added on a meal prep option, which will carry you through a week of delicious vegan eating with options like vegan crab cakes, jerk veggie steaks, and black eyed pea stew. 943 South Ninth Street, Italian Market

Order: Chick’n Cheezsteak
Vegan-ish is a reminder that eating vegan doesn’t need to feel like a sacrifice. Vegan-ish uses creative cooking techniques to recreate snack foods like chicken tenders, cheese fries, and burgers. There’s something for non-vegans as well: the ish in the name refers to the fact that they also cook seafood, like blackened salmon burritos and shrimp burgers. 1214 North 52nd Street, West Philly

Order: Vegan dim sum
Dim sum is typically pretty heavy on shrimp and pork, so vegans will be delighted by the wide selection of vegetable-based dumplings at Unit Su Vege. Especially notable are the veggie soup dumplings, a treat that is difficult to pull off meat-free. Here, they pull it off with a combination of mushrooms, garlic and veggie broth. 2000 Hamilton Street, Fairmount

Order: Vegan “beef” patties
Nile Cafe specializes in vegan soul food, so expect imitation meat drenched in rich sauces, along with sides like plantains, collard greens, and corn bread. Their veggie “beef” patties tend to sell out, so get there early and don’t hesitate to order extra for leftovers. 6008 Germantown Avenue, Germantown

Order: Pop-tarts
Crust does it all: breakfast sandwiches, special-order cakes, even cinnamon rolls. Find them at a handful of locations across the city, including Grindcore House in West Philly and at their new storefront in Manayunk. 4409 Main Street, Manayunk

Order: Magic mushroom bowl
Dig is the lunch salad chain evolved, with a bigger focus on seasonality and locally sourced produce. Their menu changes regularly, which makes the fact that we always want to go back for more that much more exciting: There’s always something new to sample. 1616 Chestnut Street, Center City 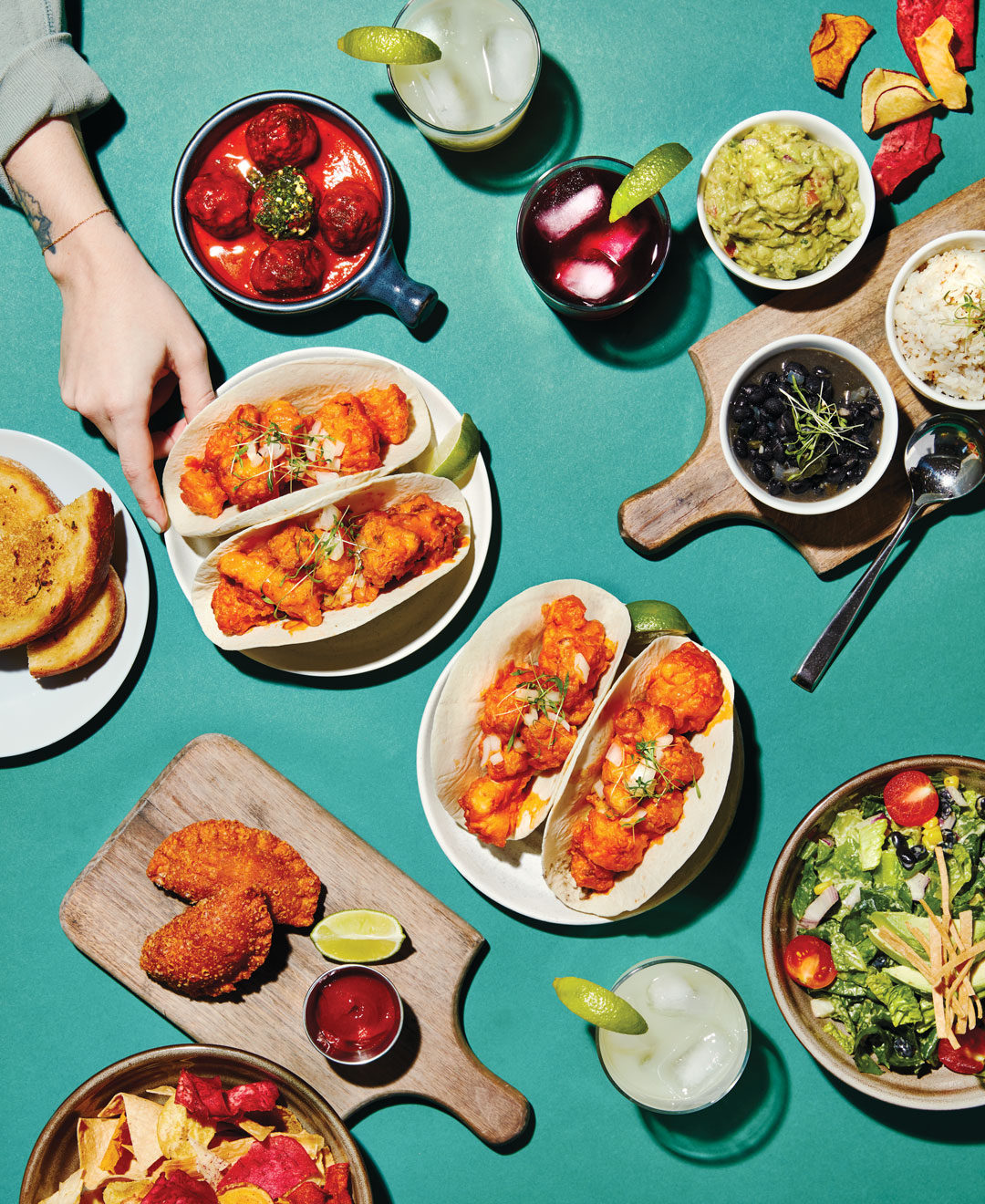 Order: Buffalo cauliflower tacos
Me? I go here for the fried yucca and sweet plantain — two dishes that the kitchens at this Puerto Rican-styled vegan restaurant and bar do really well. But the crowds seem to flock for the Buffalo-style cauliflower tacos, along with mezcal and tequila-heavy cocktails like El Otono, with its cinnamon, lime and spike of allspice. Go figure. 133 South 18th Street, Rittenhouse.

Order: Pickle fried “chick’n” sandwich
Not the kind of place you think of when you’re thinking about vegan food? I know. But check it out: About half the menu is vegan, and on Mondays, Mom’s discounts all vegan food for most of the day. A good thing for fans of the pickle-brined fried “chick’n” sandwich. It’s ugly as hell, but people love it — vegans and meat-eaters alike. 530 South Street, Queen Village.

Order: A bagel sandwich
Vegan sandwiches with tofurkey and veganaise, bagels with tofu cream cheese, a slice of soft, cinnamon-spiked cream cheese coffee cake, and a myriad of non-dairy milk choices (macadamia, oat, etc.) for your coffee — dig into any of these in the cozy back room with the bookcases. It might take you a minute to notice the metal playing quietly over the sound system and the heavily leftist, activist slant of the book selection. 1515 South 4th Street, Pennsport.

Order: Whatever’s being served
Rachel Klein is a caterer who opens up her farmhouse-inspired space for reservation-only family-style vegan dinners full of comforting, approachable foods like Caprese sliders — with cashew mozzarella — and black metal pizza, made with an activated charcoal crust and black ricotta cream sauce. (Seriously — look it up.) And while you’re at it, grab a reservation for the next dinner, because those things sell out fast. 1938 South Chadwick Street, Point Breeze.

Order: The Vegan Jawn
It’s worth hitting Martha just for the profusion of pickles on the menu — from pickled Kirby cukes to pickled beets with jerk spice. But the pro move here is to go for the Pickle Boat (which has a little bit of everything), thereby saving room for the Vegan Jawn, a masterpiece of textures — sliced carrot “coppa” mixed with fermented radish and pickled cabbage and dried eggplant, tucked into a soft, warm hoagie roll from Philly Bread Co. 2113 East York Street, Kensington.

Order: All of the treats
The sandwiches are from Tattooed Mom. The bagels are from Four Worlds. The coffee is Philly Fair Trade. The rest of the menu comes from Vegan Commissary and Go Vegan Philly. But that’s not really what you’re here for. What you’re after are the sweets — the cherry Danishes and cinnamon rolls, the cakes and brownie bars, and the gorgeous cupcakes. 1401 Reed Street, Point Breeze.

Order: The Reuben
I can’t think of any other place to go for vegan scrapple. Or vegan tuna salad. Or a stacked corned beef sandwich that tastes quite like Luhv’s corned beef. But the big draw at both Reading Terminal and the suburban location? It’s always the Reuben — that same corned beef on soft rye with sauerkraut and Thousand Island dressing. 51 North 12th Street, Market East, and 101 North York Road, Hatboro.

Order: The cheesesteak
Chef Carolynn Angle has a lot of really good stuff on her menu, but for her vegan fans, the most important is her vegan cheesesteak — a complicated, sloppy, delicious mess of mushrooms, onions and vegetable protein, glued together with pepper jack cheese and loaded onto a seeded hoagie roll. It’s the best vegan cheesesteak in a city that’s full of them. 224 South 15th Street, Center City. 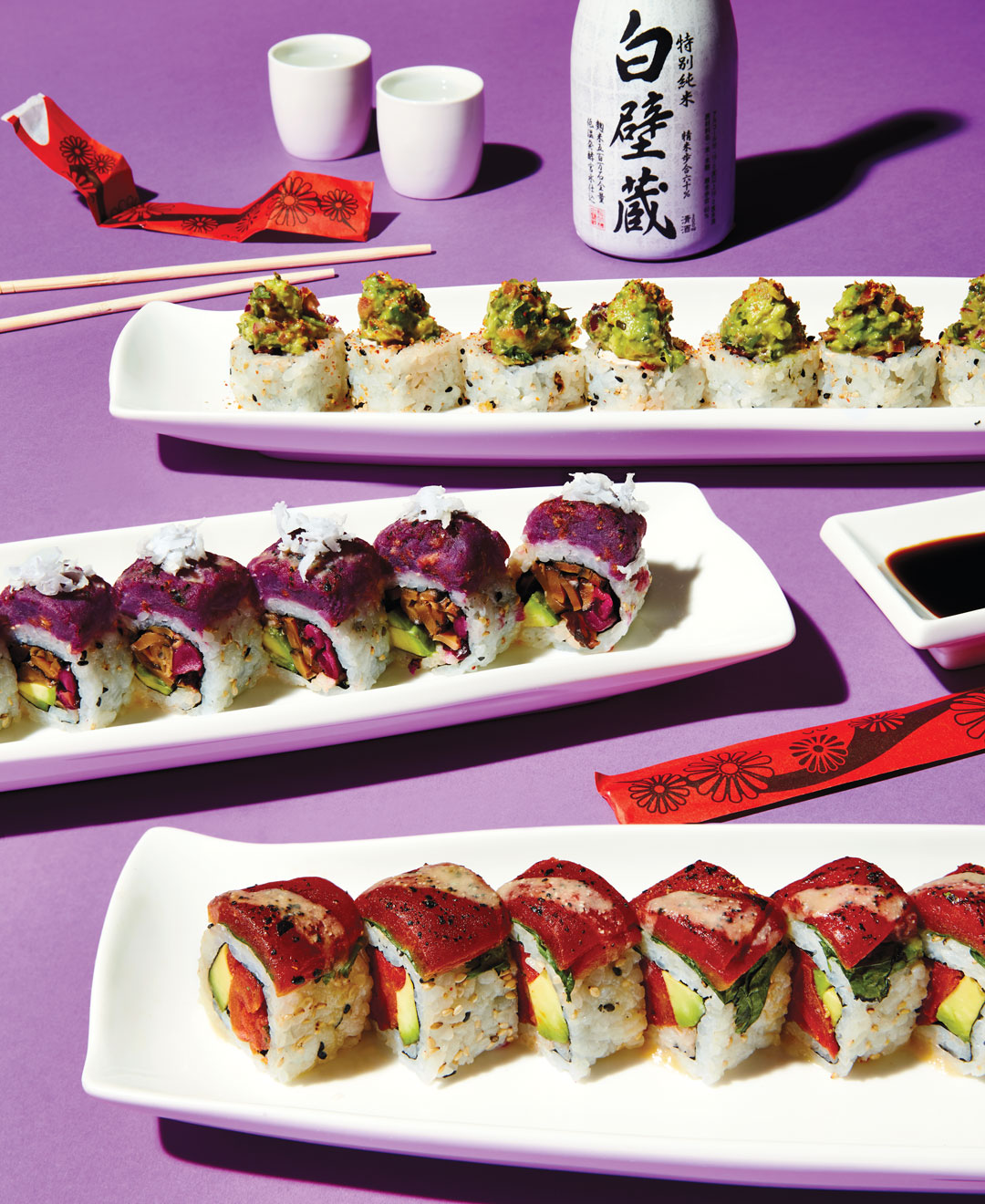 Order: The Straw-Veggie sushi roll
Subtract the fish, and you’ve got vegan sushi. But chef Andy Kho isn’t just removing the fish — he’s adding layers of flavor and texture with new approaches to veggies, fruits and meat alternatives. From the simplest avocado and oshinko maki to more complex creations like the Straw-Veggie (with oshinko, seasoned kanpyo gourd, shibazuke pickles and avocado, topped with sliced strawberry), this is the place to go for actual vegan sushi. 228 Arch Street, Old City.

Order: Seasonal pasta
At lunch, scrambled tofu soft tacos and red chili-glazed cauliflower banh mi. At dinner, grilled za’atar-spiced oyster mushrooms over potato pavé and grilled corn and blueberry salad. Sprig & Vine mixes styles in a way that allows for Japanese turnip curry and beet and ricotta ravioli to share space on the menu without it being, you know … weird. Mostly because all of it is so good. 450 Union Square Drive, New Hope.

Order: Fried chick’n and waffles
These days, there’s a vegan version of almost everything. But it’s still impressive when a kitchen pulls off something like this vegan fried chicken and waffles. I mean, it has the same crunch as the real thing, the same mix of savory and sweet — topped with blueberry maple syrup and candied jalapeños for a little spike of sweet heat. Even on a menu containing plenty of vegan options, this one is a standout. 705 North 2nd Street, Northern Liberties.

Published as “The 20 Best Places for Vegans to Eat in Philly” in the December 2019 issue of Philadelphia magazine.