Where to Sit at the Bar and Be Social

Philly spots with busy bars, nice people, and no awkwardness about sitting alone. Go forth and make a friend. 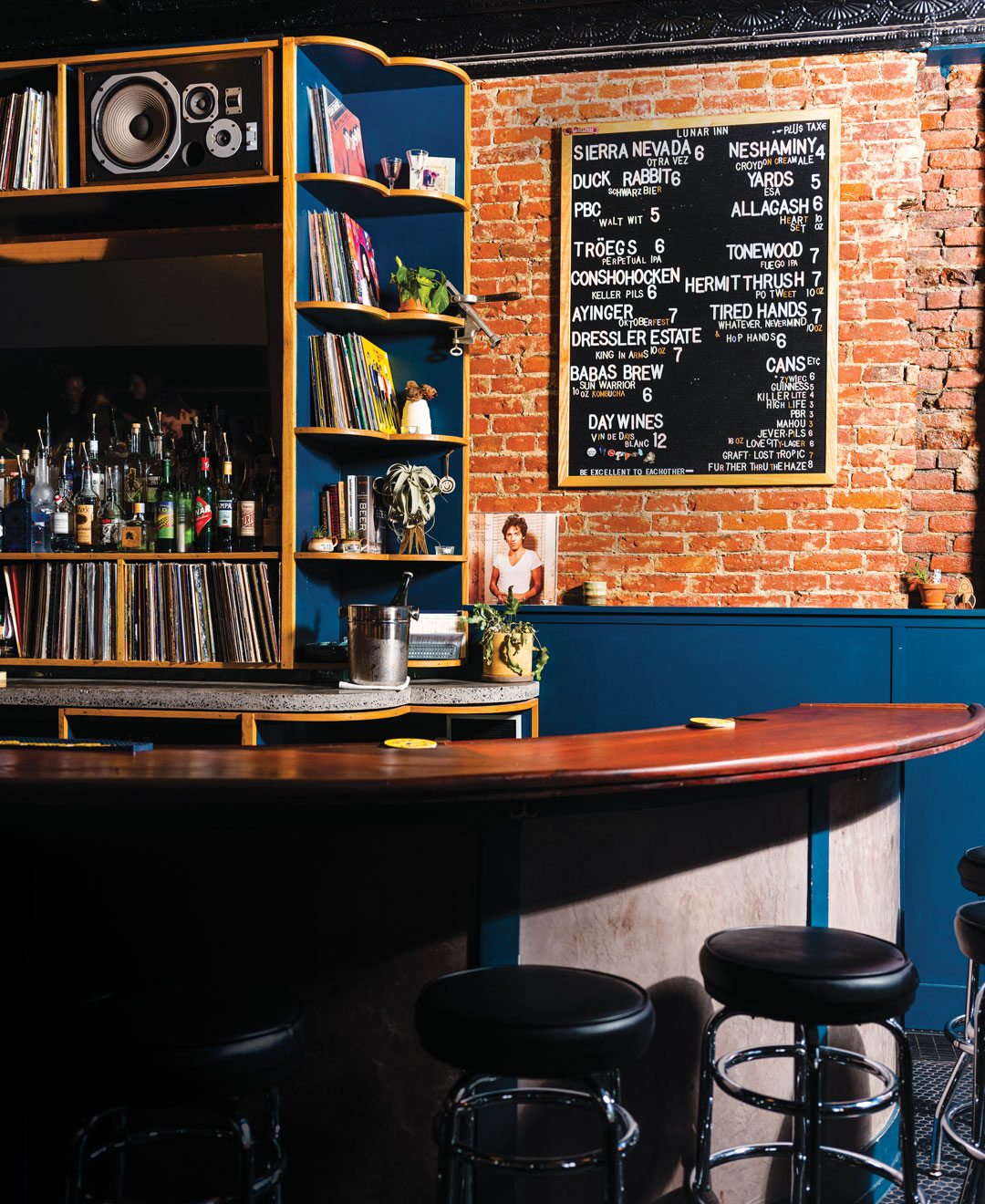 The Lunar Inn in Port Richmond / Photograph by Ted Nghiem

Small talk gets a bad reputation, but sometimes it’s the end of a long day, and all you want is to get out of your house, turn off your screen and gab with a stranger who doesn’t know your neuroses. Head to one of these bars (or restaurants with great bar areas) for an evening where you might just strike up a conversation with someone who seems nice enough to spend 30 minutes with. You won’t feel awkward sitting alone, the patrons are usually down to hang, and the bars are busy — but not overwhelmingly so. Go forth and make a friend.

Fountain Porter, East Passyunk
I go to Fountain Porter a lot, so I can tell you that there is almost always at least one person sitting at the bar solo. There’s also one TV, which means you can follow along with whatever sport might be playing if there’s a lull in conversation, and the bartenders are friendly — not in an overbearing, fake way, but in a more laid-back genuine way. Get the $6 burger while you’re at it. 601 South 10th Street.

Good King Tavern, Bella Vista
You could sit at the bar and talk about obscure French cocktail ingredients with the bartenders at Good King Tavern while you snack on a charcuterie board, or you could head upstairs to Le Caveau, the wine bar where you’ll forget what day it is as you drink French wine and eat a hot dog in a baguette. Either of those would be a good idea, and either of them will almost certainly lead to lovely conversation with your neighbors. 614 South 7th Street.

The Lunar Inn, Port Richmond
There are not a whole lot of places in Port Richmond to drink natural wine and interesting cocktails, which means that the people who live near there and want that experience tend to frequent the Lunar Inn. The place fills a lot of niches: It’s a wine shop, restaurant and bar, and the people who hang there are generally regulars. Ask one of the knowledgeable bartenders what kinds of seasonal margaritas they’re pouring, have a fried-chicken sandwich, and get to know the other folks sitting at the bar. 3124 Richmond Street.

Monk’s, Center City
Monk’s is the city’s original craft beer bar, which means there are Philadelphians who have been holding court here for decades and would be delighted to regale you with stories of the past. This Belgian beer palace also has an enormous selection, so no one will think twice if you ask your neighbor what they’re sipping. The food is also nice, with the mussels a particular stand-out. 264 South 16th Street.

Local 44, University City
Away from the crush of college students, Local 44 is a true neighborhood watering hole. Sit at the bar, ask the bartender what they’ve got on draft, and crush a burger — you’ll feel like a regular in no time. 4333 Spruce Street.

Human Robot Brewery, Old Kensington
For great bar-side chatter, you need something to talk about. And there’s always something to talk about at Human Robot. The beers are kind of weird, but in a good way. Ask them about the Milktube, a 10-ounce pour of foam (just try it) that’s the brewery’s variation on a traditional Czech pour. It’s sure to get the conversation going, whether you like it or not (and it’s only $3, so if you hate it, that’s just more to talk about.) 1710 North 5th Street.

Southwark, Queen Village
If you think of Southwark as being a bit too fancy to go by yourself, you’re incorrect. The bar is indeed softly lit and elegant, but it’s also one of the only spots in the neighborhood to get a great, classic cocktail cocktail (or a beer, or a glass of wine, a nice pour of bourbon or … you see our point), so there are always a few solo sippers bellied up to the bar. Mondays are particularly good for hanging, when sommelier Jamie Rubin takes over the bar and pours wines from the restaurant’s cellar. Jamie himself is lovely to chat with, as are the regulars who flock to his bar for some unpretentious wine talk. 701 South 4th Street.

Dirty Franks, Center City
Earlier in the evening, before this place gets taken over by large groups of twenty-somethings, Dirty Franks is a favorite of locals who have been going for decades. It’s cash-only, so bring a few bills and spend a few hours sipping on Tecate and frosé, and nibbling on bags of chips. 347 South 13th Street.

Royal Izakaya, Queen Village
A friend of mine recently told me that she, for the first time in her life, picked up a man at the bar at Royal Izakaya, which is why it must be on this list. The tale makes sense — Izakaya doesn’t take reservations, so the bar is a great place to slip into a solo seat in a big wooden chair (with a back), sip on a highball or some sake, and chat with the people on either side of you. When you get hungry, order some mentaiko fries and ume-shiso spareribs. 780 South 2nd Street.

Messina Social Club, East Passyunk
Messina is, as the name suggests, a social club — the bar is generally busy with folks who feel like regulars, and you can order a la carte food (or some very good dessert). Plus, because it’s a social club with different rules than regular bars, the place stays open until 3 a.m. If you’re not a member, join via email and then head over. 1533 South 10th Street.

American Sardine Bar, Point Breeze
American Sardine Bar has a very long bar, so there’s always at least one seat where you can squeeze in, order a local beer and some snacks, and chat with the person next to you about the Eagles, or the Phillies, or whatever team people might be talking about at that moment. 1800 Federal Street.