What does the Mayor of Flavortown’s arrival in Philly mean for our restaurant scene? 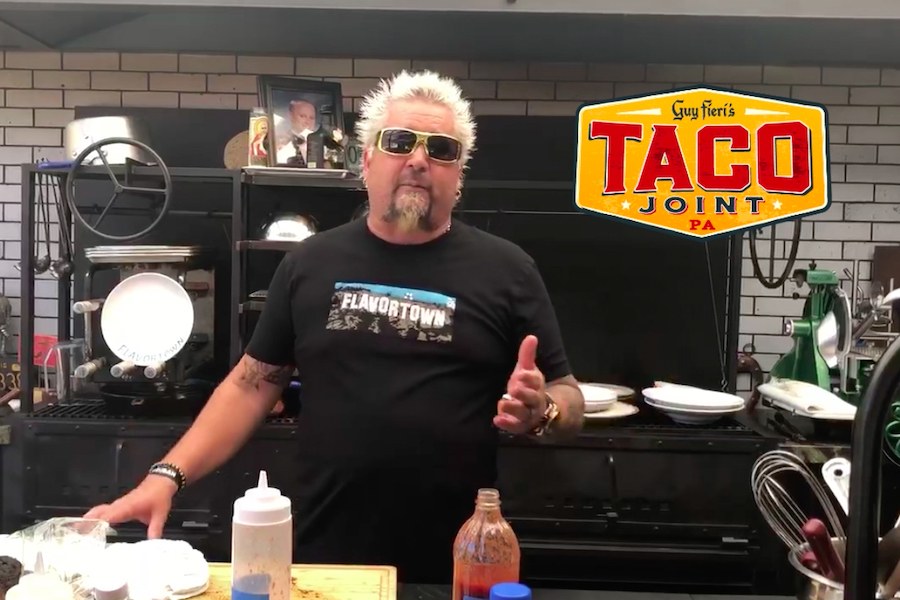 Guy Fieri opening a restaurant in Philly was always an inescapable reality, I’m afraid. Dude’s too prolific a restaurateur, opening over 60 restaurants in casinos and amusement parks and cruise ships and stadiums across the globe. He’s been orbiting this town for years, popping in and out to shoot some Food Network T.V. shows (most recently a Diners, Drive-Ins and Dives episode that featured Hardena in Point Breeze, Stogie Joe’s in East Passyunk, and Gaul & Co. Malt House in Port Richmond), opening two restaurants in Bally’s Casino in Atlantic City and a third at Harrah’s Casino in Chester. It was only a matter of time before he entered the city limits (with its growing number of casinos) to open a restaurant.

But Guy Fieri opening two restaurants in Philly — Guy Fieri’s Taco Joint and Guy Fieri’s Burger Joint, both inside the new Live! Casino & Hotel opening near the stadiums in South Philly sometime next year — is a specific kind of hell only 2020 knows.

In September, the Live! casino operators announced that three local food institutions, Lorenzo and Sons Pizza, Sang Kee and Termini Bros. Bakery, would be opening outposts inside the casino’s food court. Lorenzo’s, the release said, would be bringing their famous jumbo slices to the casino-hotel, with the addition of “new and exciting personal gourmet pizzas.” Sang Kee (of Peking Duck House fame) would open a noodle shop. Termini would be handling the cannolis, cakes and cookies. That was a smart, and honestly, much appreciated nod to our local flavors.

And then came yesterday’s news about Guy Fieri’s restaurants:

(“Donkey sauce,” as we’re all well aware at this point, is just aioli, made famous by Fieri and a viral restaurant review of Guy’s American Kitchen & Bar in Times Square.)

That there are Guy Fieri–branded restaurants opening in the same city, in the same pandemic that’s forcing so many independently owned restaurants to close isn’t lost on me. But I also acknowledge that the mere act of laying into the Mayor of Flavortown’s hair spikes and bowling shirts is just as hackneyed as some of his T.V. shows and restaurant concepts. If we take into consideration what he’s done for small, family-owned restaurants across the country (plus, the fact that he’s turned out to be the last “unproblematic” food personality left in America), Guy Fieri and his “Trash Can Nachos” covered in “S.M.C.” arriving in Philly isn’t, like, the worst thing in the world.

Like the Panda Express that opened a block from Philly’s Chinatown, Fieri’s restaurants are isolated from the outside world, insulated by big-money development. They’re trapped between the walls of a South Philly casino, not encroaching on our turf. They’re not eating up any valuable real estate, they’re not driving up the prices of rent, they’re not killing our cool. There’s a lot of speculation about the end of restaurants, about chain restaurants dominating the future of American dining — but there’s no bigger takeaway here. No story, really.

Fact is, as we trudge deeper and deeper into this 2020 hellscape, this circle of hell is, by far, the most harmless. Guy Fieri opening two restaurants in Philly isn’t a sign of the times, nor is it a sign of things to come. If anything, it’s proof that the world’s still spinning — and that nothing on this planet can stop Guy Fieri from Guy Fieri-ing, even here in Philly. Even in times like these.