Donkey Sauce Is Just Aioli, and Other Things I Learned at Guy Fieri’s Philly Restaurant

Turns out, Flavortown has an actual street address. 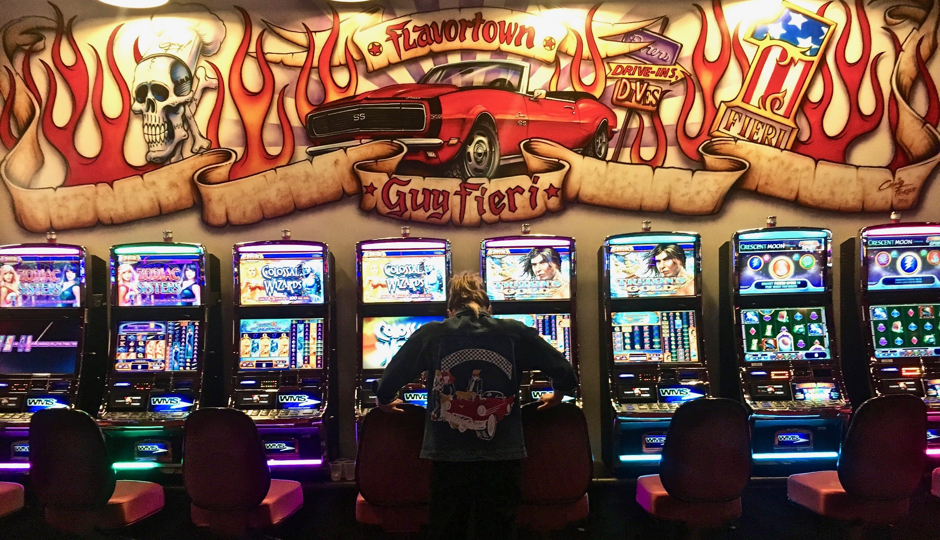 Sometimes, celebrity chefs stab kettle cooked potato chips into half of a frozen, store-bought chocolate marbled cheesecake and call it art. Other times, they add six cheeses to macaroni.

Last Friday, among other things, I learned that six cheeses is far too many cheeses for macaroni.

Me and three of my friends willingly chose to take the 28-minute drive to Flavortown, or Guy Fieri’s Philly Kitchen + Bar at Harrah’s Casino in Chester, and as we drove through the big, bright lights of the casino into the parking garage, we felt something: Excitement. It’s been years that we’ve followed Guy from afar, took his advice on diners, drive-ins and dives in Nashville, Portland and beyond. But now, we’re getting a taste of the celebrity chef’s signature restaurant right here in Philadelphia (well, Chester, but who’s looking at maps?), in a flashy casino that essentially shares a parking lot with a prison. He even added a Philly soft pretzel burger bun and two different kinds of cheesesteaks to the menu.

As we sidled up to the deep red leather upholstered booth that rose a little above the rest of the restaurant, we could look down at our fellow patrons, who were all much older than our 20-30-year-old selves, and each had some variation of an eccentric, double stuffed cheeseburger sitting on their table. From here we could see Guy Fieri’s vision for his chain restaurant: a place between a bookie bar and your grandfather’s cigar room, with Mexican sugar skull napkins and forks with handles that looked like they belonged on a Harley Davidson.

Unlike the mix of eclectic decor and dinnerware, the menu was comprised of your standard fare. You had your pick between standard appetizers (wings, cheese fries, and sliders) and second course “big bite” burgers, salads “knuckle” sandwiches, and “big eats.” Everything was draped in at least one kind of cheese, and most things came with Guy’s signature “Donkey Sauce,” which is, explicitly, just garlic aioli.

We ordered some of our server’s top picks. First, double-barrel BBQ wings, which were meaty and flavorful, as expected. Then, literally trashcan nachos, which were delivered in a giant silver can that was slowly upheaved table-side, with “SMC” (Super Melty Cheese), crema and tender smoked brisket covering each tortilla chip. 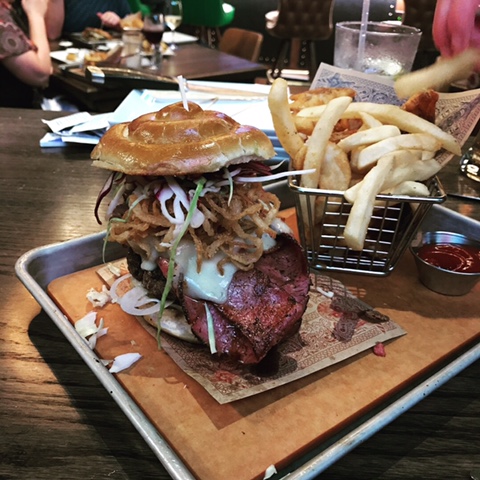 The Mayor of Flavortown

We, naturally, ordered “The Mayor of Flavortown,” and were handed a our foot-tall charred patty piled high with pastrami, coleslaw and melted swiss cheese on a buttered pretzel bun.  And for dessert, we took the “Cheesecake Challenge,” which was half of what looked like a Sara Lee cheesecake flipped on its side to form a crescent moon and decorated with chocolate-covered mini pretzels and kettle cooked chips. It succeeded in putting all of us over the edge and was reminiscent of the strange sweet concoctions I whipped up when I was stoned in high school.

After our meal, I made my friends text me five-word descriptions of their experience. They included:

“My body is a burger bar.” (Okay, that’s technically six. Whatever.)

…and others I will not repeat. The truth is, we came in with the same expectations one would have after watching the restaurateur force three young chefs to cook with sour gummy worms on his show, Guy’s Grocery Games, the week prior. You can’t be truly disappointed; we fully understood what we were getting ourselves into. In fact, we welcomed it. Because Guy Fieri has made a career out of being the gutter punk of fine and unhealthy food, jousting together gluttonous ingredients to make recipes that sometimes sound like they were trash picked, and sometimes come in a trash can. He’s like Ratatouille in that way, the mayor of Flavortown — and when you take away the glitz and glam of the T.V. screen, his food seems more down-to-earth. You know, like Donkey Sauce.

And that’s why we love him. He’s just a regular Guy.