And the suit claims that President Trump is on the restaurant's side. 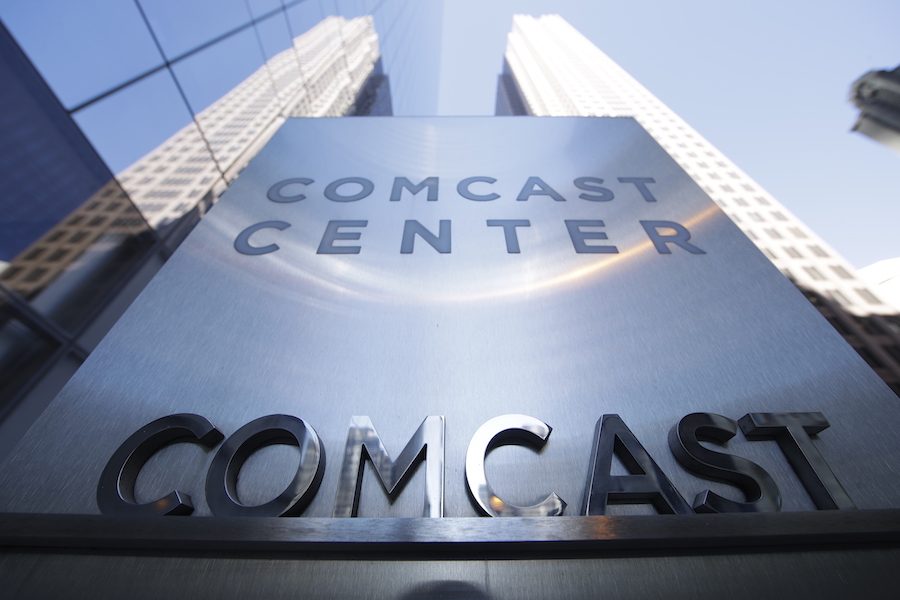 A sign at Philadelphia’s Comcast Center, which is home to the steakhouse Chops. The restaurant is suing its insurance company over coronavirus losses. (AP Photo)

You may remember Chops best for a headline-making lawsuit that the restaurant filed against Inquirer food critic Craig LaBan back when Chops was on City Avenue in Bala Cynwyd. The owner of Chops sued LaBan for libel over a review that LaBan wrote of the restaurant or, more specifically, one of the restaurant’s steaks. (It’s a long and convoluted story that made it all the way to the New York Times. You can read all about that Chops lawsuit, which eventually settled, here.)

But that was way back in 2007. This is 2020. And Chops, which moved from Bala Cynwyd to the Comcast Center in 2014, has, like so many Philadelphia restaurants, been forced to closed due to the coronavirus. So Chops is suing its insurance company in an attempt to get the company to cover the restaurant’s losses. (A similar lawsuit was filed by South Philly BYOB River Twice recently. And major restaurant groups around the country are following, er, suit after their insurance companies have indicated that they are not covered.)

Chops filed its lawsuit against Admiral Indemnity Company — the same insurance company that River Twice is suing — in Philadelphia’s federal court on Friday.

In the lawsuit, Chops maintains that the restaurant’s policy is of the all-risk type, meaning that the policy should cover any direct physical loss or damage “unless the loss is specifically excluded or limited in the policy,” and the lawsuit claims that there are no such exclusions that relate to the current situation.

The lawsuit also states that the policy includes supplementary insurance that specifically covers losses that result from orders from a “civil authority.”

The Chops suit points to Pennsylvania Governor Tom Wolf and Philadelphia Mayor Jim Kenney as those civil authorities who have invoked such orders, referring to their directives to close all non-essential businesses. Restaurants are allowed to do takeout and delivery business, but Chops is the type of place that sells $61 steaks (sauce extra!) and a $9 baked potato. It’s very much a white-tablecloth dine-in affair.

The Chops lawsuit looks to President Trump’s words in support of the restaurant’s position. On April 10th, Trump spoke with reporters about the economy during the coronavirus crisis. And he addressed the issue of insurance companies covering restaurants for losses during this time.

“If I had [the insurance], I’d expect to be paid,” Trump said. “You have people — I speak mostly to the restaurateurs — where they have a restaurant, they’ve been paying [the insurance premiums] for 25, 30, 35 years… They’ve never needed it. All of a sudden, they need it… And they don’t want to pay up. I would like to see the insurance companies pay if they need to pay, if it’s fair. And I know what’s fair… When they finally need it, the insurance company says ‘we’re not going to give it.’ We can’t let that happen.”

Chops can seat up to 190 people inside the restaurant and up to 60 outside. The restaurant has been closed since March 16th. The lawsuit doesn’t specify the exact amount of losses, since they are ongoing, but states that the losses exceed $150,000.

Here is a message that appears on on Admiral’s website:

Admiral is committed to doing the right thing for our policyholders during this tough time. We are in constant and continuous communication with our appointed brokers to help them work with you. As a specialty insurer, we are unable to discuss your policy directly with you, but we assure you that our wholesale brokers are fully equipped to assist your agent with your needs. We encourage you to contact your agent about any questions or concerns you may have and we will continue to ensure they have everything they need to take care of you – our valuable policyholder.

An Admiral representative was not immediately available for comment.