Poor Gritty Only Got One Vote for President in Philly

And Kayne West got 2,287.5 percent more votes than Elizabeth Warren. (Ouch!)  These and other sad, surprising, and sometimes downright silly observations from Philly's write-in votes in the 2020 presidential election. 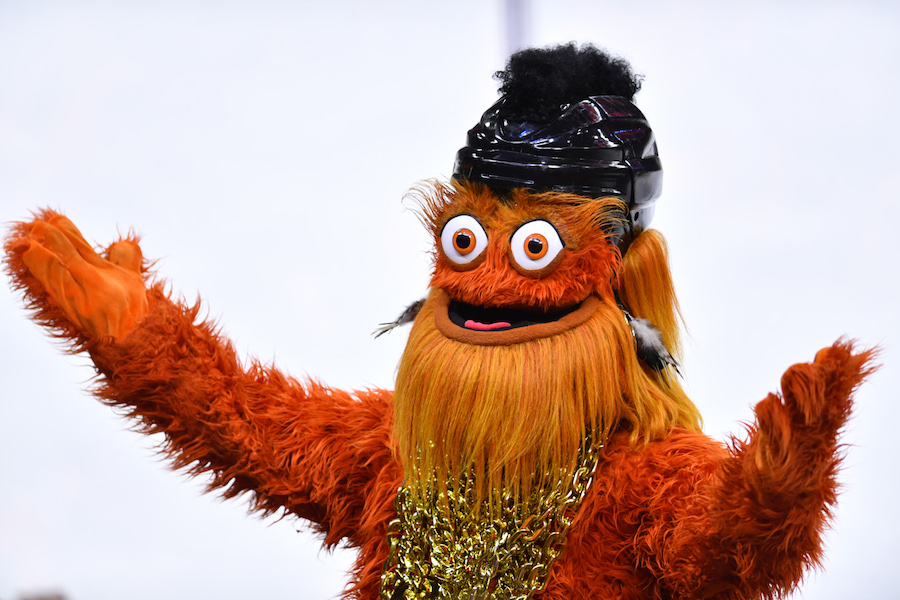 Gritty outstretches his arms as if to say, “C’mon, Philly, I only got one write-in vote? Where were all my people?” (Photo by Getty Images)

Out of the hundreds of thousands of ballots cast in the city’s election, Philadelphia’s favorite mascot, Gritty, got only one write-in vote for president of the United States of America. For comparison, Gritty received 57 write-in votes in the 2019 race that reelected Mayor Jim Kenney.

Don’t feel too bad for Gritty. He got 400 percent more votes (granted, he only got five votes total, but that’s still technically 400 percent more than one, which at least sounds impressive) in the race for attorney general of Pennsylvania, besting Mickey Mouse by two write-in votes, Jesus Christ by three and Borat by four.

In the race for state treasurer of Pennsylvania, Gritty and Donald Duck, with three write-in votes each, both beat Jesus Christ and Mickey Mouse (two votes apiece). Bringing up the rear with one write-in vote each: Babe Ruth, Bob Hope, and Pearl Jam lead singer Eddie Vedder.

By pure vote quantity, Gritty performed best in the race for the 1st District of Pennsylvania state Senate seat. Gritty got a whopping 20 write-in votes there, tying Mickey Mouse. Eagles quarterback Carson Wentz received seven votes in that district, while deceased former mayor Frank Rizzo came up with five write-in votes, his best turnout across all the races. You may not be surprised to know that the 1st District includes the entirety of South Philadelphia, land of Frank Rizzo and Gritty.

But enough about Gritty!

Of the 2,067 write-in votes cast for president of the United States in the Philadelphia election, the clear, er, winner was Howie Hawkins. Hawkins, the Green Party candidate, wasn’t on the ballot because of a court challenge prior to the election. He scored 381 votes, more than 18 percent of all write-in votes cast in the race.

That was just a handful of votes shy of doubling the tally of Bernie Sanders, who managed to scramble together 198 votes. Kanye West received 191 write-in votes in Philadelphia, a margin close enough to Bernie that Kanye might consider asking for a recount. (That’s a joke, Kanye! Please don’t. No, really.)

Elizabeth Warren, on the other hand, only received eight write-in votes. Granted, that’s seven more than a fake ugly orange creature created by a lousy hockey team’s PR geniuses. But think about it this way: Kayne West got 2,287.5 percent more write-in votes than Elizabeth Warren in the Philadelphia election. What a world.

As for some of the other serious former candidates for president, Andrew Yang, Tulsi Gabbard, Michael Bloomberg, John Kasich and Nikki Haley all took home more write in-votes for president in the Philadelphia election than did Warren. But she can at least boast of just beating Jesse Ventura, Dwayne “The Rock” Johnson, Joe Rogan and Alice Cooper.

Below, taken from Philadelphia’s official election results, is a tally of all of the write-in votes for the office of president of the United States. To help you decipher this list, a few explanations. “VOID” means that the voter wrote something that was deemed illegible by the vote counters. This would include simply writing down a profanity or a protest word or phrase. So hypothetically speaking, “FUCK” gets jettisoned, as does “DUMP TRUMP.” “BLANK” indicates that the voter asked to enter a write-in candidate but then didn’t actually write anything in the space provided.