How Gritty (and His Entourage) Made it Okay to Laugh Again

2020 has sucked, but at least we still have the big orange furball. 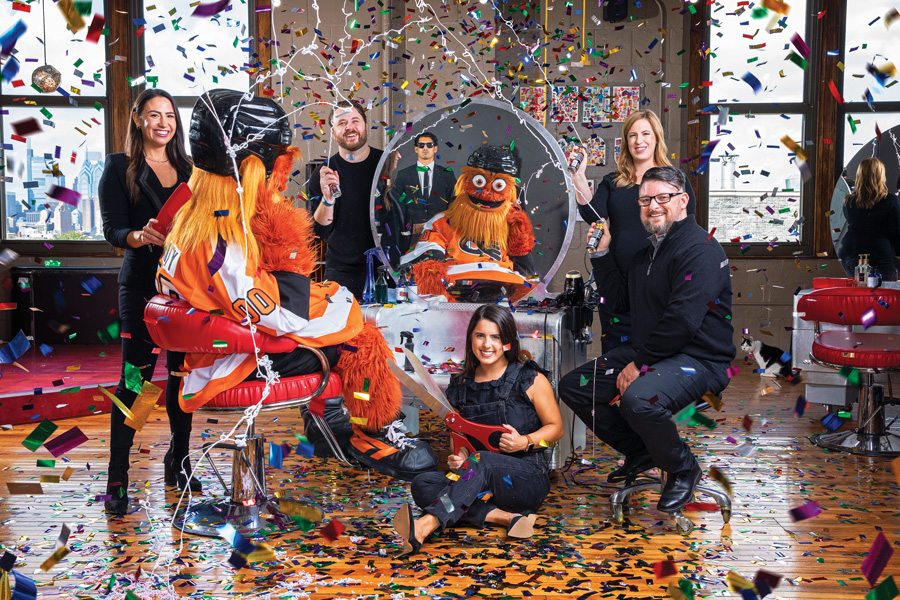 When the pandemic put the NHL on pause in March, Gritty, officially the mascot of the Flyers, was put on pause as well. But because Gritty is unofficially the mascot of the entire city, Gritty wasn’t about to stay paused. It started, naturally, with a tweet — “I rightfully assume my duty to be the orange light of hope in this COVID-19-covered world.”

“It was a pledge to maintain his stance as someone who brings good into the world,” says Lauren Capone, manager of marketing communications for the Flyers and Gritty’s writing collaborator.

It continued with a “talk” show, Gritty’s ¼ Hour of Power, in which the fuzzy one, using props and cue cards, got Flyers and other celebs to engage in ridiculous virtual parlor games. The show was shot daily in Gritty’s apartment, which, replete with succulents, tasteful pendant lamps and a cat tower, revealed the mascot’s … human side.

“In 2020, everyone gets to see everyone’s homes,” says Christine Mina, senior manager of digital media and ¼ Hour’s executive producer. Team Gritty had to decide: “How much are we going to peel back the curtain? To Gritty’s credit, he disassembled his dining room every single day to film this content for everybody.”

Eventually, Gritty got back into the community: socially distanced hospital visits to salute front-liners, a fire-truck parade in Delco, a traveling pep rally in Wildwood, a Community Caravan. “People couldn’t stop thanking us,” recalls Capone. “It was overwhelming.”

Of course, Gritty took it all in stride.

“The whole idea behind Gritty has been to encourage people to laugh. Obviously, there’s so much going on in the world, so we needed a way to bring that into this new world,” says a source very close to Gritty. “This group has always been adapting on the fly, and COVID hasn’t stopped us.”

But challenges remain, particularly in a world desperate for contact, plushy or otherwise. “Social distancing was tough, is still tough, because everyone’s reaction to a big fluffy mascot is to go up and hug them,” says our source extremely close to Gritty. “Everyone wants to hug someone, and of course you want to hug a mascot. We’re still dealing with that issue.”

Published as “Team Gritty” in “The 76 Most Influential People in Philadelphia” list the November 2020 issue of Philadelphia magazine.