This has been a very abnormal election. So take a moment to watch some ballot-counting, and embrace the mundane. 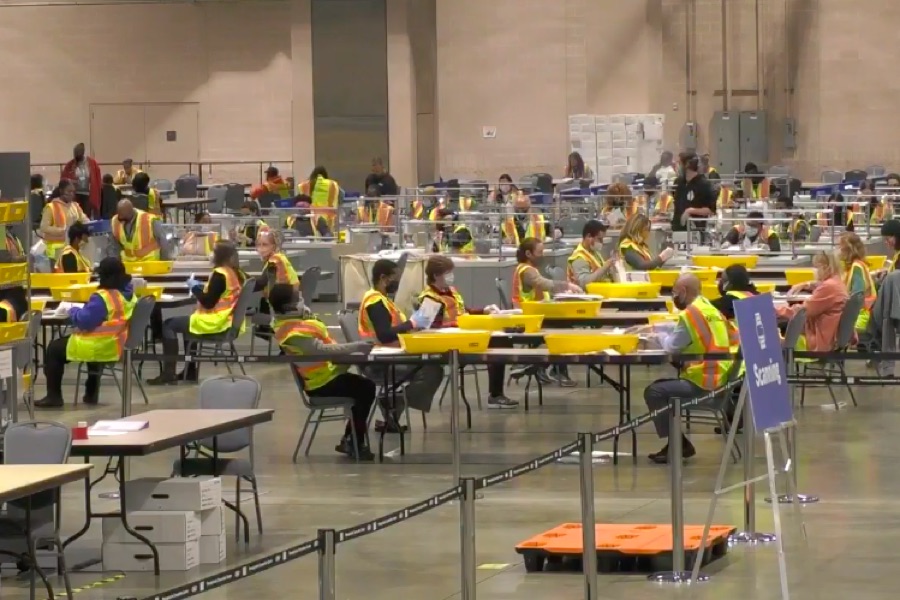 A view inside the Pennsylvania Convention Center, where a ballot-counting stream depicts democracy happening in real time. Screenshot via YouTube.

This whole democracy thing, it’s messy. Often needlessly so. Partisan bureaucrats have tried to slow down the mail so ballots will end up uncounted. Donald Trump’s entire campaign strategy at this point seems to be to disqualify as many mail-in ballots as possible and sue his way into a second term. Meanwhile, just a few hours ago, a federal court ordered a number of postal districts — including some in Pennsylvania — to scour their premises in an attempt to find 300,000 ballots that the postal service received but may not have actually delivered.* See? Messy.

So it’s been nice to catch a glimpse of a different part of the democratic process, one that isn’t nearly as much like the slow-motion train derailment that has been the rest of this election season. I’m talking about the livestream of the Pennsylvania Convention Center set up by the Philly City Commissioners, which allows you to watch the entire ballot-tallying process from beginning (7 a.m. this morning) to end (time TBD). It is, for my money, the single best election distraction out there.

It may seem weird to distract yourself from an election by watching … the election. But if the usual trappings of our way-too-long 18-month campaign season are feats of theatrics and peacocking, the actual counting of the ballots is delightfully mundane. In one of the livestream shots, we see a group of workers — tens of them, each wearing a fluorescent vest with orange stripes like a traffic guard — preparing ballots to be scanned. They remove the folded ballots from yellow plastic boxes, flatten them out, then place them in new stacks next to the yellow boxes. Then they do it again. And again. Presumably a few hundred thousand times over.

The monotony is what makes it so compelling. I still have no idea how to conceptualize the transport and counting of even just 100,000 ballots in my head, but watching this process unfurl at its meticulous yet speedy pace provides a kind of reassurance: This is how it’s supposed to work. Nothing else has been normal this election, and there’s a real danger that even if Biden wins, we’re in deep trouble as a country. But those are thoughts for when the results start coming in. Until then, watch some of the livestream. You won’t be alone — at one point today, more than 1,500 other people were doing the same.

*Update 11/4: Vice has written that the 300,000 ballot total was a gross overestimation; on Wednesday, the publication reported that the postal service completed its ballot sweep, finding just 13 undelivered ballots.