To celebrate, here’s a look back at the highlights from year one of the Reign of Gritty. 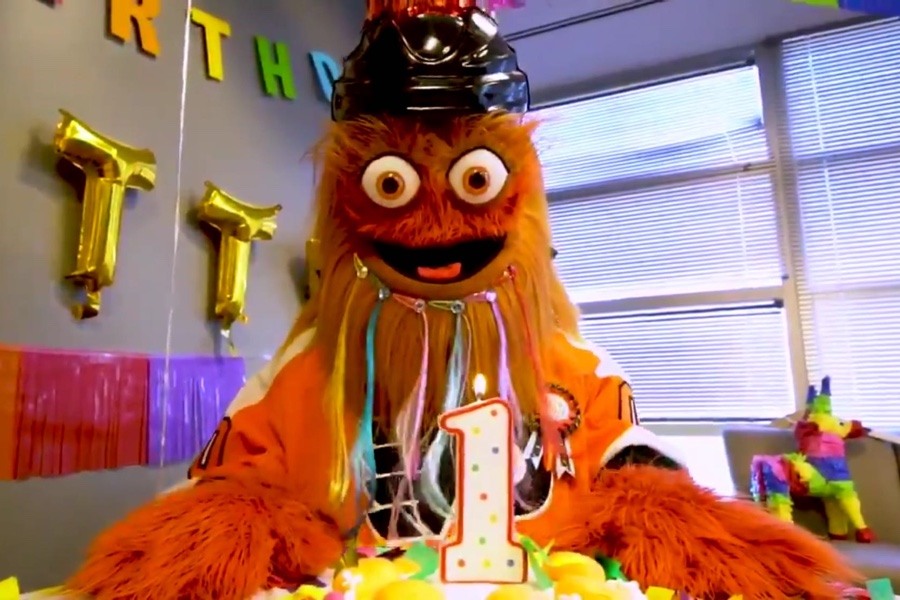 When the Flyers unveiled their new mascot Gritty on September 24, 2018, the reaction was one of shock, disbelief, dread. Looking at it — this ghoulish, googly-eyed thing — felt akin to seeing some nightmarish monster straight out of one of Dante’s levels of hell.

The number of initial mocking, snarky tweets could fill an encyclopedia. Most of Reddit thought Gritty was on drugs. One person started a Change.org petition calling for Gritty’s ouster, writing, “The new Philadelphia Flyers mascot is terrible and in no way represents the team, or the great city of Philadelphia.” (The petition failed.)

The media was no less kind. Billy Penn expressed hearty skepticism: “Look, we get that the Flyers are trying to create their own Phanatic. But it’s unfortunate that no one stopped to ask if one donut-waisted shaggy carpet monster was enough for this town.” Even we were incredulous, describing Gritty in our first-ever story about the mascot as “the stuff of nightmares — and not the only mascot mistake Philly has made recently.”

But oh, how we were all misguided. How we were blinded, at first, staring into the rays of your bright orange visage. Thinking that you were tacky, scary, overly hairy. But now we realize the error of our ways.

See, we love you, Gritty. And for your first birthday, we’d like to list all the reasons why:

We love you for the time you streaked, in the nude, across the Linc.

And for the time you, fully clothed, got to meet Jimmy Fallon.

We love you for inspiring a veritable cottage industry of Gritty-themed food and drink.

We love you for inspiring a three-foot-tall, $800 bobblehead. (Though we’re left to wonder if this expression of pure capitalism might have unsettled you, considering you were adopted as a leftist political mascot.)

We love you for having one of the best damn Twitter accounts out there.

We love you for the journey you’ve made — from the humble beginnings of the Please Touch Museum, to the cover of Artforum.

And speaking of magazines, we love you for the time you dressed up for this magazine as seven of the most famous Philadelphians of all time.

But most of all, we love you for making us understand who we really are. Now when we look at Gritty, we don’t see a monster. We see ourselves.