Yes, Gritty Actually Went Streaking at the Linc Over the Weekend

And it has come to our attention that our favorite mascot has a bright blue belly button. 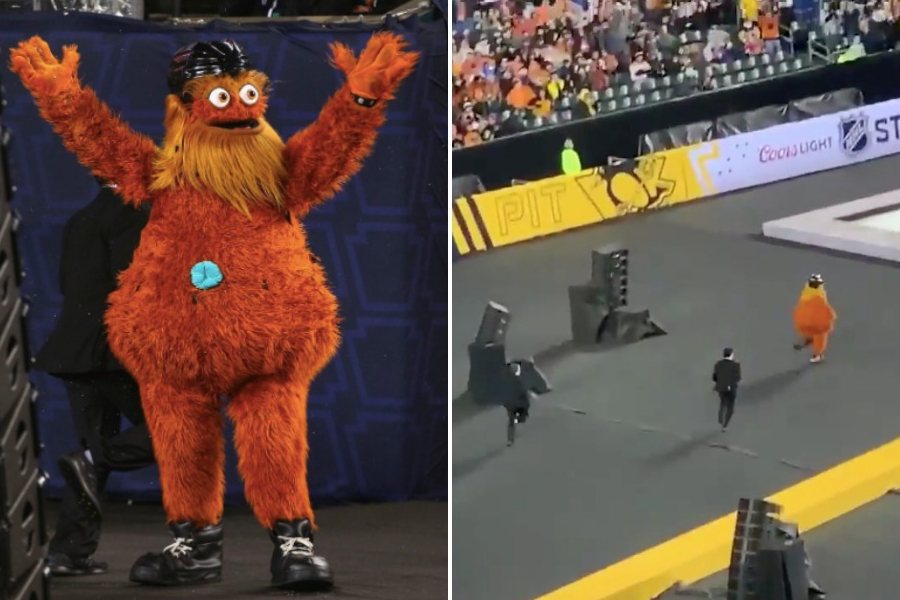 Gritty streaking at the Linc. | Photos via the Philadelphia Flyers

Just when you thought Gritty couldn’t get any … grittier.

This past weekend, our favorite mascot somehow outperformed his infamous wrecking ball entrance way back in October at the Flyers’ first regular season home game. Those who recall the event will likely attest to its being the moment Philadelphia fell truly, inescapably in love with the orange beast. But this past weekend, he topped that memory.

On Saturday night at the Linc, Gritty made a legendary appearance during the Stadium Series game against the Pittsburgh Penguins (which we won, by the way). His show was a little too good, in fact — audience members and stadium staff couldn’t handle it. Our mascot got ejected.

Why? Let’s return to the beginning of the evening, which started rather innocently. Before the game began, fans at the Linc beamed as they gazed up at the rafters at our Gritty, clad in a stunning neon suit. Soon, he leapt from the ceiling and swung through the air over the rink and bleachers, dangling — more elegantly than Spiderman, some might say — from a rope apparatus.

Yes, Gritty Actually Went Streaking at the Linc Over the Weekend

It was beautiful. And simple. And pure.

And then he went streaking.

I’ve since been ejected. pic.twitter.com/6ims2CQpsc

When you think about it, really, it was only a matter of time. An activity like streaking feels so Gritty that we’re not really shocked it happened. Instead, we’re just surprised it didn’t happen sooner. But in case you’re wondering, he tweeted that the act of defiance was “worth it.”

Oh, and another thing: Yes, that is really Gritty’s jersey-less body, which, according to the Flyers, is the “ideal Grit body.”

This is the ideal Grit body. You may not like it, but this is what peak performance looks like. #StadiumSeries pic.twitter.com/Lkn4JEQvvI

It’s definitely what some people might call “pear-shaped.” And we’d like to think of Gritty as a fuzzy, orange pear. But either way, we’re not surprised to see that he’s in “peak performance” shape. His dash across the Linc was pretty impressive.

Oh, and we’re thinking the same thing as you: Is that a blue belly button?