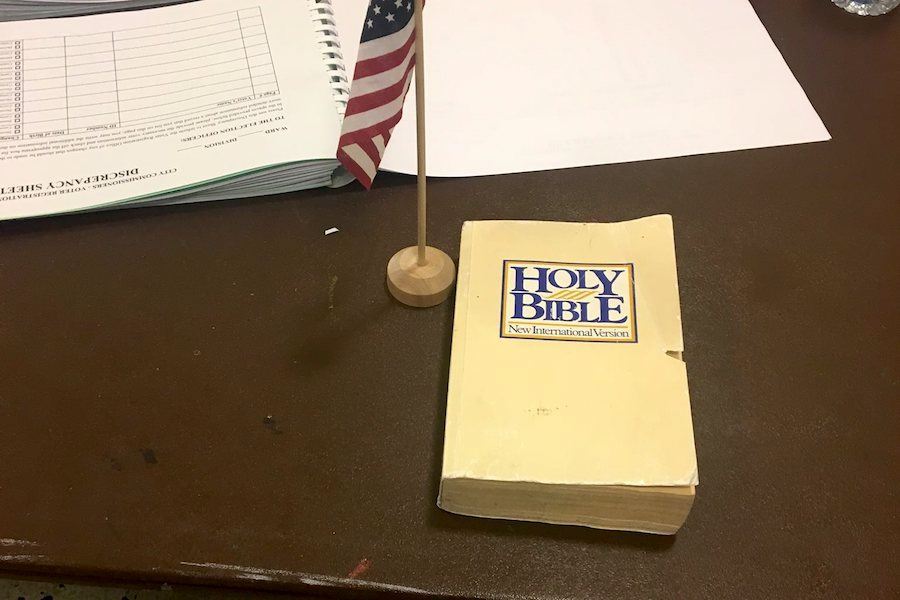 Some voters during last year’s primary in Philadelphia complained about a Bible on display. (Photo courtesy Jess Conda)

OK, so maybe not billions of complaints, but we started hearing about problems shortly after the polls opened at 7 a.m., and there are bound to be many more. So we put together this handy guide of common complaints — including, yes, when your polling place runs out of those “I VOTED” stickers — and what to do about them.

During last year’s primary, a polling place inside a church in Northwest Philadelphia didn’t open on time, because the janitor who had to open the building was running late. The city actually got a court order to break into the church.

“You don’t want to let anything get in the way of voting,” Philadelphia City Commissioner Al Schmidt, whose office is in charge of elections in the city, told us in an interview. “We will take extraordinary measures to make sure that happens, including breaking a lock.”

And Schmidt reminds voters that as long as you’re in line by 8 p.m. — the stated closing time for the polls — they have to stay open until your vote is cast, no matter how long that line is.

There’s a campaign worker wearing a Jim Kenney T-shirt while standing near my voting machine.

People inside the entrance to the building holding up campaign signs? No problem, just so they are at least ten feet away from the door to the room that holds the machines. So let’s say you vote inside of a classroom at a school. People can distribute campaign materials inside the school — just not within ten feet of the doorway of the classroom.

On Tuesday morning, one Philly Mag staffer faced a strange series of questions about his ethnicity and opinions on immigration posed by a poll worker when he went to vote. He didn’t personally feel intimated, but he understood why others might, so he reported the incident to the city.

During last year’s Philadelphia primary, some voters were intimidated by the presence of a Bible on the table at the polling place. According to Schmidt, some black Republican voters have reported being intimidated by Democratic poll workers. And who can forget the infamous case of the New Black Panther Party members who stood outside of a Philadelphia polling place in 2008, one of them holding a billy club?

The horror! No, there’s no law saying that the city has to provide you with an “I VOTED” sticker, but that doesn’t mean that Schmidt’s office doesn’t hear complaints when there are no stickers to be found. He says that his office does, in fact, go out to replenish supplies when a polling place runs out. So don’t worry, oh-so-politically engaged Instagrammer: You’ll get your sticker.

Nope. That’s voter fraud, and examples like that do come up, says Schmidt. The guy has lived in the neighborhood for 60 years, all the election workers know him and his wife, and they all know she’s a hardcore Democrat. What’s the harm in letting him press the buttons for her while she’s home sick in bed? Well, it’s illegal.

Of course, that’s not the nefarious kind of voter fraud that we tend to hear about. Since 2014, there have been 12 people indicted in Philadelphia voter fraud or election fraud cases, like workers literally adding fraudulent votes to machines at the end of the night.

The City Commissioners will be on hand at 215-686-1590 to answer voter registration questions — or to deal with things like those locked doors at 7:15 a.m. and your precious stickers.