“There’s no reason for the Bible to be out on the table,” says city commissioner Al Schmidt. 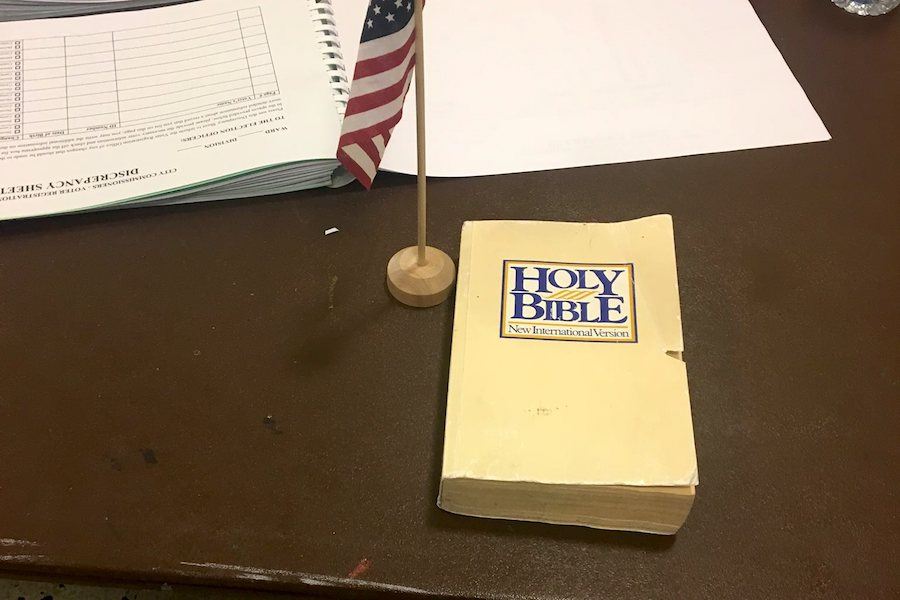 When Jess Conda walked into her polling place inside a community center at 12th and Wharton streets on Tuesday, the South Philadelphia resident says she was surprised by what she saw there. Sitting on a table with an American flag and that big book with all the voter names in it was a paperback copy of the Bible. And, well, she didn’t think that was quite right.

Conda, a local actress, took to Facebook to vent her frustrations.

“I just asked the woman at my polling place why the Bible is out … and she said they were told it ‘has to be there,’” she wrote. “That couldn’t be true, right? Everyone was very friendly, but this placement doesn’t feel right.”

Commenters were quick to weigh in, with one calling the presence of the Bible “intimidation plain and simple.” “Welcome to Trump’s ’Murica,” commented one friend. “Ewwww,” wrote another. “This makes me want to take a shower.”

Meanwhile, about a half-mile from the community center, South Philadelphia resident Elizabeth Fiend, a longtime activist, artist and performer, spotted a Bible at her polling place on Washington Avenue, inside a Vietnamese restaurant. She complained, saying that it was inappropriate and a type of voter intimidation. Somebody laughed at her, she says, but the Bible was promptly removed.

“Isn’t there something called the separation of church and state?” said Fiend, who is an atheist, when I asked her about the incident. “This is fundamentally un-American.”

And over in West Philadelphia, a Bible was the subject of controversy inside another polling place, where resident Robert Helms took issue with its presence. Here’s part of what he had to say on social media:

OUTRAGE. Voting Allowed For Christians Only…
The polling place Bibles are back in force, here in this Christ-encrusted political-religious cult encampment called West Philadelphia… The message is clear, and bigoted, and RACIST: No Hindu voters. No Jewish voters. No Muslim voters. No Atheist Voters may participate in today’s primary election. This election is for CHRISTIANS ONLY.

The offending Bible was eventually removed.

Conda, Fiend, and Helms all managed to get their votes in, but Conda wonders whether the presence of a Bible might dissuade others from voting.

“It might not be deliberate intimidation,” she tells me. “But it is certainly not welcoming. It might not have prevented me from voting, but what about an 18-year-old Muslim woman? Maybe she’d vote this time, but maybe she’d be intimidated enough to not vote the next time around. There shouldn’t be any kind of propaganda once I walk through those doors. It should be a neutral experience.”

@Commish_Schmidt Hi Commissioner, quick question, why do some precincts have Bibles out on the table for receiving voters? This seems very discriminatory against non Christians.

“There’s no reason for the Bible to be out on the table,” city commissioner Al Schmidt insisted when we called him about the Bible controversy. (Philadelphia’s three city commissioners are in charge of elections and voter registration.)

Schmidt explains that in the days preceding an election, the city distributes election board boxes to the judges of elections. The boxes include all the things that the poll workers would need to run the polls.

All poll workers must be sworn in, and a Bible can be used for that purpose, so the city offers the Bible as an option. It is in no way mandatory.

“It’s like when you’re testifying in court,” Schmidt says. “There’s a Bible available to swear someone in, but you don’t have to use the Bible.”

“But if a voter feels intimidated for any reason, they should bring it to our attention,” Schmidt adds.

“You know, I’m not actually intimidated by the Bible being there,” Fiend says. “I’m offended. It’s not appropriate to have the Bible on the registration table like that. I know that people vote in churches. That’s different. A poll worker chose to put this Bible on the table and have it facing the voter. I realize that as an atheist, I’m in the minority in this country, and I normally don’t say anything to anyone about this kind of stuff. But this time, I had to put my foot down.”

According to Schmidt, the main election hotline in the city received two formal complaints related to the Good Book being inside of polling places. When Conda called the hotline, she claims that a worker there put the phone down and said to a colleague that it was a “girl bitching about the Bible” and later hung up on her after saying, “Well, tell the FBI then.” Schmidt says he’s looking into those allegations.

All in all, Schmidt says, Primary Day in Philadelphia went “pretty smoothly.” One of the most serious issues was a polling place in Northwest Philadelphia that wasn’t open on time. The janitor was running late, so the city got a court order to break into the building and get the polls up and running. By the time the city arrived to do so, the janitor showed up and opened the door. It happened to be at a church.