Politicians are obsessed with banning smoking on the beach. Meanwhile, the insidious spray sunscreen menace chokes us all. 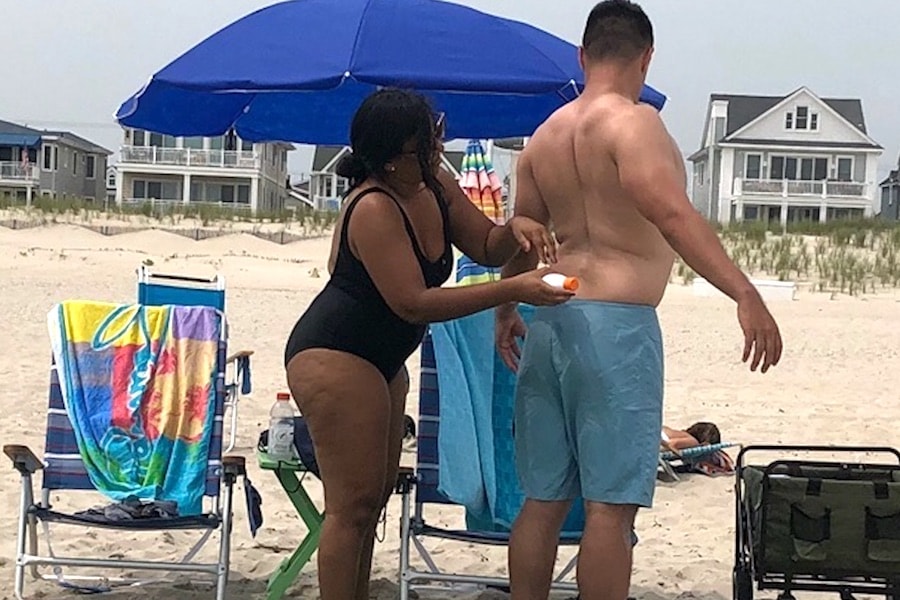 A woman dispenses spray sunscreen into the air and onto a man’s back (and into your lungs) at the Jersey Shore.

Smoking bans are all the rage at the Jersey Shore.

From Asbury Park down to Ocean City, Wildwood, and Cape May Point, it is now illegal to smoke at more than a dozen Jersey Shore beaches.

And NJ governor Phil Murphy just signed a new law that will ban smoking at all Jersey Shore beaches starting in 2019.

That’s all well and good.

Smoking is deadly. It has become entirely unfashionable. And so it’s downright easy to make laws banning smoking here, there and everywhere.

But do we really need to ban smoking on Jersey Shore beaches? Is it really that big of a problem? I think not. But as a guy who has been known to take a few puffs in his day, I decided to see what my wife thinks.

My wife hates cigarettes and the smoke they create. She has been to the beach with me literally countless times, and so I asked her whether cigarette smoking has ever once bothered her while she was sitting on the beach.

She wanted to say yes. She really did. She hates smoking that much. But when it came down to it, she couldn’t think of a single time when somebody smoking nearby really got under her skin. Or into her nostrils.

Oh, I guess if you’re stacked on top of each other on a Saturday in Ocean City, where the idea of personal boundaries and space is as ancient as the sea rocks, you might get a whiff here or there. But it’s not like you’re walking into a smoky bar in Delco, people. Let’s be real.

Instead of spending all this time and energy banning smoking at the Jersey Shore, we should instead address the true menace: spray sunscreen.

It wasn’t so long ago that when you’d go to the Jersey Shore, you’d bring along a bottle of sunscreen in lotion form. You’d squeeze the bottle into the palm of your hand — well, some less civilized people would just squeeze it right onto their skin, like they were squeezing ketchup onto a Hebrew National — and then you’d rub it in real good all over.

This was never a difficult thing. It was a system that worked well. A better mousetrap was not needed.

At some point in the not-so-distant past, some big brain came up with the idea to take sunscreen and weaponize it by turning it into an aerosol or mist. And, voila, spray sunscreen was born.

It’s impossible to go to the Jersey Shore these days without being attacked by spray sunscreen. People will be ten feet away from you — upwind, mind you! — and they pull out their can and just start spraying. As you watch them in their chemical cloud, you can see how much of the stuff is not actually hitting its intended target. It just goes into the air, wafts down the beach in your direction, and then into your nose, eyes and lungs. Your respiratory system becomes an innocent victim in a spritz-by.

All hyperbole, hysteria and literary license aside, when somebody sprays that stuff anywhere near me, I can literally taste it for a couple of hours. Not even a pungent Sack O’ Subs Italian hoagie with the works gets that spray sunscreen taste out of my mouth completely.

But it’s not just my own personal outrage that you should take into account.

Dermatologists have expressed concerns over spray sunscreen because it’s much harder to get full coverage out of it than with the standard lotion. You spray and spray and spray, but how much spray susncreen really winds up on your skin? Spray sunscreen users have wound up with serious sunburns in areas where they thought they had coverage. No fun!

Just take a look at the label of your spray sunscreen and think: Do I really want to be inhaling this stuff? No, no you don’t. Here are some warnings from spray sunscreen bottles: “Avoid inhaling” and “Keep away from face to avoid breathing in.”

Why don’t you just drink it by the gallon?

OK, so I know you’ve been brainwashed by advertisers and your clueless friends into thinking that spray sunscreen is somehow better for you, that it’s so much more convenient. And you’re probably not going to stop using it just because I (and the experts) say so.

So this Labor Day Weekend, as you head to the Jersey Shore for perhaps the last time this year, do me a favor. If you’re going to insist on using spray sunscreen, do so far, far away and downwind from any other human beings. Or, here’s a million-dollar idea: Just apply your spray sunscreen at home.

As for me, I’ll see you in Atlantic City with my good old SPF 30 Hawaiian Tropic lotion. Farewell, summer.