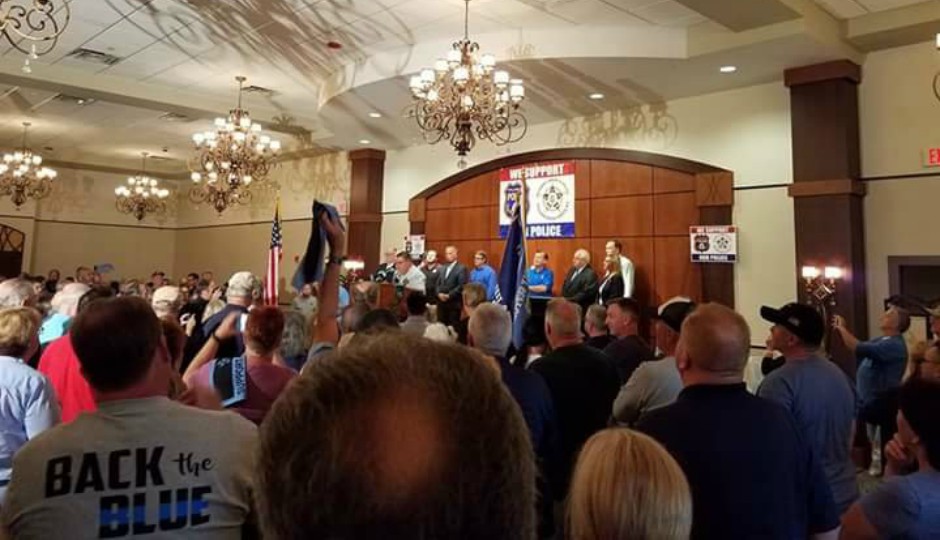 A “Black the Blue” police rally drew a substantial turnout on Thursday night in Northeast Philly.

John McNesby, president of Philly’s Fraternal Order of Police union, estimated that as many as 2,000 people showed up for the event at the lodge’s headquarters.

Thanks to the over 2,000 who showed for the rally! Community, cops, families , elected officials. THANK YOU #thinblueline

McNesby and other officers rallied to denounce a protest that occurred last week outside the Bustleton home of Ryan Pownall, a 15th District police officer who fatally shot David Jones in June. Police say Pownall stopped Jones for riding a dirt bike recklessly and that Jones reached for an illegal gun during a brief altercation. Pownall shot Jones in the back as Jones attempted to run away.

The shooting has spurred outrage from activists, including Asa Khalif of Black Lives Matter Pennsylvania and Isaac Gardner of the Coalition for Justice for David Jones, who led the protest outside Pownall’s house on August 24th. About three dozen officers, a SWAT team, a police helicopter and some angry neighbors responded to the contentious demonstration.

During an heated speech at Thursday’s rally, McNesby referred to the small group of protesters as a “pack of rabid animals,” according to Philly.com.

The news website also reports that City Councilman Brian J. O’Neill called last week’s protest a “stain on the city of Philadelphia” and said the city “should have a sacred trust with the family, not just the officer, but the officer’s family when they’re in their home.”

City Councilman Mark Squilla and Republican district attorney nominee Beth Grossman also spoke at the event, as well as Republican State Rep. Martina White, who has proposed a bill that would delay releasing the names of officers involved in fatal shootings.

One day after the Bustleton protest, the Philly FOP won a court ruling that allows the organization to seek an emergency petition to stop the city from releasing the names of officers involved in deadly shootings within 72 hours incidents occur, which is current Police Department policy. A full hearing on the issue will be held on Sept. 29th.

Attended the Back the Blue event tonight at the @FOPLodge5 supporting our heroes in blue! pic.twitter.com/3YY12B6vG3

Elected leaders and @FOPLodge5 at Back the Blue rally, denouncing the demonstrations at an officer's home last week @NBCPhiladelphia pic.twitter.com/m3pytrrHaY

A show of support for police officers and their families during #BackTheBlue rally hosted by @FOPLodge5 @KYWNewsradio pic.twitter.com/WZ3MblXuMe