Activists Protest at Home of Cop Who Shot David Jones

The small demonstration drew about three dozen officers, a SWAT team, a police helicopter and some angry neighbors. 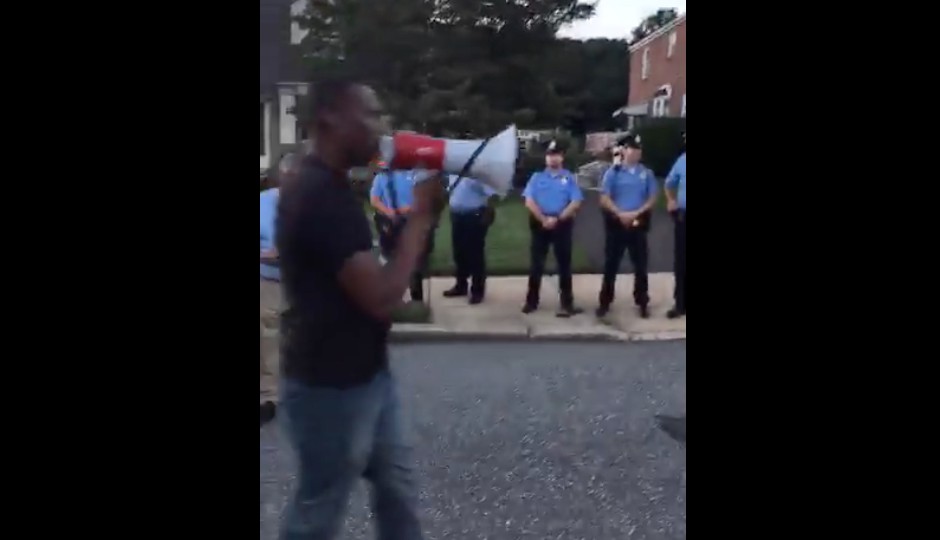 Via Christopher “Flood the Drummer” Norris

A small group of Black Lives Matter activists protested on Thursday outside the Bustleton home of Ryan Pownall, the Philly police officer who shot David Jones in June.

The rally, which attracted a heavy police presence and pushback from some neighbors, was the latest demonstration led by Isaac Gardner of the Coalition for Justice for David Jones and Asa Khalif of Black Lives Matter Pennsylvania. In recent weeks, Khalif and Gardner have brought the shooting of Jones and other unarmed black men to the attention of officials by disrupting City Council meetings, press conferences and other events.

Conflicting witness accounts of the June shooting have drawn the attention of activists like Khalif and Gardner and prompted an investigation by the Pa. Attorney General. According to police, Pownall was transporting crime victims on June 8th when he stopped Jones for riding a dirt bike.

Police say a brief struggle ensued, during which Pownall noticed Jones was carrying a gun. The gun reportedly dropped to the ground as Jones attempted to run away. Pownall shot Jones while he ran, according to security footage. Jones was not armed when he was shot. A witness claims said Pownall searched the ground where Jones lay after he was shot, appearing to search for the gun, which was located a few feet from where Jones had fled.

Protesters placed posters around Pownall’s neighborhood around 7 p.m. on Thursday. The posters displayed the officer’s photo and read “Wanted by the people of Philadelphia for the murder of David Jones.”

Activists outside the home of Ryan Pownhall, the .@PhillyPolice officer who killed #DavidJones, putting up 'WANTED' posters. #philly pic.twitter.com/c2rIx0hK2f

About three dozen police officers, a SWAT team and a police helicopter responded to the protest, which included no more than 10 demonstrators. Officers formed a line outside Pownall’s home as Khalif and several others shouted “No justice, no peace, no racist police.”

The demonstration attracted the attention of neighbors, including some who engaged in shouting matches with protesters and told them to leave.

The protest wrapped up after 8 p.m. No arrests were made.

Mayor Jim Kenney released a statement on the protest on Friday afternoon:

“I thank the Philadelphia Police officers who peacefully defused last night’s event. There are many Philadelphians and officers who are productively working to build police-community trust, including pushing for transparency and reform which Commissioner Ross and I both agree must continue. What happened last night did nothing to move those efforts forward.”

Republican State Rep. Martina White, who has proposed a bill that would delay releasing the names of officers involved in fatal shootings, denounced the protest in a statement on Friday.

White claimed the protesters attempted “to influence public opinion in a sensitive matter that is still under investigation by both the Police Department and the attorney general’s office.”

The rally was recorded by reporter Christopher “Flood the Drummer” Norris. (Disclosure: Norris is a contributor to phillymag.com and cohost of our podcast produced by Philadelphia magazine and WURD radio.)

This story has been updated to include statements from Mayor Jim Kenney and State Rep. Martina White.