Is the Philly developer planning a Piazza by the sea?

Philly developer Bart Blatstein has been playing real-life Monopoly, cobbling together parcels of property in Atlantic City — everyone’s favorite resort-town-slash-urban-metaphor. His snagging of the Pier Shops and Showboat made big headlines. And a recent set of acquisitions shows the beginnings of a plan to do, well, something in the city’s perpetually transitional South Inlet neighborhood. Blatstein is holding his cards close, so we asked Temple prof Bryant Simon, author of Boardwalk of Dreams: Atlantic City and the Fate of Urban America, to evaluate Bart’s moves. “He’s buying stuff for 10 cents on the dollar,” notes Simon. “I think in the short term it might work, and in the long term it might be great. He clearly has something big in his back pocket.” Whether that something is geared toward tourism (beach houses? A water park?) or permanent housing (a Philly telecommuter suburb?) is the question for Simon, who’s cautiously optimistic that the urbanism-minded Blatstein could get something meaningful done. 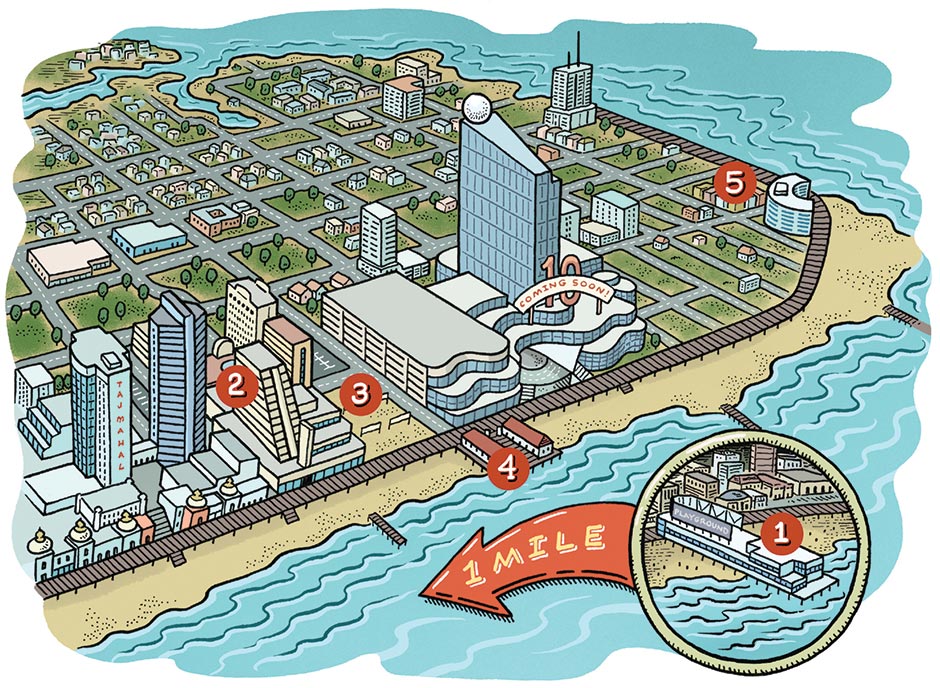 1. The Playground
November 2014: Bart Blatstein bought the Pier Shops at Caesars (which cost $200 million to build) for just $2.7 million. He reopened it as the Playground in 2015 with a promise to make A.C. “the capital of entertainment on the East Coast.”

3. The Volleyball Courts
February 2017: Blatstein bought three parcels of land for just $6 million, including a pair of lots next to Showboat that had previously been used as oceanfront volleyball courts. Future use: TBD.

4. Garden Pier
Part of Blatstein’s February haul is Garden Pier, former site of the Atlantic City Historical Museum, among other things. It sits right in front of Ten, the still-not-reopened (as of press time) mega-flop casino formerly known as Revel.

5. The Inlet Lots
The third piece of Blatstein’s February take is 12 small lots along the inlet, right around where the long-damaged inlet boardwalk will be rebuilt—thanks to an ambitious project by the city—and reconnected to the intact oceanfront boardwalk. This is the former site of the once-grand Royal Palace Hotel in the early 1900s.

Published as “A Piazza by the Sea?” in the July 2017 issue of Philadelphia magazine.