This Woman Should Have Won the South Philly Meatball Contest

As one of the judges, I thought her Vietnamese meatball was far and away the best. But the other judges weren’t having it, and one had some choice things to say. 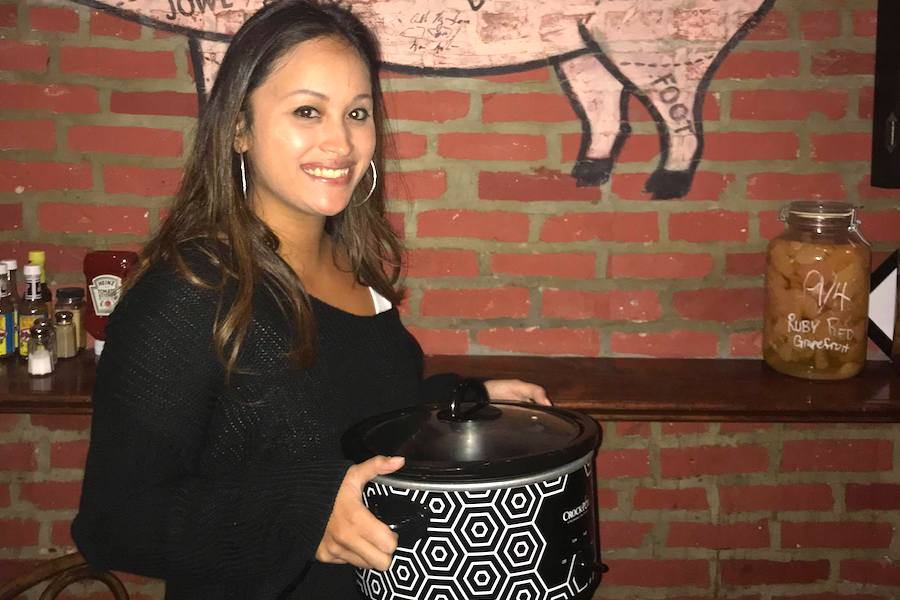 Lauren and her amazing Vietnamese meatballs.

No, Saturday’s South Philly Meatball Contest at Taproom on 19th didn’t end in riots and disaster. Jennifer Zavala and her dreaded hipster vegan meatballs were there (she didn’t place), and some remarks were made about them. That said, all in all, the peace was kept. But that doesn’t mean that there wasn’t meatball controversy afoot.

Zavala wasn’t the only competitor who entered a meatball that wasn’t trying to be the meatball that your South Philly Italian grandmother used to make. Among the 18 entries, there was also a Vietnamese meatball in the contest, and it was my favorite.

Although I’m an Italian-American (OK, so I have German in me too, but I’ve never identified with any of that, perhaps just because lasagna will always be better than schnitzel), I actually eat at Vietnamese restaurants more than I eat at Italian restaurants. And the Vietnamese meatball in the contest was as good as the best of those in Philly’s best Vietnamese restaurants. Flavor: Spot on. Texture: Perfect. It turns out that it was cooked by a Taproom on 19th bartender named Lauren.

“One of the best meatballs I’ve had in the city was at Cafe Mi Quang under the El,” Taproom co-owner Michael Strauss told me after the event. “Lauren’s was right there!”

The lead judge, an Italian American from South Philly, made that quite clear.

“Maybe if we were down on 8th Street, this would win,” he said, referring to the section of South Philadelphia where the Vietnamese population is strong.

“Can you imagine what would happen in this neighborhood if we let a Vietnamese meatball win?” he added.

“For me, this just doesn’t suit my palette,” said another South Philly Italian-American judge of the Vietnamese entry, even though he ranked it in his top three.

All of this conversation at the judges’ table was recorded, because we were all wired up for sound for the documentary that’s being made about the South Philly Meatball Contest.

Other fun conversations that the filmmakers probably picked up included the one judge explaining that he recently had to change the name of his restaurant from Kay Kay’s Cakes to just Kay Kay’s (if you say “Kay Kay’s Cakes” out loud, it pretty much sounds like you’re saying KKK, as he says plenty of others had noted) and another judge telling me how wrong I was in writing that Philadelphia should cancel Columbus Day.

But I digress. Back to the meatballs.

I should mention that I did accuse the other judges of simply being afraid to allow a Vietnamese meatball to beat Italian meatballs, and they all protested that thought outright.

As for the other meatballs, three were decent, three I spit out (I think I spit out four last year), and the rest were just barely passable. For an area of the city that prides itself on its meatballs, it’s kind of amazing that so many of the entries at the South Philly Meatball Contest are Olive Garden level or worse.