Oh Dear Lord: The South Philly Meatball Contest Is Back

And so are Jennifer Zavala's controversial vegan meatballs. Break out your riot gear. 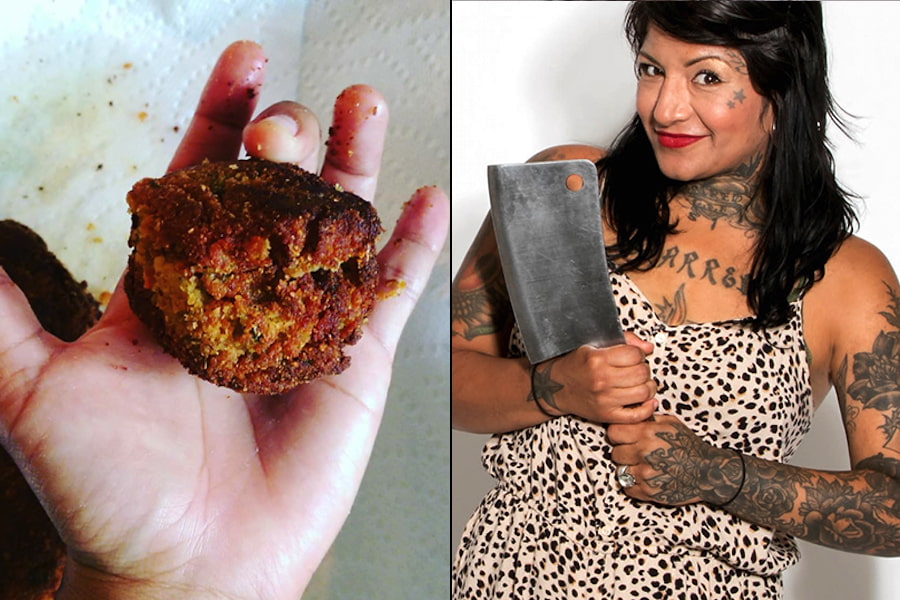 Left: The vegan meatball that caused all the drama at last year’s South Philly Meatball Contest. Right: Chef Jennifer Zavala, who entered the vegan meatball into the contest. (Photo by Claudia Gavin)

The next edition of the South Philly Meatball Contest will be held outside Taproom on 19th on Saturday, October 13th from 5 p.m. until 8 p.m. Anybody can enter. All you have to do is send your name, email address, and phone number to info@taproomon19th.com, along with a $10 PayPal payment. You can also pay cash in person at the bar.

Taproom on 19th is accepting 25 entries this year. All contestants will get one free beer or wine on the day of the contest, and the entire $10 registration fee will be donated to the Philadelphia Animal Welfare Society (PAWS).

The public is invited to come and taste the meatballs for free while a panel of judges (including me) will decide who has the best meatballs in Philly. Prizes are still being worked out, but they’ll include a $100 gift certificate to Taproom on 19th as well as the all-important bragging rights.

I judged last year’s South Philly Meatball Contest, and let me tell you: there were a lot of really, really bad meatballs. It’s kind of shocking that people could get meatballs so wrong. And it turns out that Zavala’s vegan meatballs — an old school Sicilian dish known as panelle — were actually some of the best. But that didn’t stop people from taking to social media to rage over the inclusion of a vegan meatball in a meatball contest.

“That should not have even been allowed,” wrote one person. “That will be the first and last time I attend the contest there. The yuppies are taking over South Philly.”

Another commenter called Zavala a “bitch.” There were death threats. And so forth. And so on. The controversy made it all the way to Fox News.

“I’ve never seen anything bring the neighborhood together so much and divide it at the same time,” says Taproom on 19th co-owner Pete Fry.

Zavala assures Foobooz that she and her vegan meatballs will be making a return to this year’s South Philly Meatball Contest.

“People will wish cancer on your already-dead grandma over a parking spot and death upon you for competing with vegetables,” Zavala says. “Sounds like a challenge to me!”