Six years after he shuttered his acclaimed Rittenhouse Square restaurant Mémé, the opinionated chef is getting ready to expand Capogiro Gelato nationwide. 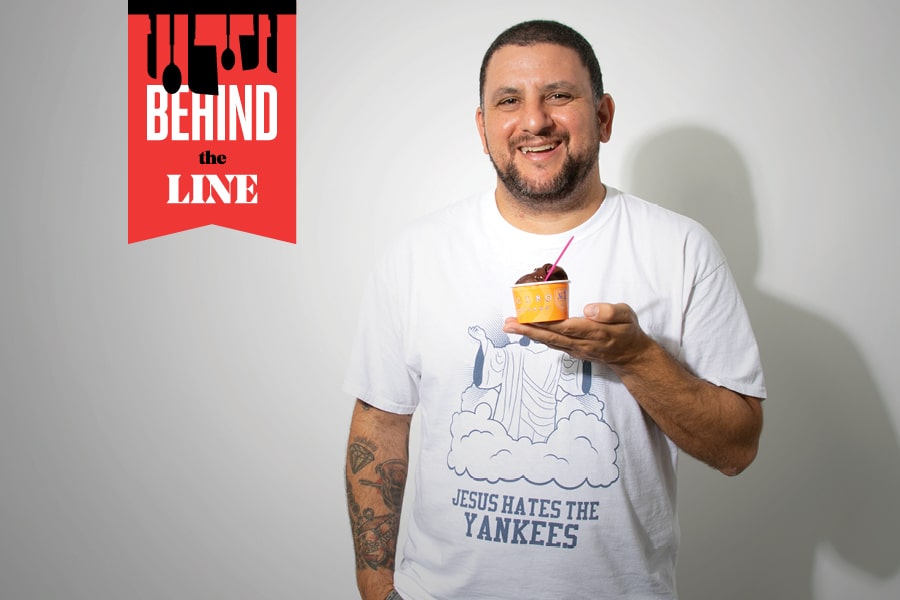 Capogiro Gelato just announced that the company is moving toward national expansion. To that end, Capogiro has hired as its culinary director Philly chef David Katz, whom you’ll remember from spots like Honeygrow, M at the Morris House Hotel, Mémé, and Salt. We caught up with Katz, 41, to see why the hell he wants to suddenly sell Capogiro gelato.

I grew up in… Cape May County, in a small offshore town that was a lot more grimy and real-lifey than Cape May itself, and very blue collar. I’m pretty sure I was the only Moroccan Jew who ever lived in that area, so I got in a lot of fights. You had the beach in the summer, but in the winter, you’d either stay in the house or go out and get in trouble. I opted for trouble.

I came to Philly… in 1997, because I wanted to get the hell out of the town I grew up in. I realized during my senior year of high school that I wasn’t going to go to college to play baseball like I had planned. I just needed to get out.

These days, I live in… Collingswood. We moved here five years ago. My wife, Cathy, and I moved to Collingswood after I sold Mémé. We wanted to get out of downtown. We had two kids, who were small at the time, and Philly schools leave a little to be desired, and we didn’t exactly have money for private schools.

I learned to cook… from my mom at home and then I really learned how to cook at my first job in Center City, which was at Lilies under Corbin Evans, the first real chef I ever worked for. Nobody will remember Lilies. It was at 12th and Sansom.

The other Philly restaurants I’ve worked in are… Jon Myerow‘s Pollo Rosso in Chestnut Hill; Bleu and Avenue B for Neil Stein; Salt for David Fields, that squirrelly photographer guy who owned it, but it was a great job because Vernon Morales worked there; M, where I was the chef. And then I opened Mémé. And I recently worked for Honeygrow as the culinary director. That’s the edited list. I don’t wanna make it sound like I’m a big bounce-around guy.

When people tell me I should open my own restaurant instead of working for Capogiro Gelato, I say… are you going to pay my bills?

When somebody tells me they want to open their own restaurant, I secretly think… who the hell is gonna pay your bills?

One Philly restaurant I will never step foot in again is… one that I won’t name. But here’s what happened recently. The oysters were hacked up and not shucked properly. The burger was $17 and had a bunch of stupid burger sauce all over it. The service was pretentious. And the Miller High Life was like $7 a bottle, I think. And that was for lunch. And we were the only fucking people in there.

One Philly bar I will never step food in again is… McGillin’s. I went in years ago and knew in 30 seconds I’d never go back. Crowd too college-y, bad music on, people singing along to it. It was just like a college party with a few alcoholic uncles there weirding up the scene even more.

One Philly restaurant I’m dying to try is… Vedge.

Restaurant critics are… necessary but frustrating.

Food bloggers are… people who need to find something else to do.

The most underrated restaurant in Philly is… El Rey. It’s busy and I’m sure they are doing well, but I’ve always felt it was a little underrated. Never too much talk about it, but the food is always great. It doesn’t have the decor of any of the taquerias in South Philly, but I’ve always thought the food was better than any of those places.

Between a cheesesteak and a South Philly roast pork, I would always choose… a cheesesteak. Roast pork is overrated. It’s a pretty fatiguing sandwich to get through. Ironically, my favorite cheesesteak is at John’s Roast Pork. I love it. Second is Chink’s, which is now Joe’s. And third is White House in Atlantic City.

If you’re coming to my house for dinner, I will probably make… something on the grill, even if it’s winter. And more than likely Moroccan.

If you really want to piss me off… talk to me about the fucking Yankees having 27 World Series rings.

One thing restaurants do a lot that I can’t stand is… servers asking, “Have you dined here before?” Also, “Let me explain to you how our menu works.” And what’s with restaurants that feel the need to have a burger? Enough with the restaurant burger already.

I think the next big restaurant trend in Philly is… food halls.

My standard pizza order is… one white and one pepperoni from Tacconelli’s.

The last fast food I ordered was… Taco Bell. Proudly. What don’t I get there? I am a big Cool Ranch Dorito taco guy and I love the chalupas and that Crunchwrap Supreme jawn a lot.

I decided to come work for Capogiro Gelato because… I always had a lot of respect for the product and the owner, and the potential is seriously high with that good of a product. With capitalizing on the wholesale and foodservice end, the potential is unlimited.

The tricky thing about the gelato business is… that it melts.

For breakfast, I usually eat… a bagel with butter and salt on one side and cream cheese on the other. Unfortunately, I live in South Jersey, so great bagels don’t really happen, but surprisingly, the Wegmans bagels are really good — as in they are really very passable.

The biggest mistakes that home chefs make are… cooking with salted butter and not getting the pan hot enough.

When I’m cooking, I like to listen to… reggae.

If you’re buying me dinner, let’s go to… Barclay Prime, because I’m gonna stick it to you a little bit. I love steakhouses, and Barclay Prime is the best.

My favorite Philly neighborhood for food is… Chinatown, duh.

My biggest hero of the Philly food scene is… Stephen Starr. He changed everything. Philly was X and then it became Y when he started doing his thing. People can’t even understand what he did for us. It’s hard to quantify.

One thing you should never put on a burger is… mayonnaise.

The most unusual thing I’ve eaten is… those little live octopuses at a sushi restaurant in New York.

If you want to come work for me, you better be… on time.

The most overrated restaurant in Philly is… the Capital Grille. So many fucking people go there. I don’t get it.

The person you should really be interviewing for this series is… Joey Baldino from Palizzi Social Club. It’s awesome, and Joey is quiet, and I don’t think people get exposed to him and what he thinks about food. You need to talk to Joey.

If I could change one thing about the Philly restaurant biz, I would… somehow make it so there is magically enough people to fill seats Monday through Thursday in all these good restaurants.

If I owned a restaurant that Donald Trump walked into, I would say… “We don’t serve well done steaks with ketchup here… get your orange ass outta here.” He’s a racist, a sexist and a crook. An an embarrassment on a global level.

The Philly restaurants I miss the most are… Percy Street BBQ when Cook N Solo owned it. Erin O’Shea was one of my favorite chefs ever in Philly. The brisket was as good as any I’ve had at any of the heavy-hitter places around the country, the sides were always perfect, and the desserts amazing. And, of course, Little Pete’s!