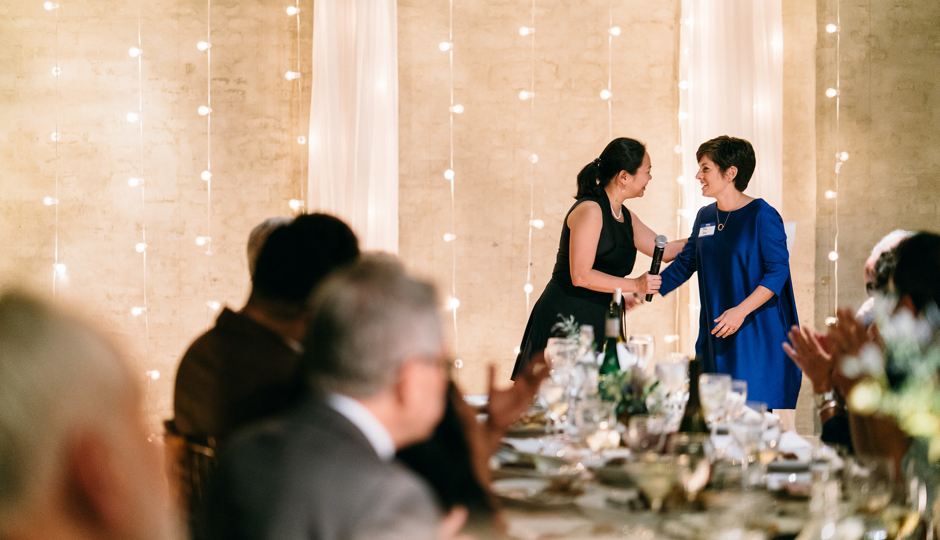 Name tags can be so impersonal — which is strange, seeing as they convey to strangers something intimate and individual: our names. It’s just that when you’re wearing one, so is everyone else in the room, and that kind of uniformity can feel withdrawn from any sense of diversity.

But at last Monday’s Muhibbah dinner — a celebration dedicated to our city’s storied and still-prevailing immigrant community — our name tags included our names and our favorite foods, because food can be a very personal and unifying thing. Because, really, this dinner was an 80-seat ode to the Philadelphia palate — our cultural makeup intertwined with all sorts of goodness, struggle, camaraderie and divisiveness.

Food is just a good place to start. 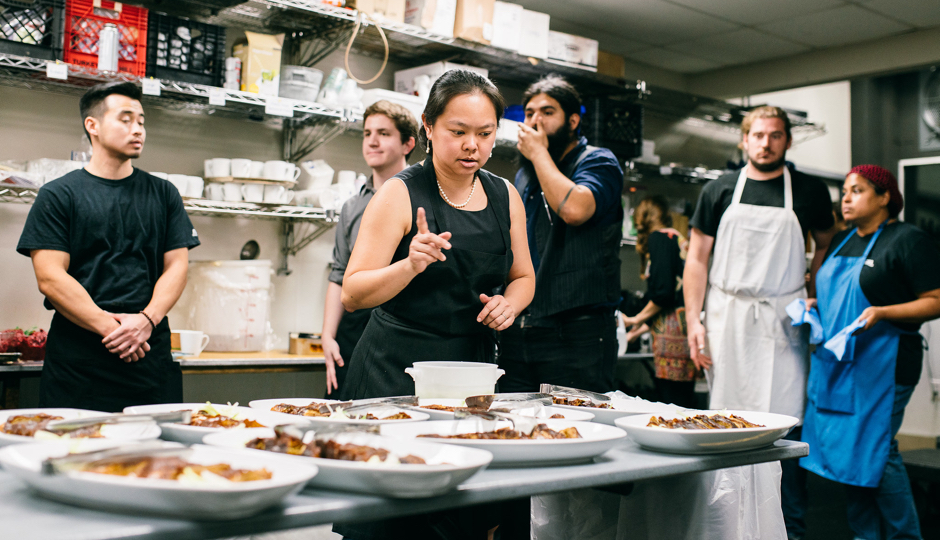 Ange Branca with her Muhibbah crew | Photo by A.H. Pham

Ange Branca, chef-owner of Sate Kampar, named the series after the Malay term “Muhibbah” which describes the “harmony of multiple races, religions and cultures coming together in the spirit of peace and tolerance.” She launched the dinners last June mainly as a method of coping with the current political climate. President Trump, as you know, proposed cutting the refugee quota to under 50,000 — the lowest it has been since 1980 — and continues to instigate and perpetuate fear and resentment of the “other.” In September, we learned that more than 5,000 DACA “Dreamers” are currently at risk of being deported in Pennsylvania. And just this month, the U.S. Department of Justice sent warning letters to five different jurisdictions (Philly included) alerting them of its intent to withdraw funding to sanctuary cities — which, according to Attorney General Jeff Sessions, “adopt the view that the protection of criminal aliens is more important than the protection of law-abiding citizens and of the rule of law.”

So Branca and company did what they could to get involved: They tapped their network and put on a big, family-style dinner with some of the city’s best chefs — many of them expats themselves — to showcase and support the city’s strong, vibrant immigrant community. Each dinner donates all of its proceeds to a chosen organization in Philly that supports immigrants and refugees. So, earnings from the first dinner (in June) went to the Hebrew Immigration Aid Society of Pennsylvania; Monday’s (which took place at Front and Palmer in Fishtown) went to the Nationalities Service Center, an organization which provides immigrants and refugees with legal services, language classes, access to health care, and employment opportunities. 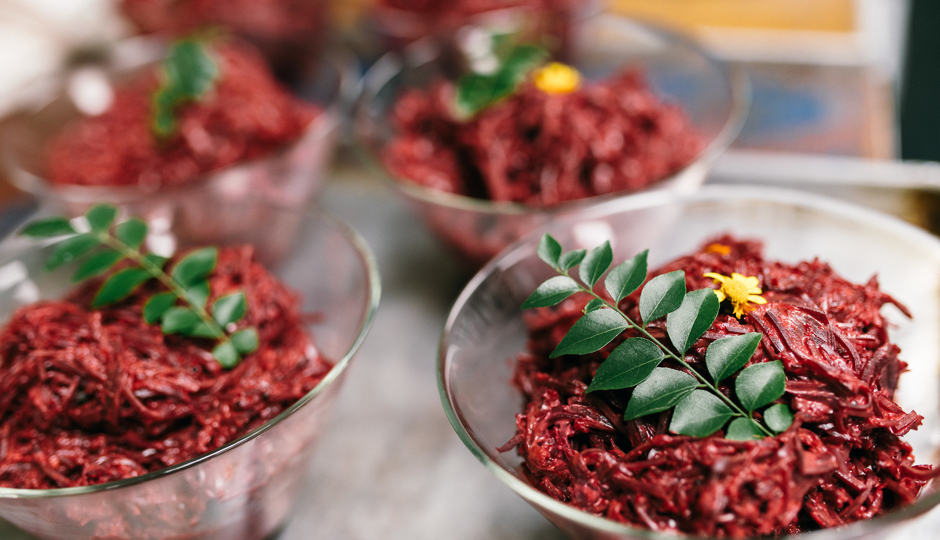 The guests who attended Monday’s dinner started the night by sharing their favorite foods, which, of course, led to their stories, their struggles, their concerns. While forking through chef Damon Menapace’s canederli (bread dumplings from Northern Italy), presumptive DA-elect Larry Krasner got up with a list of “good ideas” — the first being Brooklyn DA Eric Gonzalez’s commitment to “minimizing collateral immigration consequences of criminal convictions, particularly for misdemeanor and other low-level offenses,” the second being the Muhibbah dinner itself. We fanned our mouths from Kantima Dangkhuntong’s (who immigrated here from Thailand) fiery-sour fish curry and listened to Nina Ahmad (the city’s Deputy Mayor for Public Engagement) gush about Philly, how far it’s come, and how far it’ll go. But also about how this city has a habit of building and prospering on the backs of non-willing immigrants and refugees. And how those who can (like those who can afford a $125 Muhibbah dinner), should leverage their privilege in support of them.

So the evening started with a goofy name tag icebreaker, and it ended with a call to help our neighbors fight for their human rights.

And that was the point. That’s why the dinner exists — and matters. Because today, when things are the way they are, we don’t get to be so blissfully ignorant. We don’t get to eat out without confronting these issues — or at least we shouldn’t. And since these discussions have become so unavoidable, since we ought to be talking about things like refugee rights and immigration reform, it only makes sense to start with our favorite foods, for both practical and, you know, metaphorical purposes.