Here's what local officials, business leaders and activists have to say about Trump's stunning decision to end DACA. 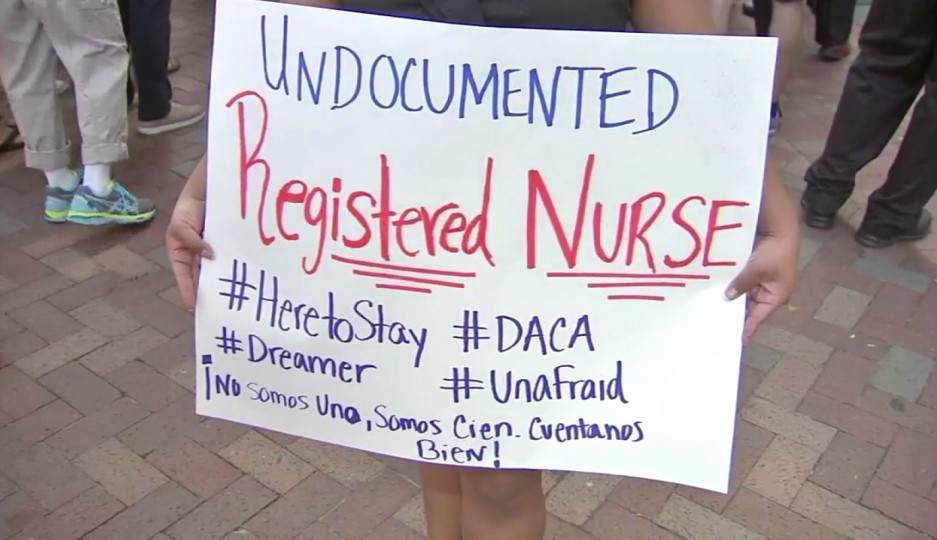 The White House announced on Tuesday morning that President Donald Trump plans end the Deferred Action for Childhood Arrivals program, which has allowed nearly 790,000 people who were brought the U.S. illegally as children to remain in the country while they work or attend school.

During a press briefing today, Attorney General Jeff Sessions said that Congress will stop renewing work permits for program recipients – often called “Dreamers” – in six months. Congress has until then to come up with a potential replacement for the program, Sessions said.

The decision has spurred backlash from immigrants rights groups, business leaders (like Apple CEO Tim Cook) and politicians around the country. In Philly, a sanctuary city known for its progressive immigration stance, officials and community leaders have spoken out against plans to end DACA.

Hundreds of protesters, including Democratic Philly District Attorney candidate Larry Krasner and City Councilwoman Helen Gym, gathered outside the Department of Justice building in Old City this morning in support of the program.

“Ending the DACA program is not only cruel, it is detrimental to our health as a nation and inherently un-American. Those who have benefitted from the DACA program came here with their parents searching for a better life and more opportunities. They escaped violence, natural disasters and hunger. Today, many are thriving as students and young professionals, and contributing to the vibrant fabric of our nation. In Pennsylvania, DACA has allowed nearly 5,900 young people to come forward, pass background checks, and live and work legally in the country.  Ending DACA would cost Pennsylvania nearly $357.1 million in annual GDP losses. To our Philadelphian DACA recipients – we respect you, we love you, and don’t let anyone ever tell you you’re not an American.”

Sen. Bob Casey called Trump’s decision on Tuesday “an insult to America and our values” and “profoundly unjust, immoral and without regard for basic fairness.”

It'll cost us jobs, it'll hurt our security. It's a total betrayal of the trust of the federal government.

The ‘Dreamers’ are young people who have lived in our country since they were children.

Our government promised them that they would be protected if they came forward and now President Trump is breaking that promise.

which would allow the Dreamers to become permanent residents if they meet the very stringent qualifications outlined in the bill.

Last week, Philly Archbishop Charles J. Chaput expressed support for the program, claiming in a statement that it’s “one thing to tighten the security of our borders and to deport violent criminals” but “it’s a different and much uglier thing to punish young people who’ve grown up in the United States as their home.”

“At the University City Science Center, we are committed to ensuring that the pipeline for the future innovation workforce is filled,” Tang said in a statement. “This will ensure a strong future for our city, our state, our region and our nation. I don’t believe that we can afford to turn away people who want to live and work here as responsible members of our society, just because they were born outside of our borders – nor should we make it difficult for dreamers to stay here and reach their full potential.”

Others have weighed in on social media.

I agree with @POTUS that there should be a legislative solution instead of a DHS directive that was never intended to be a permanent fix.

Rescinding #DACA may be the single cruelest, most heartless thing a president has ever done. The exact opposite of what America is all about

#DACA Dreamers are my Philly neighbors. They live and work here. They belong. This is their country as much as mine or anyone's. #SaveDACA

This #DACA news has Twitter blowing up. Rally in Philly. CEOs speaking up and out. People are hurt, angry and surprised. I'm one of them.

"the people united will never be defeated!" In the Philly streets to #DefendDACA ! #DACA pic.twitter.com/MCK1FSh3Ss

Girls Inc of Greater Phila & So. NJ stands with the 800,000 young people protected by the DACA program #DefendDACA #DreamAct pic.twitter.com/TOb88MPgLA

Maria, a DACA recipient, is exhausted from fighting for her humanity but will not stop the fight for #DACA #SaveDACA pic.twitter.com/D9m6DP1mel

This story has been updated to include a statement from the University City Science Center.