The Stephen Starr, Jean-Georges and Top Chef alum is no fan of kale or tardiness. 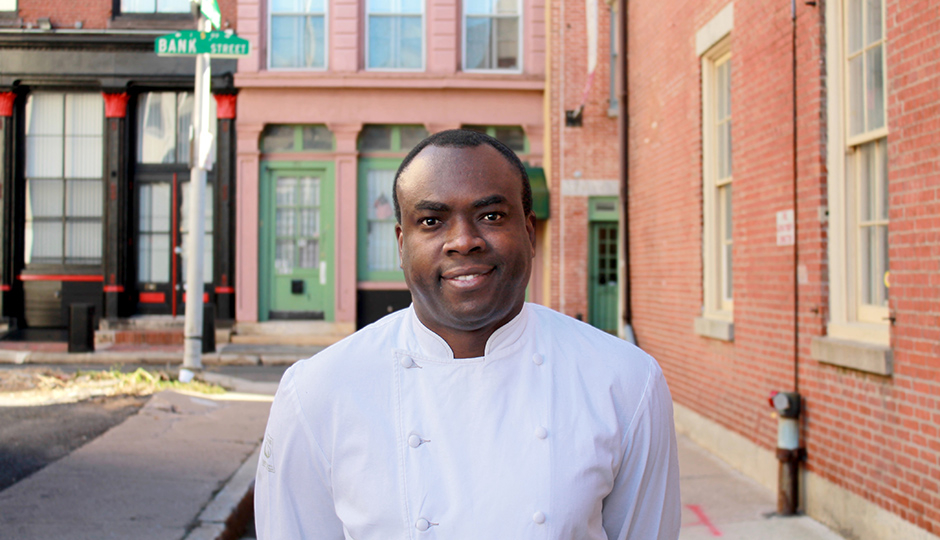 Behind the Line is Foobooz’s new weekly interview series with the people who make up Philadelphia’s dynamic bar and restaurant scene. To read last week’s Behind the Line with Michael Solomonov, go here.

We’ve been waiting and waiting and waiting for Maison 208, the new 13th Street restaurant from Sylva Senat, the Haitian-born chef whose trajectory has taken him through the kitchens of Stephen Starr, Jean-Georges Vongerichten, groundbreaking Indian restaurant Tashan, and, most recently, Bravo’s Top Chef, where he had quite the respectable run during the last season. Well, Maison 208 is set to open any day — hello, City of Philadelphia, please sign the paperwork! — so we asked Senat to break it all down for us.

I grew up in… Port-au-Prince, Haiti. I moved to the United States when I was eight or nine years old. And I have never been back to Haiti. One of the reasons we moved here is that my mom died, and so, it would just bring back sadness.

My first important restaurant job was… my very first restaurant job. At the Sign of the Dove. It was a very high-end New American restaurant in New York. I was just coming out of high school, and it was part of an internship program called C-CAP that helps urban youth. When you want to be a chef or restaurant owner, they send you into a kitchen for nine weeks to see if you like it or not. It happens that I like it.

My first Philly restaurant job was at… Buddakan. I actually opened Buddakan NYC and then I went to Puerto Rico for a restaurant and then Stephen Starr convinced me to come to Buddakan here.

Maison 208 will finally open… very soon. We are awaiting final certifications from the City of Philadelphia. The issue of building Maison 208… this is not a restaurant we took over or a space we renovated. Maison 208 is a brand new building, and the stuff we have to go through is bigger than a normal restaurant opening. Right now, I’m literally watching two Philadelphia Water Department guys in a hole out front. We have 20 people on the first floor right now training. I have 15 cooks coming in at 2:30… It’s just like, our water was turned on three weeks ago but you forgot to put the water to the sprinkler system. You can’t make this stuff up.

One spice I can’t live without is… turmeric. I fell in love with it at Tashan, but I had it going back to childhood. I just love the qualities of it and the vitamins in it.

The last fast food restaurant I ordered from was probably… Chick-fil-a. I actually just started getting into fast food. My daughter — she’s seven — is in love with Chick-fil-a, and it’s the only fast food I allow her to eat. Once a year, my wife brings me a Big Mac.

Stephen Starr is… a godsend to Philadelphia. He gets the raw end of the stick sometimes, but he is the reason why Philly is being saturated with good and great and talented chefs. 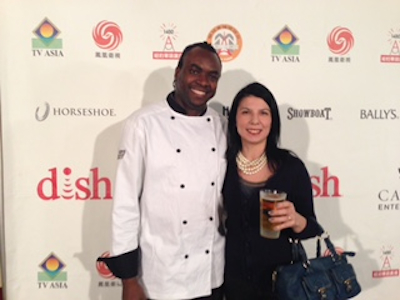 One kitchen tool I cannot live without is… definitely my Japanese chef knife. Japanese steel. I wish someone had told me a long time ago not to waste my time with anything else. I’m slightly spoiled, because my wife is Japanese, and my father-in-law and mother-in-law send me knives around my birthday from this beautiful little shop in Osaka.

My daughter always wants me to cook her… lasagna. She makes it with me. She is the master of the lasagna.

The mosts famous person I have ever cooked for was… all of the chefs. When you’re a cook at Jean-Georges, you cook for them all. José Andrés, Thomas Keller, Daniel Boulud. And Beyoncé and Jay Z.

If Donald Trump shows up at Maison 208… we would treat him as a guest as we should, because hospitality is first. But I’d ask him what the hell he is doing.

The best restaurant near my home is… High Street in Old City. I love Fork for anniversaries, but High Street has become our casual drop-in.

The experience of opening my own restaurant has been… lonesome.

If you only order one thing at Maison 208, make it the… French snapper.

My Top Chef experience was… amazing. It brought out a lot of hidden secrets in me. I never really pushed myself to create a dish in 20 minutes.

If you’re pouring me a drink, make it… Gentleman Jack or Champagne. I’m easy.

My standard pizza topping is… pepperoni and sausage. I love Bufad. My family loves Nomad on South Street. When we’re in Center City, we go to Pizzeria Vetri.

One restaurant trend that needs to die is… kale. Can we just get rid of kale? And fried Brussels sprouts. It’s been five years. Just be done with it.

One type of restaurant that Philly really needs is… Tashan. Philly needs Tashan back. Truly taking ethnic cuisine and putting it on that plateau. Eating ethnic food doesn’t have to mean that we’re eating off of paper plates somewhere in West Philly. After I left, I really wanted it to succeed, but… the passion was in me but not with the ownership.

I overindulge in… Godiva white chocolate.

A seriously underrated restaurant in Philly right now is… Aldine. Fucking Sabatino’s the man. The fucking guy is making his own butter and yogurt. As chefs, we follow him and we see the passion and the love, but I don’t think the rest of the city is paying attention.