Get ready for your muscles to shake in Y2B Fit's TRX Barre class in Mt. Airy. 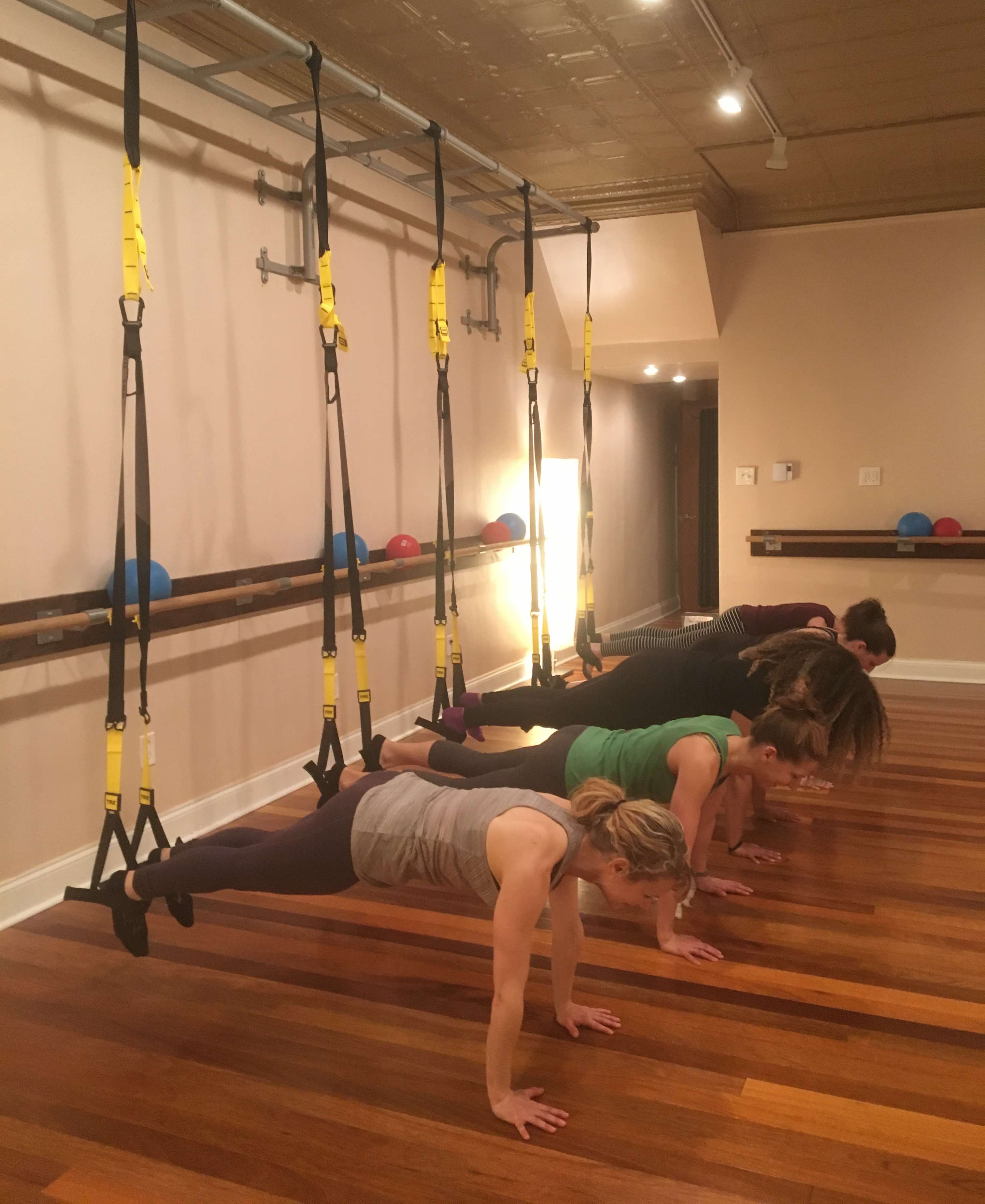 The rain pattered outside on a dark Wednesday night, but the five of us in Y2B Fit’s Mt. Airy studio couldn’t hear it over all the grunting. Our feet hanging in TRX bands, we were groaning, exclaiming, and panting all over the place as we struggled to maintain trembling planks. Forget the pikes Y2B Fit founder and instructor Crystal Widmann had demonstrated. It took enough effort not to fall flat on our sweating faces in plank.

This is TRX Barre, one of the many barre fusion workouts we’re seeing in Philly lately. It combines barre, HIIT, and TRX into a 45-minute class, and it is, to put it simply, hard. Sure, anyone who thought a class called “TRX Barre” was going to be chill has maybe never used a TRX band — to her/him/them, I say ignorance is bliss, my friend — but there’s a reason Widmann recommends you take three normal barre sessions at Y2B Fit before jumping into this intense hybrid. It. will. humble. you. — but that’s a good thing.

We started with the bodyweight/HIIT portion, doing variations on forearm planks as well as leg bends and circles similar to the tiny, isometric movements you would do at the barre. (Take: It is amazing your leg can shake so much when you’re barely bending it.) Then we moved to the barre, going through the standard thigh-quaking exercises with heels up, knees bent out, ball squeezed in between the legs — and those killer “down an inch, up an inch” movements. This part of the workout was, blessedly, short.

Finally came the dreaded (at least for me) TRX segment. We did lunges, curtsy lunges with jumps, bicep curls, planks, and more, all incorporating the bands. While it was definitely difficult, it was also the part of the class I remembered the most clearly and the one that took exercises I was used to and made them interesting and challenging. Which, hey, that’s what fitness is supposed to do! (Sometimes they were a bit too complicated, but I’m also not the best at mastering new moves immediately.) No wonder: Widmann has a master’s degree in exercise science, and she loves designing new sequences and programs. Thank god, though, that we weren’t doing barre movements with the TRX bands. (Don’t get any ideas, Crystal.)

At the end, we returned to our mats for some final ab work with the ball, like oblique crunches, and child’s pose to recover. The fact that Y2B Fit is also a yoga studio is super helpful because Widmann, a 200-hour yoga teacher training program graduate, was able to effortlessly weave yoga postures into the class in a way I dug. Your legs might be quivering at the end of TRX Barre, but at least they’ll get to calm down asana style.