12 Fun Things to Do With Kids in Atlantic City

From fishing on a boat to taking in the view from the country’s third-tallest lighthouse. 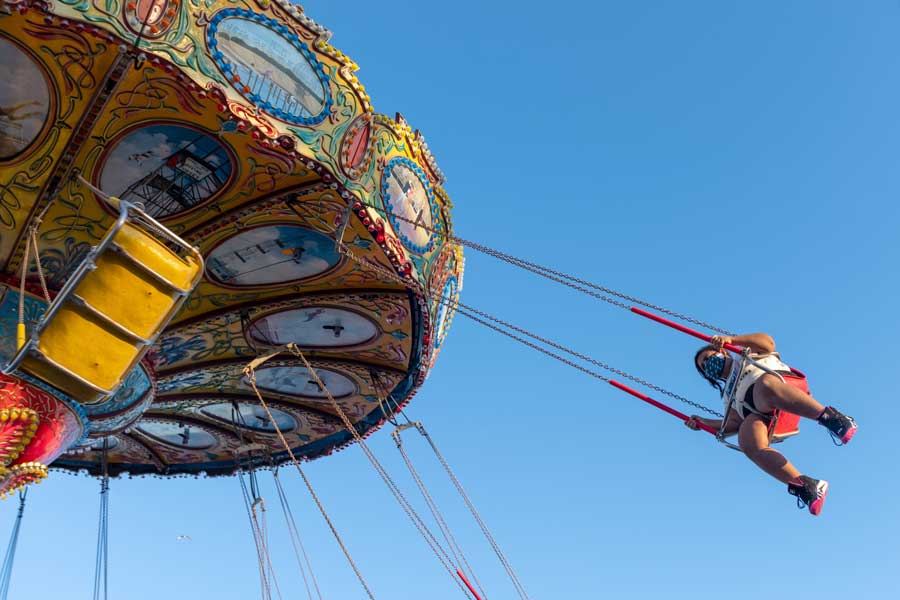 Taking a ride on swings or the giant Ferris wheel at Steel Pier are among the great things to do with kids in Atlantic City. Photograph by Alexi Rosenfeld/Getty Images

Yes, Atlantic City is a town known mostly for its casino action for the grown-ups. But there are plenty of fun things to do with kids in Atlantic City. Here are the best.

Go to the Arcade

Not just any arcade, but Bart Blatstein’s huge new Lucky Snake arcade inside Showboat. This Atlantic City arcade has it all: the world’s largest Pac-Man machine. Virtual reality motorcycles. Frogger. Halo. Minecraft. Fortnite. Skee-Ball. Boardwalk-style basketball machines. And for stressed-out parents, four (yes, four) bars where you can grab a drink to sip while you’re following the kids around. 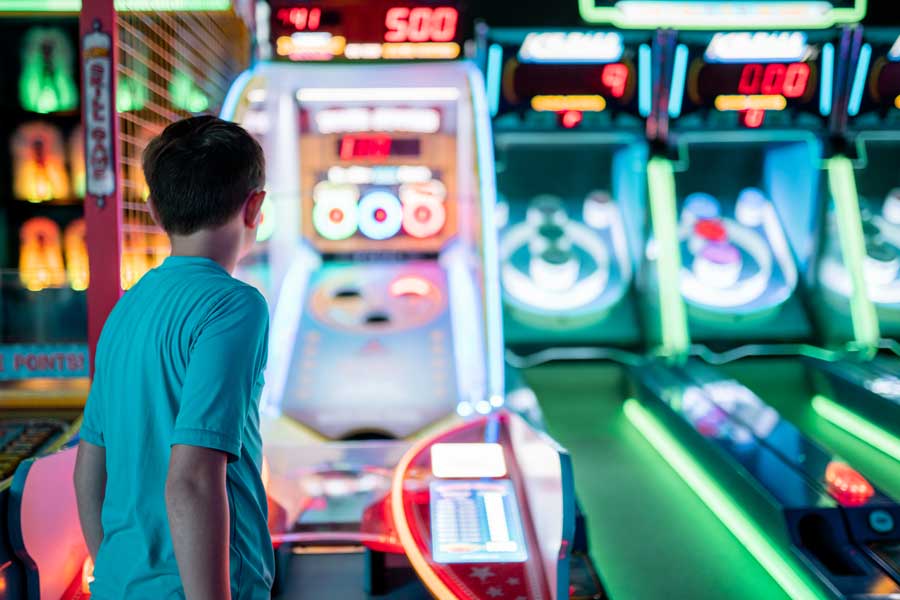 The Everything 99 Cents shop at 1402 Boardwalk isn’t one of those “dollar stores” where some stuff is a dollar and other stuff is more. The name says it all. Everything is 99 cents. Everything. For my money, the best thing you can purchase is the shop’s 99-cent kites. My kids have occupied themselves for hours with these things. No, the kites won’t survive until it’s time to head back home. But for 99 cents, who cares? If you want to spend $50 at some kite shop on a toy that will also likely get destroyed, be my guest. 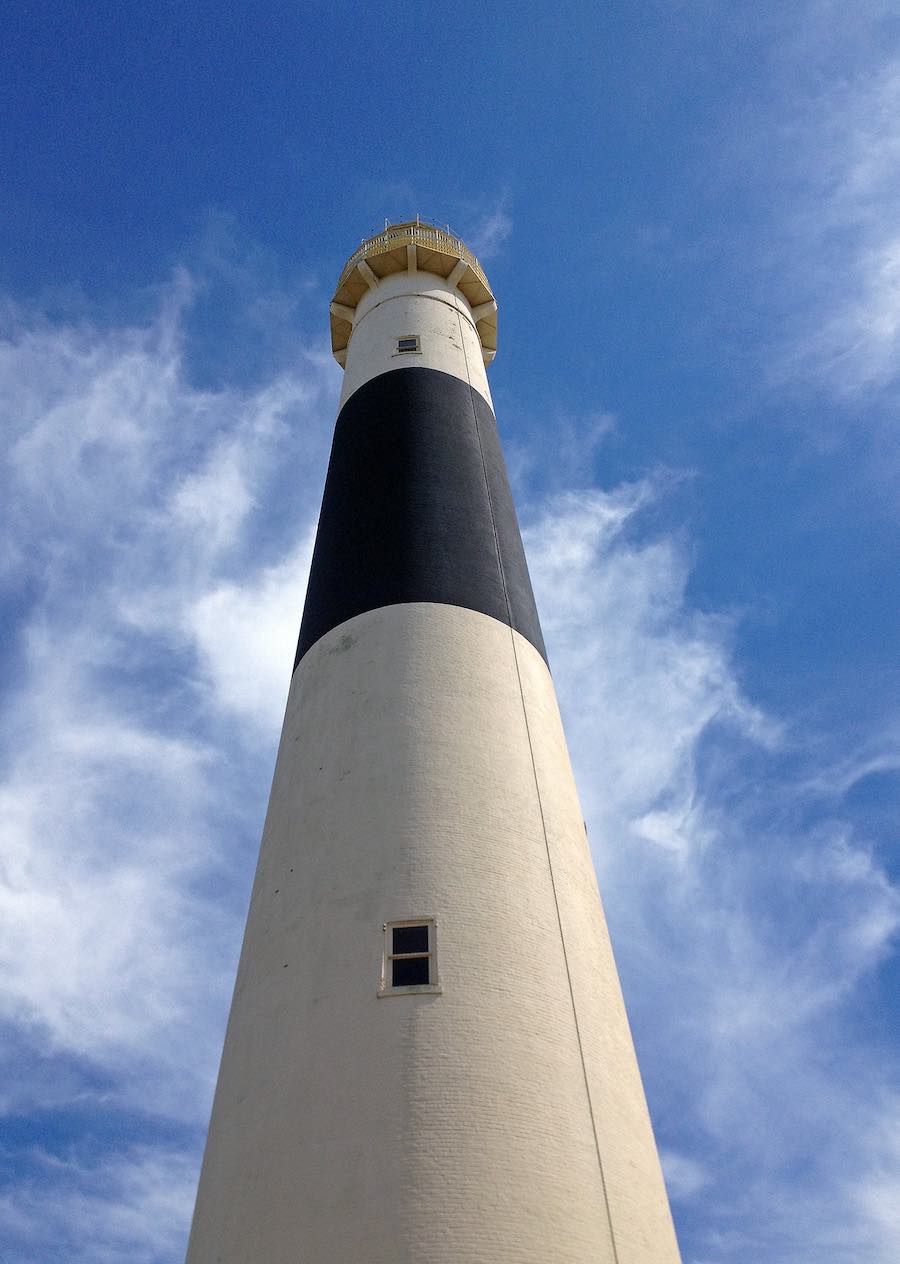 The Absecon Lighthouse in Atlantic City (photo via Flickr/CC)

The Absecon Lighthouse is, believe it or not, the third-tallest lighthouse in the entire country. Want to wear the kids out? The 228 steps up to the top should do the trick. Of course, that means you have to walk up, too. It’s more than worth a visit.

Hang Out at Bartram Beach

Duh. Of course you’re going to hit the beach in Atlantic City. But what beach? That’s the question. If you’re staying in a Boardwalk casino, you’ll probably wind up just walking out the door and onto the beach. It’s convenient. But if you want a quieter, less crowded experience, I suggest heading south past the Tropicana to the beaches closest to Ventnor. Bartram Beach is an excellent choice. There are newly renovated bathrooms right there. And a little-known fact: Sack-o-Subs in Ventnor will deliver hoagies and cheesesteaks right there to the beach. Just mind the seagulls.

The Atlantic City Boardwalk can be kind of trashy (okay, that might be putting it mildly) in its busiest section, with lots of shops telling t-shirts you probably don’t want your kids to read. But north of Ocean Casino Resort, the boardwalk makes a left turn. This is the newish Atlantic City Boardwalk extension, a non-commercial stretch of boardwalk that’s lovely. There are great views across the water of Brigantine. You can watch anglers pulling up big ones (or at least attempting to) from the jetties. And when the tide is high and the ocean is rough, it’s fun to dodge the waves that inevitably crash onto the boardwalk.

As far as I know, there aren’t any bike shops in Atlantic City proper where you can rent bikes. But just south, in Ventnor (literally minutes from Atlantic City, on foot), AAAA Bike Shop rents bikes by the day for $15 — or you can grab one for the entire week for $75. Showboat also just installed an unmanned bike-rental kiosk on the Boardwalk. You download an app, put in your credit-card number, and rent a bike, though they don’t have options for smaller kids. Note that during summer, most sections of the Atlantic City Boardwalk allow biking only in the morning. 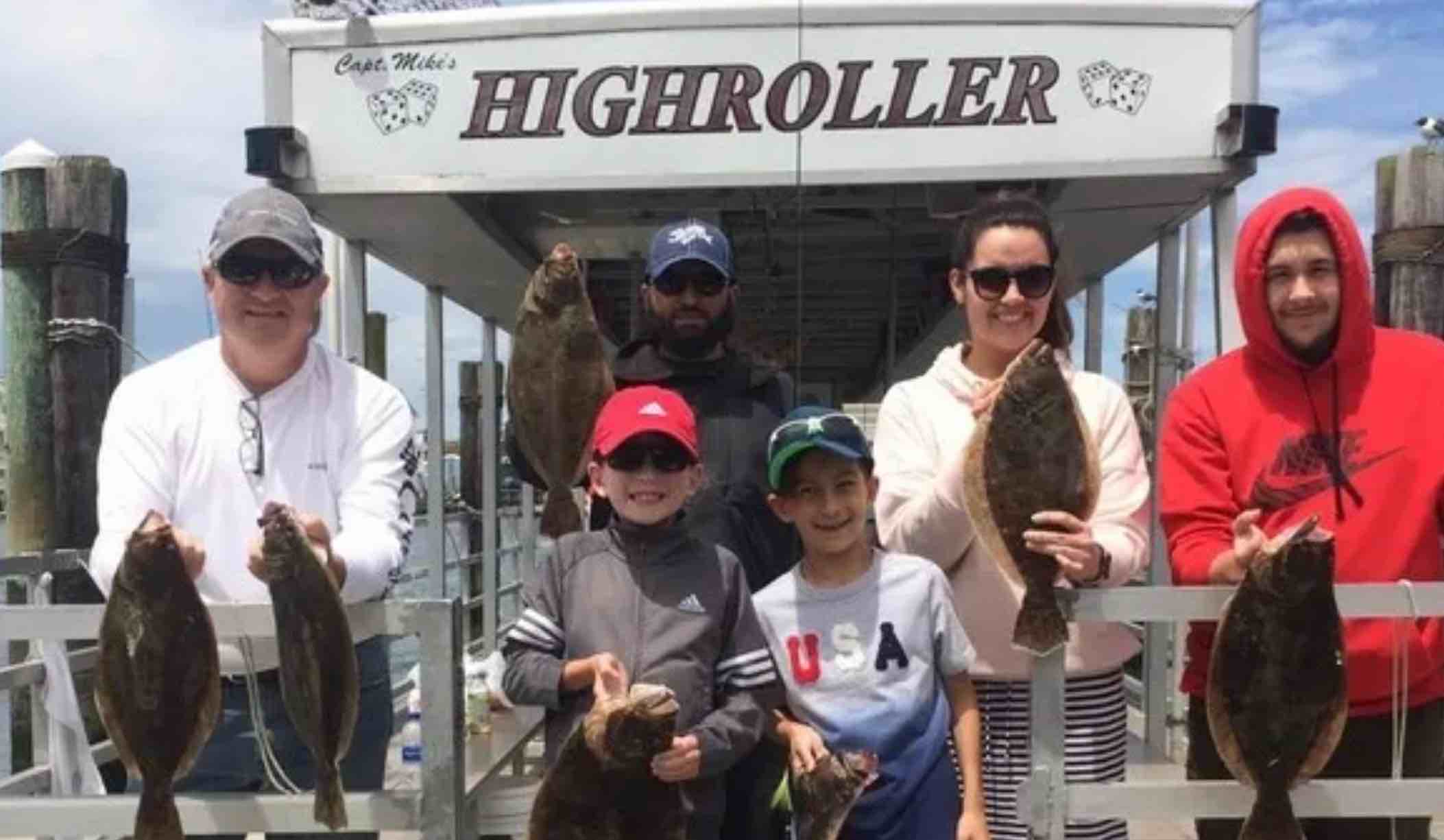 The most family-friendly way to catch fish in Atlantic City is on the Highroller, a boat that departs from the Gardner’s Basin area twice a day for four-hour trips. The Highroller stays in the back bay, which means it’s unlikely anyone will get seasick. You just literally drop the line (they provide the gear and bait and will even bait your hook for you) into the water, so you don’t have to worry about anybody getting snagged on a hook during casting. And the crew knows how to make sure the kids have a good time, though I’ve found that a nice tip at the beginning of the ride definitely encourages this. Yes, there’s a bathroom on the boat, but I personally suggest you empty all bladders before getting on board, because, you know, it’s a bathroom on a boat. 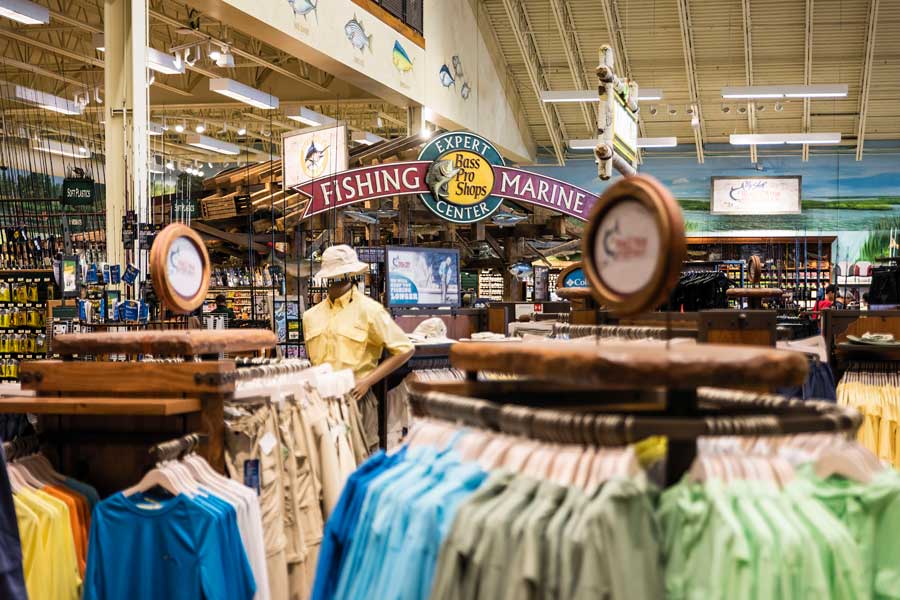 I know this one sounds crazy, but hear me out. Bass Pro Shops is a 85,000-square-foot bi-level outdoors store not far from the Boardwalk. They sell ATVs, which your kids are welcome to sit on. And you’ll be wanting to snap some cute photos of them when they do. There are also big boats to look at, as well as a replica of the largest striped bass ever caught in Atlantic City. And if your kids are into fishing, there are rows and rows of rods, lures, and all sorts of fishing gear you probably never knew existed. But the real attraction is the 13,000-gallon freshwater aquarium that features fish commonly found in New Jersey. Call the store ahead of time to find out what time they’re feeding the fish that day, because that’s when you’ll want to be there. (The real Atlantic City Aquarium still hadn’t reopened at the time of publication, but it’s a worthwhile rainy-day activity. And admission is free for kids three and under.) 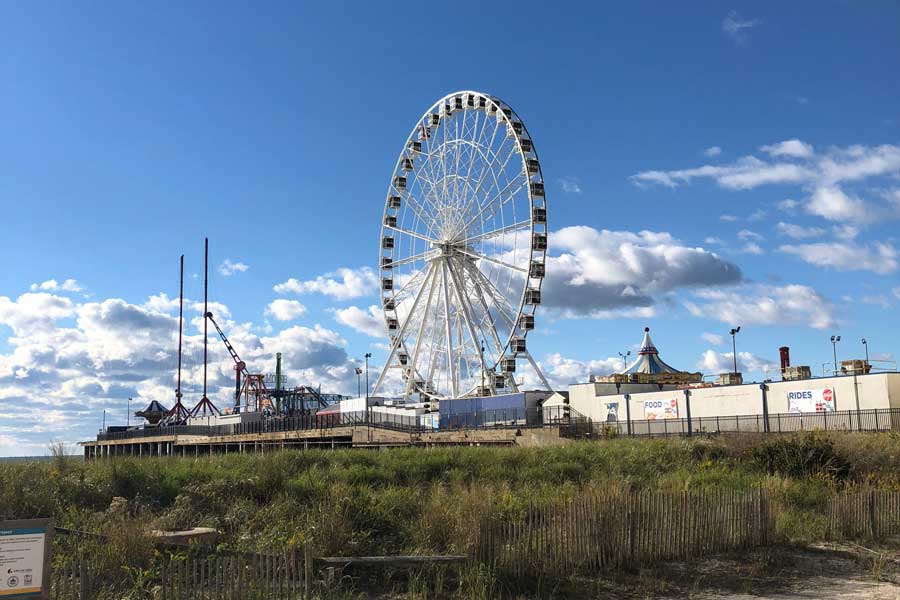 The Wheel at Steel Pier. Photo by Kealan Burke on Unsplash

Ride the Wheel at Steel Pier

There are plenty of activities for the kids at Steel Pier (including the swings, pictured at the top), but the best is the big Ferris wheel — known simply as The Wheel — which offers breathtaking views. It costs $9.99 (kids two and under are free) for the 15-minute ride, and this is money well spent. All of the gondolas are fully enclosed and climate controlled. 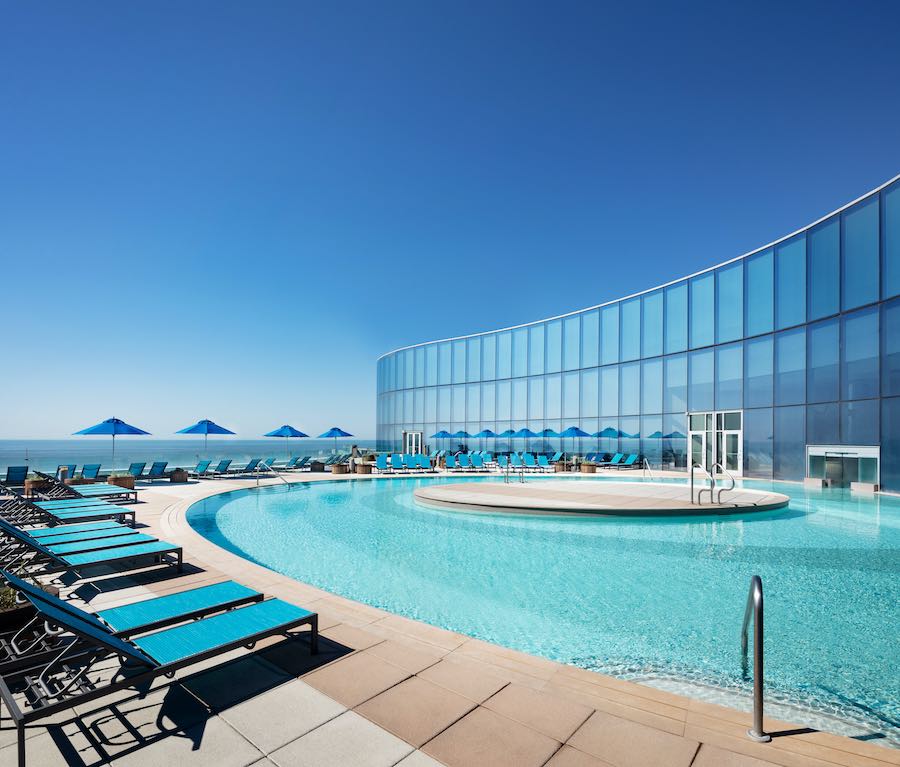 Go to the Pool

There are lots and lots of pools in Atlantic City. Some are downright sketchy. Some are indoors, which is great in the winter but not so much in the summer. And some are for adults only. My favorite for a family-friendly pool is the indoor-outdoor pool at Ocean Casino Resort. The pool is adult-swim from 8 a.m. until 9 a.m., but after that, kids are welcome. You’ll love the views of the Atlantic Ocean from your poolside chair. And there’s a restaurant and bar right there for poolside snacks (yes, they have chicken fingers for the picky kids) and drinks, so when it’s time for a piña colada, they have you covered. 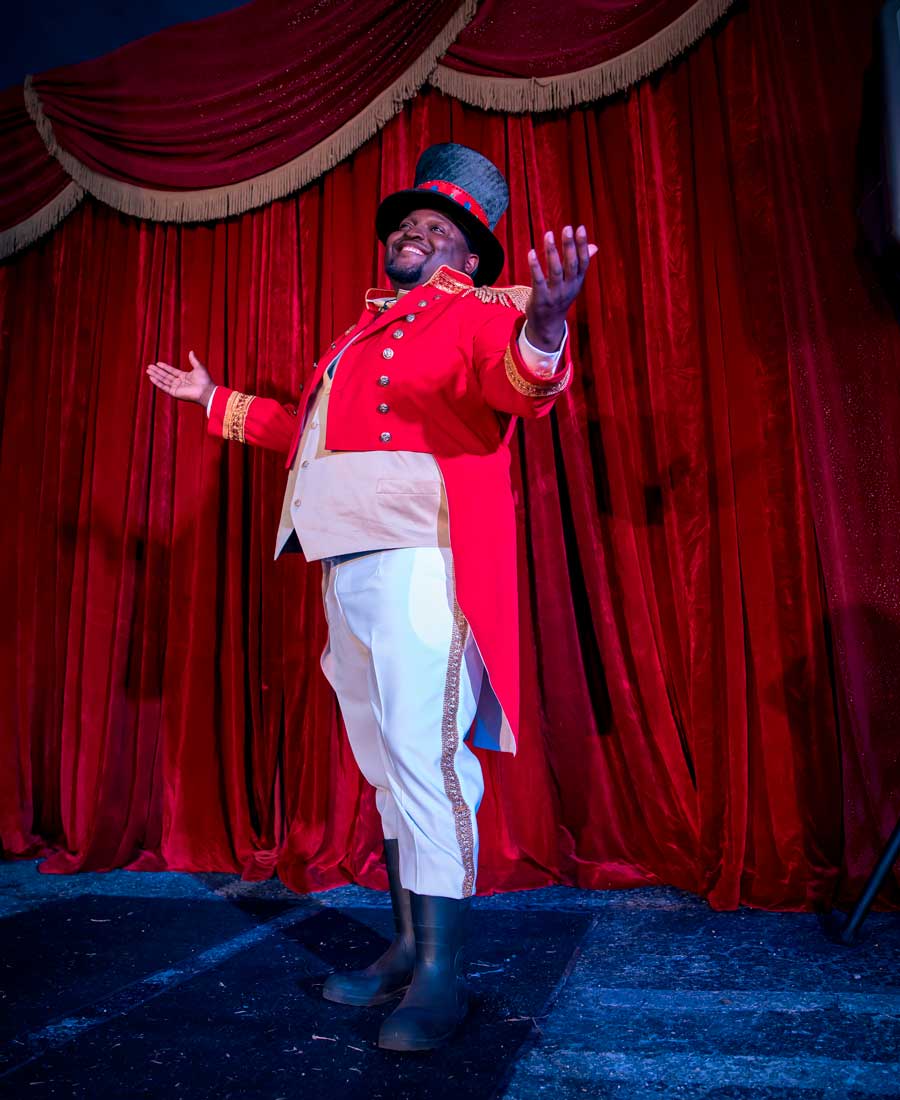 Check out the new circus outside of Showboat this summer. Photograph courtesy of Showboat

Seek Out Some Kid-Friendly Events

When you arrive in town, pick up a copy of the free Atlantic City Weekly newspaper, which does a good job of listing events, including things to do with kids. Good events for summer 2021 include the new circus under the big top outside of Showboat, running through Labor Day. The big Atlantic City air show returns on August 18th. If you’ve never sat on a beach looking at the ocean while F-16 fighter jets zoom by overhead (it can be a good science lesson in what breaking the sound barrier means) and paratroopers land on the sand in front of you, it’s definitely a one-of-a-kind experience.

No, he doesn’t have a website. Nor does he have any social media presence. But if you sit on the Atlantic City beach long enough, you’ll eventually hear a man bellowing those two beautiful words down the beach: “Ice cream … ice cream … ice cream … ” That man is Joey, and he’s quite the Atlantic City character, filled with stories about the good old days. Until a couple of years ago, Joey somehow managed to carry a heavy chest filled with dry ice and ice-cream products on his back. But as he’s getting a bit older, he now pushes a cart. Inside, you’ll find the coldest damn ice cream in Atlantic City — he actually warns you to wait a few minutes after unwrapping it so your tongue doesn’t get stuck — whether you want an ice-cream sandwich, a Fudgsicle, a Chipwich or a fruit bar.