The 103,000-square-foot Lucky Snake will debut on May 15th. Its amenities include the largest Pac-Man one can buy, boardwalk-style games, and a regulation boxing ring. But that’s not all. 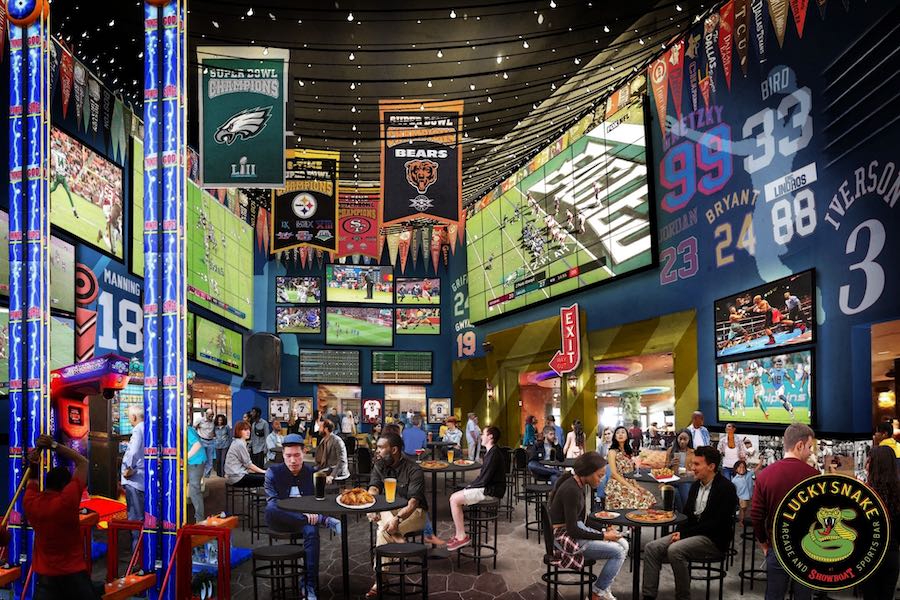 I spend much of the summer in Atlantic City with my family, and friends who know this frequently ask me for advice on what to do with their kids on a rainy day. It’s a very, very short list. But that’s all about to change thanks to the Lucky Snake, a 103,000-square-foot arcade inside Showboat that’s the brainchild of Philadelphia developer and Showboat owner Bart Blatstein.

The Lucky Snake, opening on May 15th, won’t be your typical Atlantic City arcade. Far from it.

The Lucky Snake will contain a sports bar and restaurant with huge TV screens. There’s the state-of-the-art online gamer annex, which Blatstein promises will have the “highest Internet speeds possible nationally.” At the arcade’s fully automated boardwalk-style games, you might win a trip for four to Hawaii, or a motorcycle (or, chances are, a stuffed animal). Virtual reality fan? Head to the VR parlor. Skee-ball? Yep. Mini-bowling? You bet. Those basketball games? Blatstein says not only will he have them — he’ll have “more basketball games than anybody.”

And what’s an Atlantic City arcade without a wide swath of arcade games? Blatstein says he’ll have them all, from vintage versions and pinball machines to the latest technology. And the Lucky Snake’s arcade game roster apparently isn’t large just in number, but also in physical dimensions, in some cases.

“My wife loves Pac-Man,” he explains. “So I bought the world’s largest Pac-Man that you can actually buy.”

Of course he did.

But all of that just wasn’t enough for Blatstein, who clearly thinks big. So he’s also sticking a regulation-size boxing ring in the middle of all of that. He plans to host real boxing matches and also to make the ring available for sparring and training, all while you’re sitting there eating a burger or watching a game or playing Mortal Kombat.

Blastein’s Atlantic City arcade is the first of several upcoming additions at Showboat, which he bought for $23 million in 2016. (Yes, he bought an oceanfront hotel, right on the boardwalk, for $23 million.) Around the time the Lucky Snake opens, Blatstein will break ground on an adjacent $100 million water park, scheduled to open in summer 2022. He’s also planning a 60,000-square-foot beer garden and a 60,000-square-foot music venue.

“I am going to have the first year-round family resort in Atlantic City,” Blatstein promises. “This is what it’s missing.”