Grab a blanket and catch al fresco showings of old favorites, Spider-Man in his many forms, and lots of Encanto.

By Laura Swartz and Patrick Rapa· 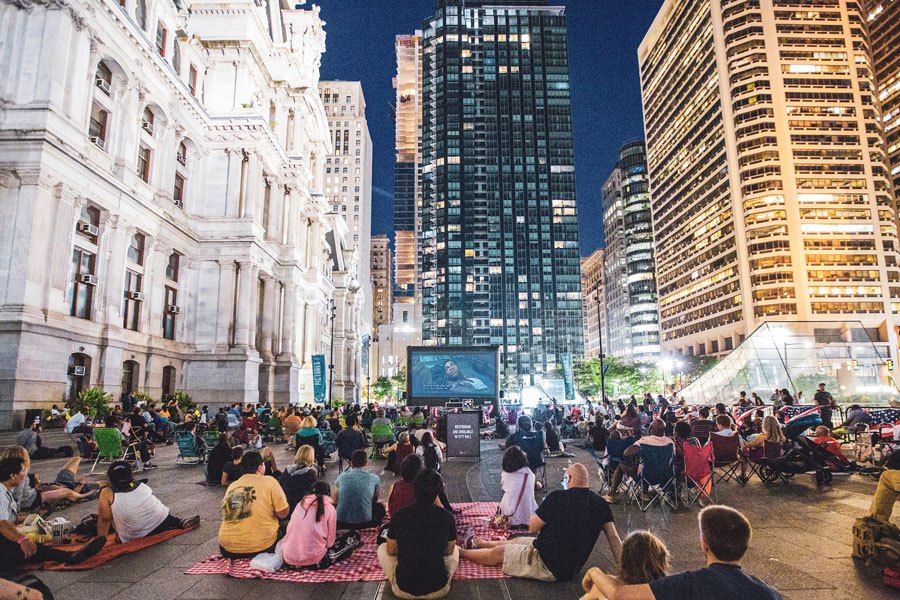 When it comes to free outdoor flicks, you have a lot of options this summer. Especially if you want to see Encanto — people are talking about Bruno all around town this season. So dust off your blanket, pack some snacks and find a sweet spot to sprawl out.

Schuylkill Banks Movie Nights
Thursdays, 8:30 p.m. Some screenings take place on Grays Ferry Crescent, while others will be just north of the Walnut Street Bridge. See schedule for details.

This popular Thursday-night series gets points for ambiance, setting up its big screen in a serene little spot near the Schuylkill River. Bring your own blanket and snacks, and come early to stake out your spot, watch the sunset, or take a riverboat cruise or kayak tour.

Ride the elevator to the top of the city, and gather on Cira Green for a free movie night with a view. Lawn games begin at 5 p.m., and movies begin at 6 p.m. Food and drink are available on site. Bonus: Come Saturday afternoons for cartoons on the big screen! The movies are announced monthly, so check their site for more of the lineup as it comes.

Bring your family, friends, blankets, and lawn chairs for family-friendly flicks around Mount Airy. Some locations are TBA so be sure to check their schedule as it gets closer.

Neighborhood parks all around the city will be transformed into outdoor movie theaters all summer long, with plenty of family-friendly picks (and lots of Encanto). Movies are BYOB (Bring Your Own Blanket) and begin at dusk. See below for the park-by-park schedule:

La Peg’s Wednesday-night movie series lets you sip a beer and watch an old favorite, plus play movie-themed quizzo! There’s on-site food and drinks, so no outside snacks are allowed.

Once the skating rink leaves on July 17th, the park plans even more free activities, including concerts and movie nights. Here’s the lineup:

On Friday nights in August, bring your own blankets and gather in West Philly’s main quad. This year’s movies all have music at their center.

2 More That Aren’t Free, But Are Worth It

Enjoy $8 admission (note that this series, unlike most, is not free), a tour of the Betsy Ross House, and a movie in the courtyard. Visitors are encouraged to arrive early, and bring food and a bottle of wine to watch the movie! The movies are all vintage sci-fi horror B-movies, and start after sundown, so they begin earlier in the night as the series goes on. Tickets available online.