REVIEW: In EgoPo’s Lydie Breeze, the Ghost of Utopia

Part I of John Guare’s monumental trilogy perplexes even as it makes us want more. 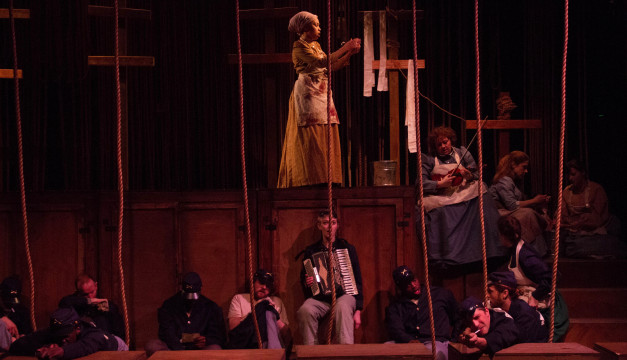 The cast of Lydie Breeze at EgoPo Classic Theater. (Photo by Dave Sarrafian)

“I love Walt Whitman!,” exclaims Lydie, midway through John Guare’s hugely ambitious, sometimes thrilling, occasionally confounding Cold Harbor, the first of a trilogy of plays collectively titled Lydie Breeze for their protagonist, presented here by EgoPo Classic Theater in a monumental undertaking. Whitman’s magisterial poem, On the Beach at Night, is also printed in the program.

Well, who better to invoke than Whitman in an elegiac panorama of the Civil War? Cold Harbor is that, at least in part. But it’s so much more—genre-defying, really. If it were fully a musical work (and in part it’s that, too – period folk songs are frequently sung and played by the gifted ensemble), I would describe it as poised between an opera and an oratorio, by which I mean it is simultaneously a character-driven dramatic piece, but also a melancholy poetic ode to the grand, brutal tapestry of history. Lydie, an army nurse from Nantucket, whose harrowing life experiences form the narrative, brings these two ideas together.

Or so it seemed at the beginning. But Cold Harbor turns out to contain multitude, including a focus on storytelling itself (a journal that Lydie’s keeps is the source for many key points). Before the play is over, it has also become a dark comedy, an adventure, and even a ghost story.

Not everyone will see that as a good thing; I’m not sure I do.

If you’re seeking a simple recommendation, you’ll have to look elsewhere. I’m still trying to figure out my own reaction to Cold Harbor. I found it inconsistent and often overloaded with plot points. On the other hand, too ambitious is far better than not ambitious enough, and there are many moments when Guare’s language, thematic ideas, and bravura sense of dramatic sweep are simply gorgeous. Part I of the trilogy perplexes, even as it makes us want more.

And Lydie herself is a fascinating creation—by turns nurturing and brash, a care-giver who is at the same time energized and made bigger than life by war and its consequences. In her life and loves, she is, one might say, very much the captain of her own ship. How audacious to have this complex female hero at the epicenter of a grand theatrical epic!

Guare playwriting voice is genuinely original, and at his best, a master theatrical orchestrator; there is certainly some of that here. Director Lane Savadove’s vision is also highly individual and intriguing, and the stage pictures are unfailingly beautiful. Among the cast, Charlie DelMarcelle, Victoria Goins, Ed Swidey, and Andrew J. Carroll particularly shine. Melanie Julian effectively channels Lydie’s earnestness, but not her inner fire.

Seen here, Cold Harbor is a stand-alone piece, but in the coming months, EgoPo will complete the trilogy—and perhaps the additional context will clarify some of the mysteries here. I’m particularly drawn in by the notion that Guare sets up near the end of this play—of a Utopian society that rises messily from a past full of pain and ghosts.

Cold Harbor / Lydie Breeze has performances through May 6, in a rotating cycle. For more information, visit the EgoPo Classic Theater website.