It's spring, and the city is in full bloom. Here's a list of where you can find the best flowering trees (and the best selfie backdrops) in April and beyond. 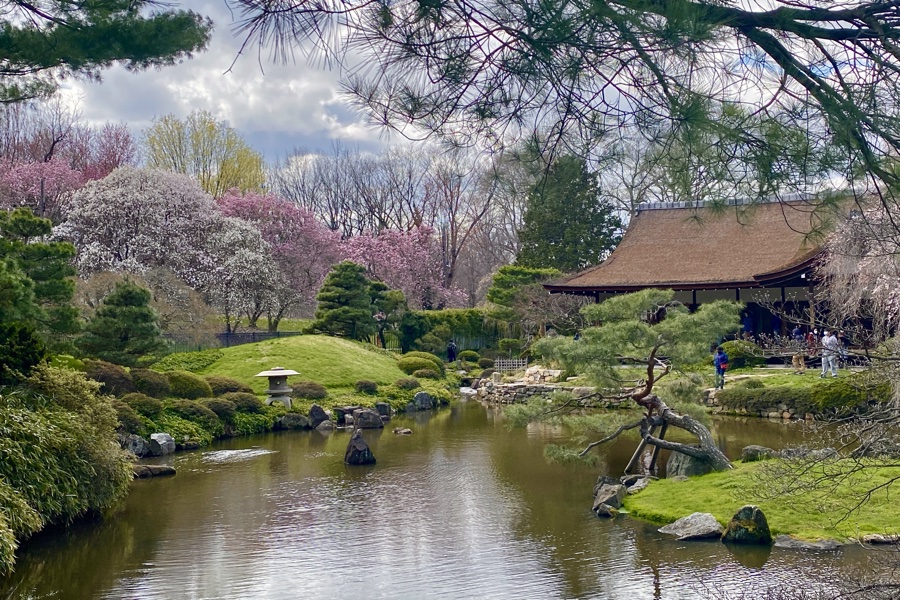 It’s time for cherry blossoms in Philadelphia, and Shofuso is the epicenter / Photograph by HughE Dillon

You don’t have to live in Washington, D.C. to experience the wonder of cherry blossoms. In 1926 Japan gifted 1,600 cherry trees to Philadelphia for the American Sesquicentennial, and they’ve been a symbol of friendship ever since. Over the years many more have been planted, especially in Fairmount Park. In 1933, Japanese residents of the region gifted 500 trees along Kelly Drive. And there are hundreds of cherry trees blooming right now along our streets. In this spring full of hope and renewal, here are a few of my favorite spots to enjoy their beauty:

One of the most popular spots to see the cherry trees is the Shofuso Japanese Cultural Center in Fairmount Park (above). Every year they hold a cherry blossom celebration timed around peak bloom. This year’s re-imagined festival is a weekend-long concert series at Fairmount Horticulture Center (below), rather than Shofuso, but you can still book tickets to visit the teahouse and gardens. 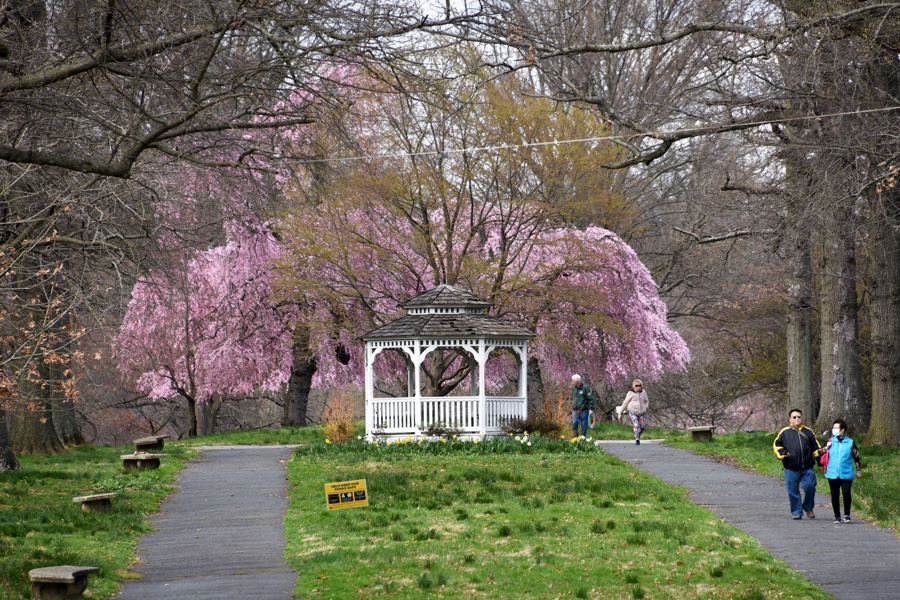 Walkable from Shofuso Japanese House and Garden, the Fairmount Park Horticulture Center (100 N. Horticultural Drive) features some 1,000 cherry trees, donated in 2003 by the Japan America Society of Greater Philadelphia. Its 27-acre grounds are open daily (except holidays) without charge. Now through April 10th, enjoy local beer and eats at Parks on Tap which has pop-up on the grounds. 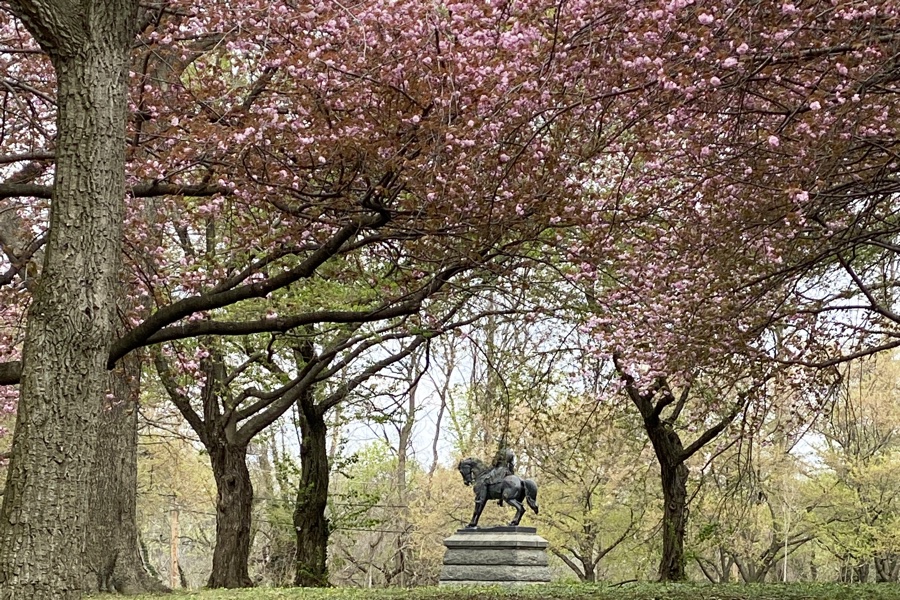 Starting at 4231 Avenue of the Republic, West Fairmount Park, you will spy many beautiful pink cherry blossoms as you bike or walk along the path past the General George G. Meade monument. 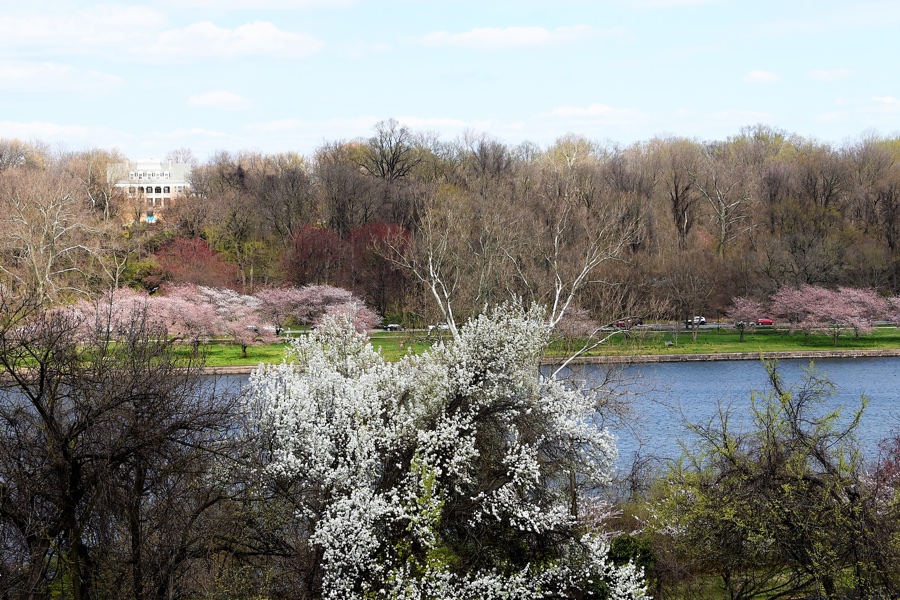 Is there anything better than rows of cherry blossoms along the Schuylkill River? Grab your picnic basket and dine among the blooming trees on Kelly Drive between Boathouse Row and Girard Avenue. The stunning trees will take your breath away from either side of the river. 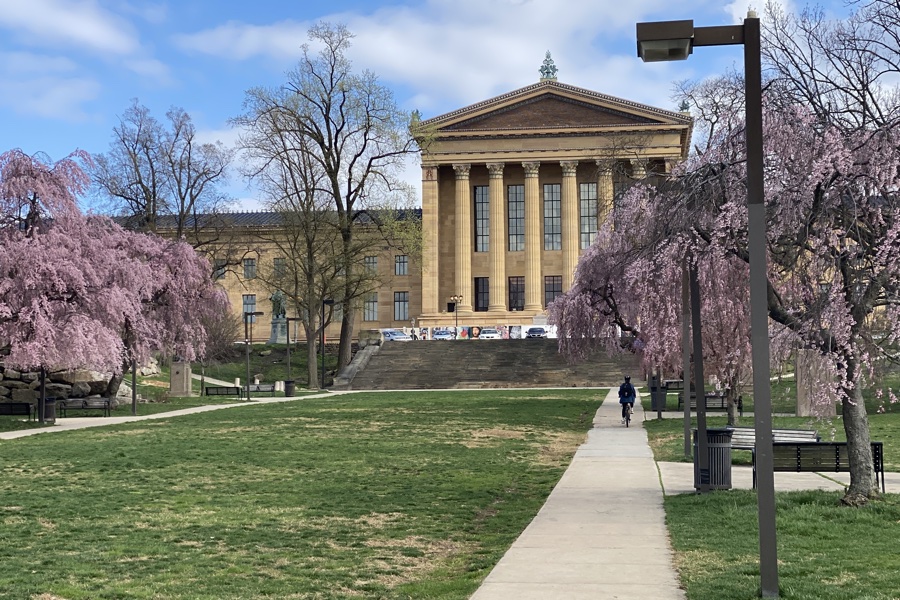 There are dozens of cherry trees around the grounds of the Philadelphia Museum of Art. But make sure to head toward the the building’s West Entrance to see some blooming trees there and near the Fairmount Water Works. 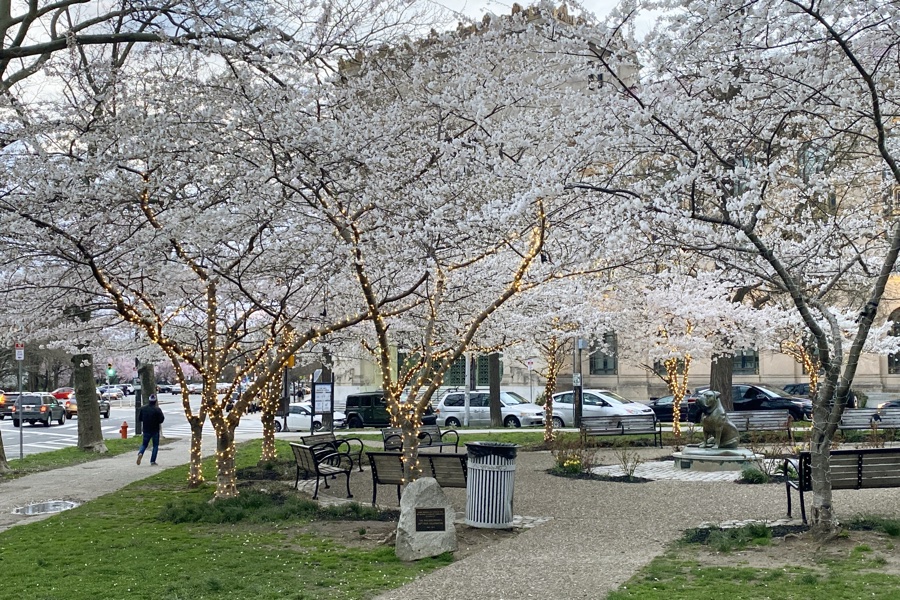 Across the street from the Art Museum is tiny Bulldog Park which is ringed by beautiful Yoshino cherry trees. Grab a bench and enjoy the bountiful blooms overhead. 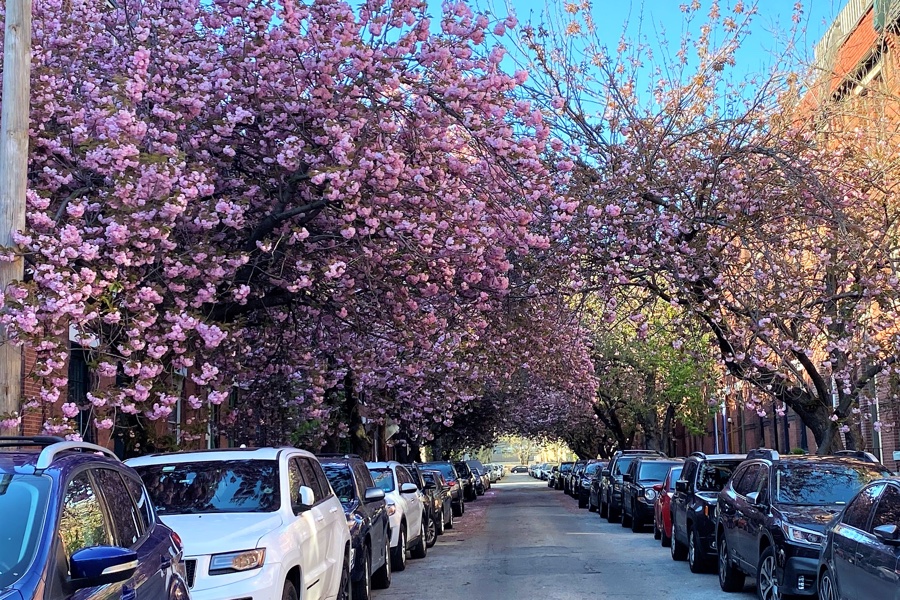 Probably the most Instagrammed street in Philly (this time of year at least) is the 800 block of N. 21st Street in Fairmount. On the first day of spring, people on social media post photos of this block to celebrate the day, but the street doesn’t actually bloom until a few weeks later, usually the second full week of April. So you still have time to grab a selfie under the canopy of magnolia trees. 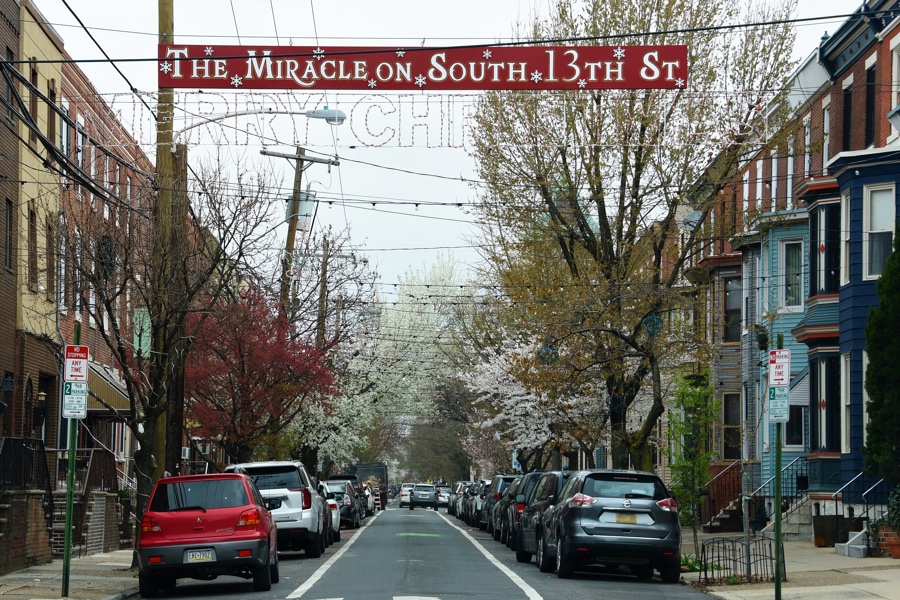 The holiday light display on the 1600 block of S. 13th Street isn’t the only spectacular sight here. In springtime the street bursts with beautiful blooms from all sorts of arbor, including, cherry, dogwood and maple. 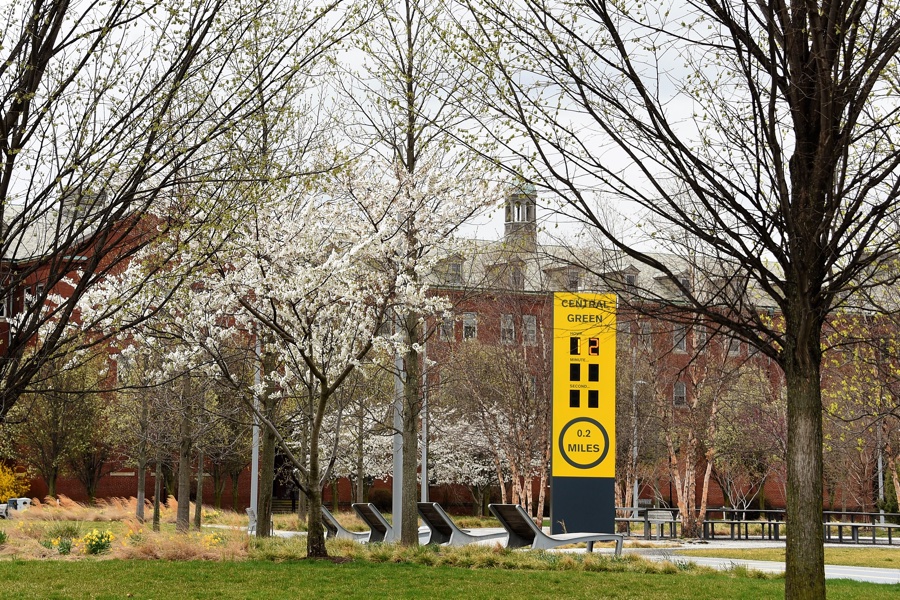 Did you know the Navy Yard has received Level I arboretum accreditation from Arbnet, a global network for tree-focused professionals? The Navy Yard is one of six arboreta in Philadelphia (Awbury Arboretum, Bartram’s Garden, Centennial Arboretum, the Horticulture Center, Morris Arboretum). While many flowering trees can be found throughout the grounds, my favorite spot is Central Green where you can sit and enjoy the beauty while watching airplanes make their final approach to Philadelphia International nearby. 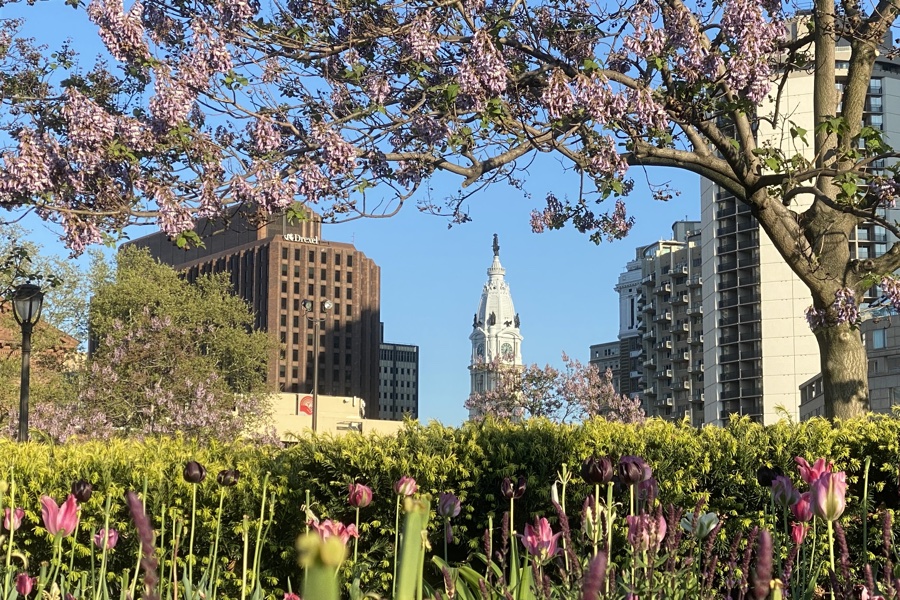 Blooming tree season in Philly extends past April, as Logan Circle’s paulownia trees don’t bloom until the first week of May, or about two weeks after the blooms are off the cherry trees. A hardy species, you will also see many blooming paulownia poking above the houses if you ride the El to Frankford. You’ll also find some near the Independence Park historic area. 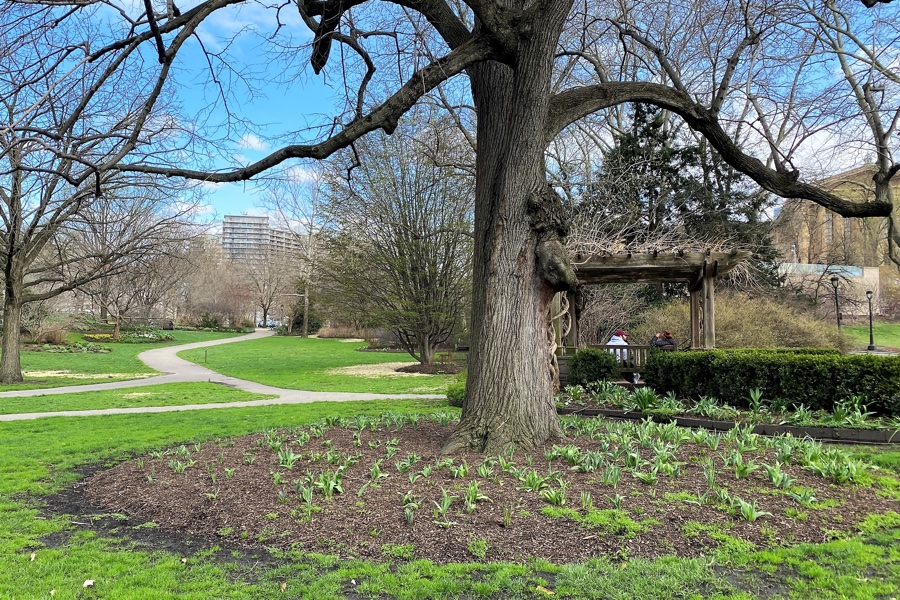 Azalea Garden behind the Art Museum

After the cherry blossoms are finished for the season, there’s yet another beautiful blooming spot to visit in Philly: the Azalea Garden, which peaks in the first two weeks of May. Located on Kelly Drive between Boathouse Row and the Philadelphia Museum of Art, the garden’s flowering trees (dogwood, apple) and azaleas are in bloom everywhere starting in late April and continuing for most of May.