REVIEW: With Madaket Road, a Long, Intriguing Journey Comes to a Close 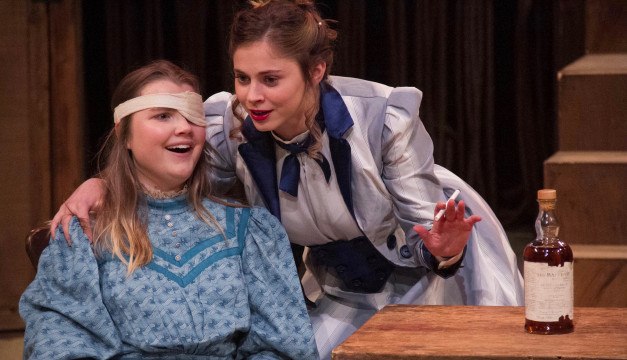 And so, the journey ends. In Lydie Breeze—a deeply ambitious trilogy of plays by the formidable John Guare, presented here at EgoPo with palpable love and considerable vision by director Lane Savadove—

we’ve set sail with Lydie and crew, en route to new lives and a new world. We’ve seen them fight in the Civil War, forging partnerships as they dream of creating a Utopian community in Nantucket (that’s Cold Harbor, part I). We’ve watched with dimming hopes as that idyllic dream fades amidst personal and legal entanglements (Aipotu, part II). Finally, in Madaket Road(part III), time continues to take its toll. The vibrant Lydie is now only an apparition; life is left to a new generation, who will make of it what they will.

This is vast terrain, of course—geographic and human—and it’s fitting that Guare, a master-stylist, portrays it in a broad palette of colors. Cold Harbor is a thrillingly odd adventure story, peppered with unexpected elements of magic. Aipotu, the most accessible play of the three, is also the most realistic and character-based, full of grim reckonings.

Madaket Road is yet another detour. As in Cold Harbor, Guare moves away from realism, but the tone of Madaket Road is quite different—often akin to a mysterious, densely-layered gothic novel. With Lydie herself only occasionally participating from the world beyond, a number of characters previously seen only in supporting roles, or entirely new, now come to the fore. Among the most important are Gussie (played by Kristie Ecke), Lydie’s brash older daughter, who is ambitiously climbing her way into relations with political “players;” and Jeremiah (Grant Struble), a handsome British stranger who holds secrets about the Breeze-Hickman family, and seems primed to simultaneously make peace and exact revenge.

Much of Madaket Road is gripping and moving, though a number of themes and tropes that clearly have deep resonance for Guare didn’t add up for me. On the one hand, it’s frustrating that the central players—whose story we’ve faithfully followed through two plays—are marginalized here.

On the other hand, isn’t that what life is fundamentally about? As one generation moves on, the next takes over. The final image—Lydie’s young daughter, who shares her name, just coming into womanhood—is a real lump-in-your-throat moment. Actress Kylie Westerbeck gives a beautifully nuanced performance as the young Lydie. Ecke and Struble also have their moments, and Charlie DelMarcelle (as Joshua Hickman, Lydie’s sometime-husband) and Melanie Julian (as Lydie herself) are accomplished, as they have been throughout the cycle.

I’ve seen the three Lydie plays at each of their opening night performances, which has the advantage of allowing me to process them over time. EgoPo’s production now moves into a phase of marathon performances, where audiences can see the cycle on consecutive evenings, or even in a single day—which may make the details and character connections leap out more clearly.

However you see Lydie, I think you’ll be swept up. This has been a monumental undertaking by Guare, Savadove, and company, effectively rethinking and restoring to the canon a major work that was unfairly dismissed nearly 40 years ago. Hat’s off to EgoPo… and I’m ready to set sail with them on their next voyage, whatever it may be.