REVIEW: In John Guare’s Aipotu, Utopia Ain’t What it’s Cracked Up to Be

Part II of the Lydie Breeze Trilogy is linear, concise, and better than Part I. 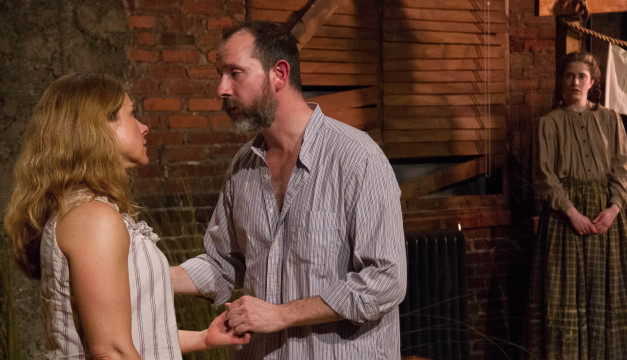 When we last saw army nurse Lydie Breeze — in Cold Harbor, the first play of John Guare’s trilogy that bears her name — she and her cohort were trekking through the Civil War by ship and on foot, meeting adventures and personal complications all along the way. Now, the second play, Aipotu, finds her at home in Nantucket, married to Joshua, who dreams of writing important works, and with their daughter who is also called Lydie. By Civil War standards, they’ve been luckier than many — surviving catastrophes, whole in body and mind, and living where they hope to set up a utopian community.

Alas, utopia ain’t what it’s cracked up to be. (“Aipotu” is “utopia” backward — in many senses, as Guare reminds us).

For starters, Lydie and Joshua aren’t alone. Amos, a wartime friend who is struggling to get his life together, is there with them. So is Dan Grady, Lydie’s lover. Nothing goes easily for the group, who will be challenged throughout with unexpected reversals. Even the beloved gardenia plant has shriveled and died. No wonder Lydie fantasizes that she will “sail out of Nantucket on the River Styx.”

Audiences who struggled with the fascinating but sprawling and not always comprehensible Cold Harbor — as well as those who missed the first part — will want to know that Aipotu makes sense on its own. The early history provided by the first play makes some of this one more poignant, but’s not necessary to understand it.

Also, Aipotu is more linear, concise, direct— and to my mind, better. I’m still trying to reconcile the polarities of Guare’s play. On the one hand, it’s a poetic elegy about idealism after a devastating war; and on the other, a melodrama full of twists and turns. But his flavorful dialogue gives the historical setting an appealingly contemporary, mordent snap, and much of the writing and imagery are beautiful.

EgoPo continues to serve these plays well. Melanie Julian is an effectively feisty Lydie. Charlie DelMarcelle is superb and heartrending as Joshua, and there’s excellent support by Ed Swidey (Amos), David Girard (Dan Grady), and others. Lane Savadove directs with his familiar sensitivity and visual panache— if this were a film, one might say of it that every frame is a memorable picture.

But I question the choice to reconfigure the theater space between the show’s two acts, requiring a 40-minute break and considerable fussing. Lydie ensemble performers fill the interval with music, much of which is delightful. And I appreciate Savadove’s efforts to change our perspective (as indeed the plays themselves do in an on-going way). But there is also some suspense and intrigue built into Aipotu, which is significantly dispelled here by the mood-breaking delay.

Next up — Home, the third and final Lydie play. I for one am eager to see what happens.

Aipotu plays through March 18, and as part of Lydie Breeze trilogy marathon performances, through May 6. For more information, visit the EgoPo Classic Theatre website.