PREVIEW: At EgoPo Classic Theater, Two Worlds Meet in Desire Under the Elms

An important but rarely produced American play gets a reboot from a South African company. 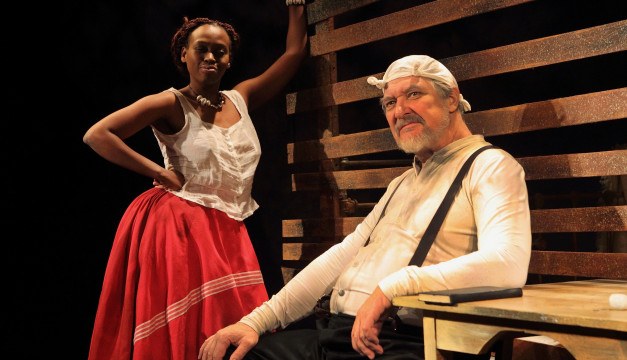 Mbali Bloom and Robin Smith in Desire Under the Elms, coming to EgoPo. (Photo by Pat Bromilow Downing)

Even by EgoPo Classic Theater’s bold standards, what they’re about to do is out of the box. To begin a season devoted to “Theater of South Africa,” artistic director Lane Savadove has invited a South African production of an American play.

What’s more, that play is simultaneously major and likely to be unfamiliar. The author is Eugene O’Neill, at or close to the top of nearly every critics’ list of great playwrights. But Desire Under the Elmsitself is infrequently performed: the last Broadway revival in 2009 was also the first in nearly 60 years.

In fact, Desire was written long before that—in 1924, when it represented a significant shift for O’Neill. Constructed in three acts but taut and relatively brief (90 minutes, no intermission here), it’s a saga of illicit and deadly relationships that play out on a New England family farm, drawing from Greek tragedy (especially Euripides’ Hippolytus) as well as a post-Freudian sense of psychopathology.

Desire packs a wallop. It’s a flawed work for sure, but an important one, perhaps most of all because many elements of it pave the way for the unwieldy but powerful Mourning Becomes Electra, written seven years later, which surely was O’Neill’s magnum opus at least till the great plays that closed out his career (Long Day’s Journey into Night, The Iceman Cometh).

The version coming here resets the action to the Eastern Cape of South Africa, adding new layers to Desire’s politics. As Savadove explains, “I saw this moving production at the Provincetown Theater Festival two years ago and had the pleasure of meeting the company. I was incredibly impressed by their bold vision and powerful performances. As EgoPo’s South African season came together, I was thrilled to be able to partner with Drexel to invite Abrahamse and Meyers Productions to present this beautiful interpretation in Philly.”

It seems an ideal kick-off for what promises to be a fascinatingly wide-ranging season, featuring plays by Pumla Gobodo-Madikizela, Athol Fugard, and others.

This event is also a touching reminder that a little over a decade ago, Savadove and EgoPo were themselves visitors to Philadelphia. The company, then based in New Orleans, was performing at the Philadelphia Fringe Festival when Hurricane Katrina essentially left them homeless. The welcome they received from the local theater community resulted in EgoPo moving here, where it has enriched our arts scene ever since.

Despite shrill counter-arguments on a national scale, it should be clear to all that cultural immigration makes our theater stronger.

Desire Under the Elms has performances October 4 through 7. For more information, visit the EgoPo Classic Theatre website.