A Look Around the Finished, Amenity-Rich 2100 Hamilton

The new condo, which just opened behind the Rodin Museum, has only 10 stories. But the first and 10th are knockouts — or the 10th will be, once someone buys it. 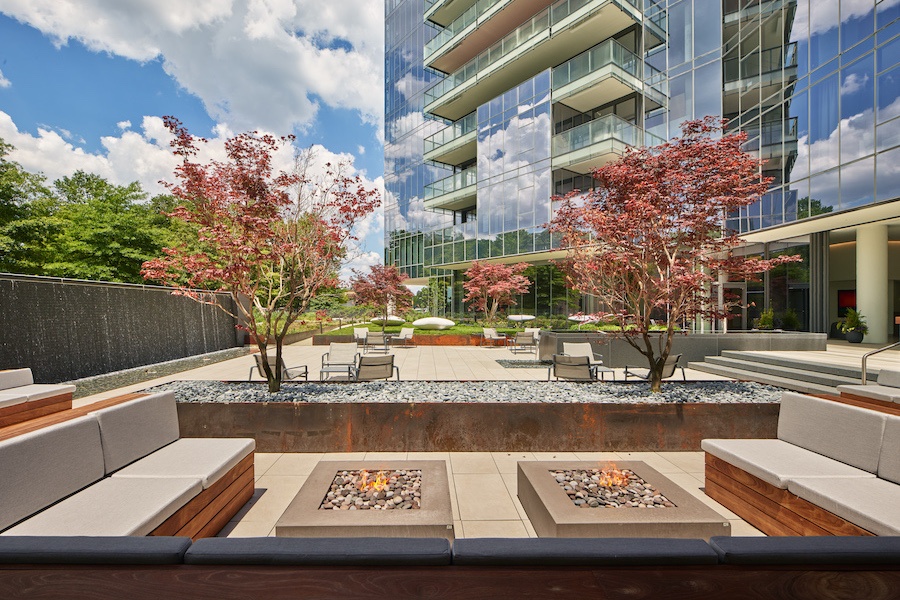 Cherry trees add a splash of color to 2100 Hamilton’s half-acre amenity terrace and garden. The outdoor space is the largest of its kind in the city, says builder Bock Development Group. | This and all other photos; Halkin Mason Photography unless otherwise noted; renderings: Bock Development Group

The Rodin Museum’s new next-door neighbor to its north threw open its doors to its first residents two months ago.

And there were plenty of residents walking through those doors: when the 2100 Hamilton opening took place on June 1st, more than 65 percent of its 27 condominium units had been sold. That percentage has risen since to 70, according to developer Bock Development Group.

One of the unsold units is the 5,256-square-foot, full-floor penthouse unit on the top floor. Right now, it remains raw space, waiting for its buyer and their architect and designer to outfit it to suit their dreams. These renderings show what’s possible: 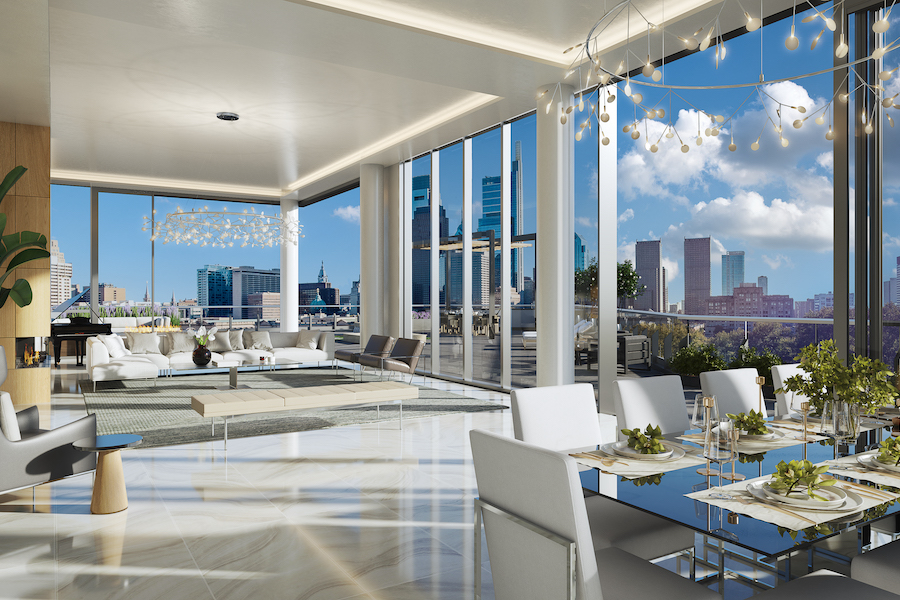 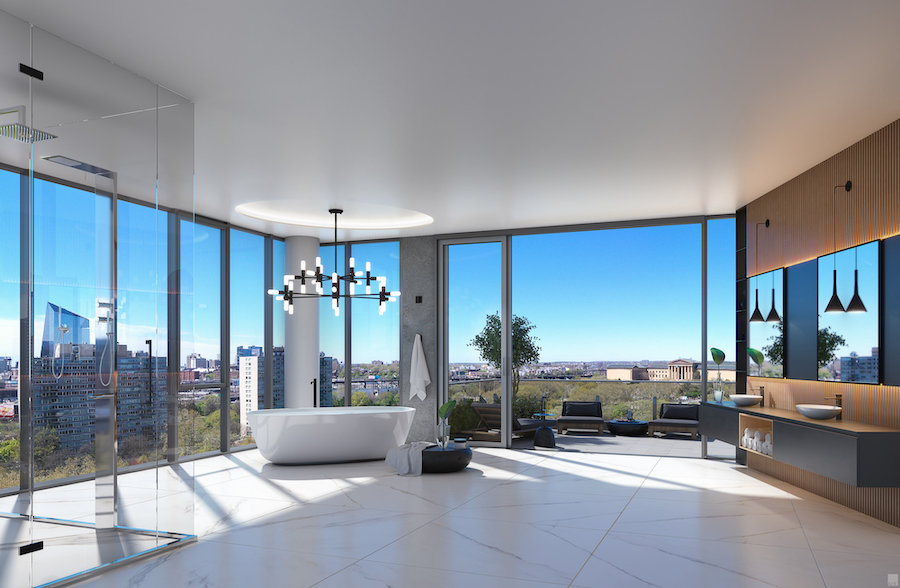 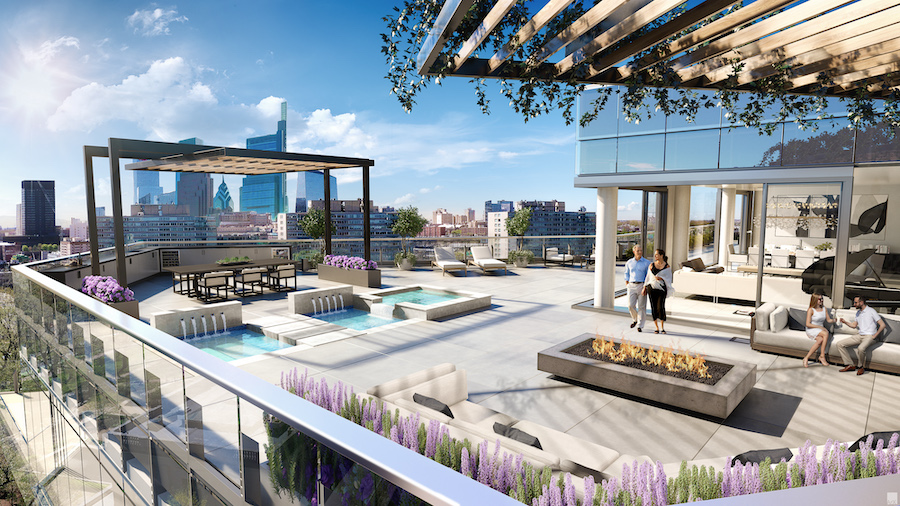 And this photo shows you what you can see from that 3,700-square-foot outdoor terrace:

Need Inspiration for Your New 2100 Hamilton Condo? Take A Look at This Model Unit 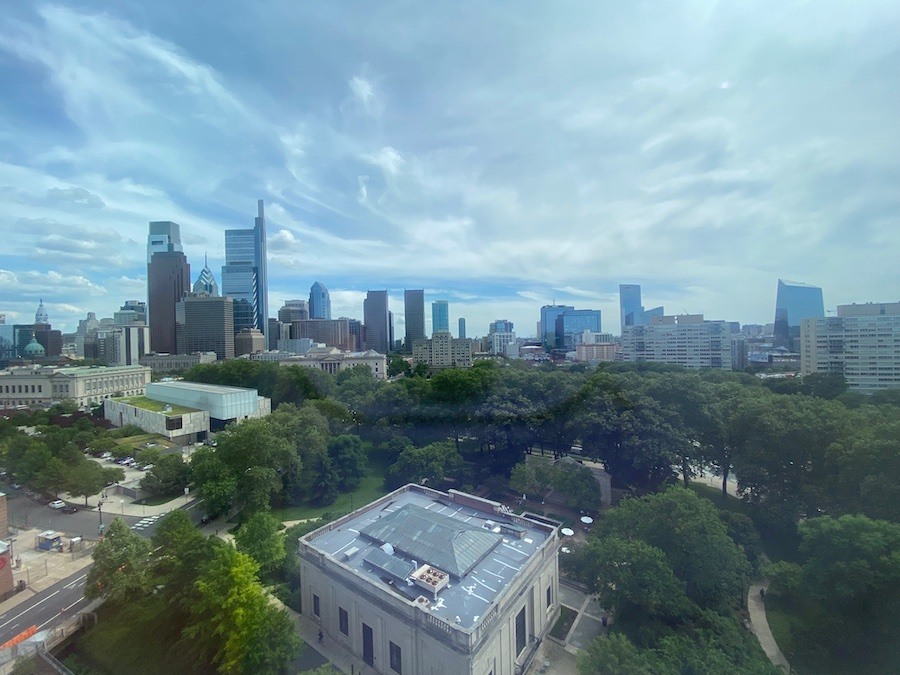 The penthouse even has provision for a private elevator leading to the roof, where a roof deck can be added.

Given this, one might assume that the penthouse’s owner would have no need to take advantage of 2100’s amenity spaces, especially since that huge terrace can be equipped with just about every one of the amenities contained on the street level. I’d like to suggest that assumption is wrong, especially when architect Cecil Baker + Partners and landscape architect Sikora Wells Appel have given this tower-in-a-park a very nice private park on its ground floor. Bock Development says the amenity deck and garden is the largest in the city.

We ran renderings of what the amenity deck and garden would look like back when the building was topped off in the fall of 2020. The finished product pretty much matches those renderings, and that should make this space just as appealing to the penthouse-dweller as to those living in the less exalted units below it. 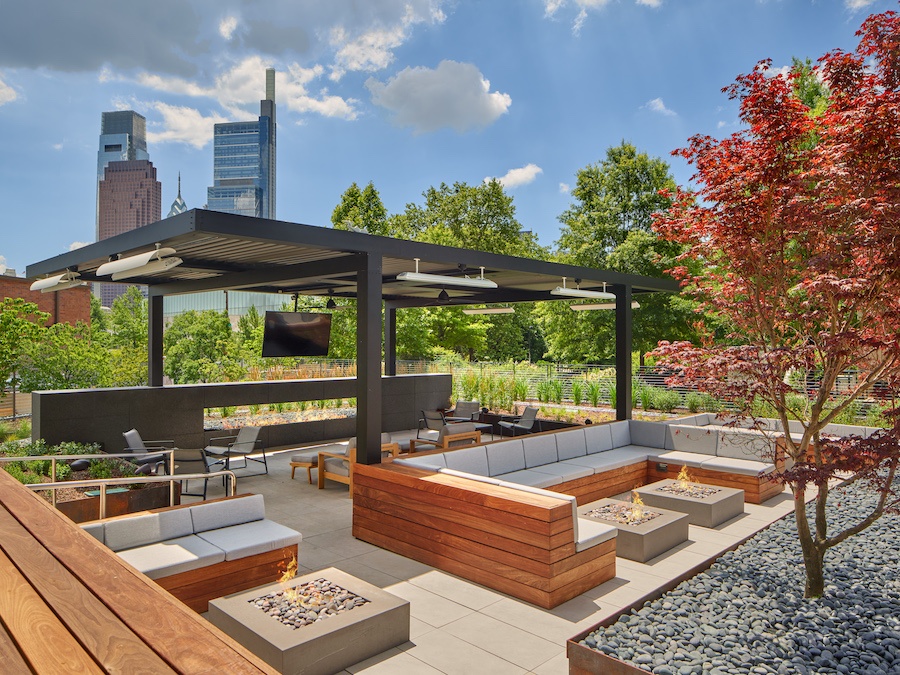 While the penthouse owner will be able to install an outdoor kitchen, fire pits and plants on their terrace, they might still want to hang out with their neighbors in the all-weather pergola every so often. There, they can also grill and do things like cheer on the Eagles/Phillies/Sixers/Flyers/Union or watch movies on the big-screen TV over the fireplace and under cover. 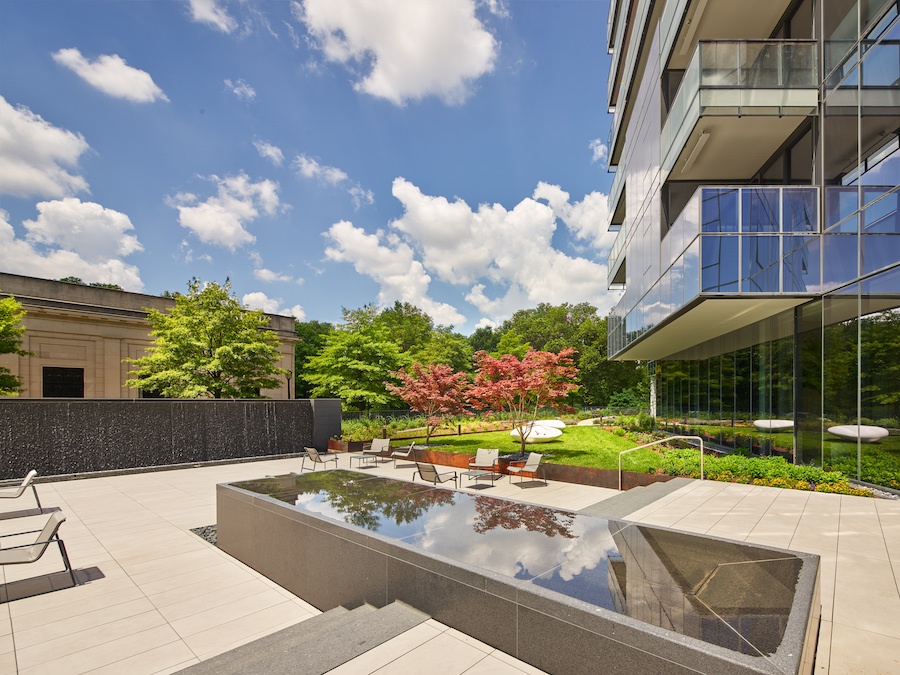 And while they can also install fountains and pools on their terrace, they can’t put in a granite reflecting pool and 40-foot waterfall with fire features. 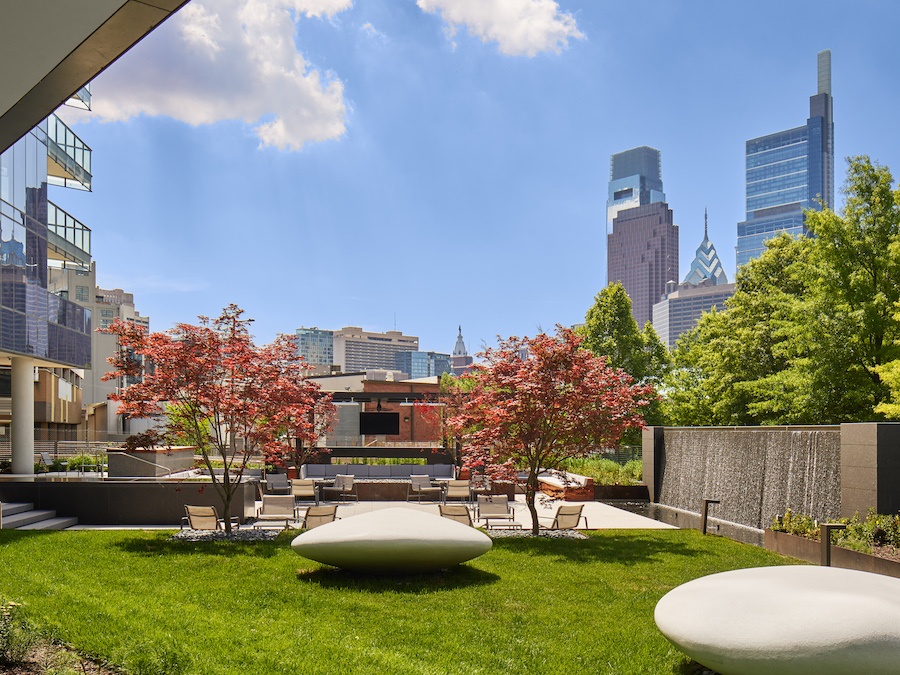 View of amenity terrace from garden

Nor will their greenery be able to duplicate the landscaped lawn and garden on the amenity deck.

The amenities on the inside of the ground floor are just as alluring. 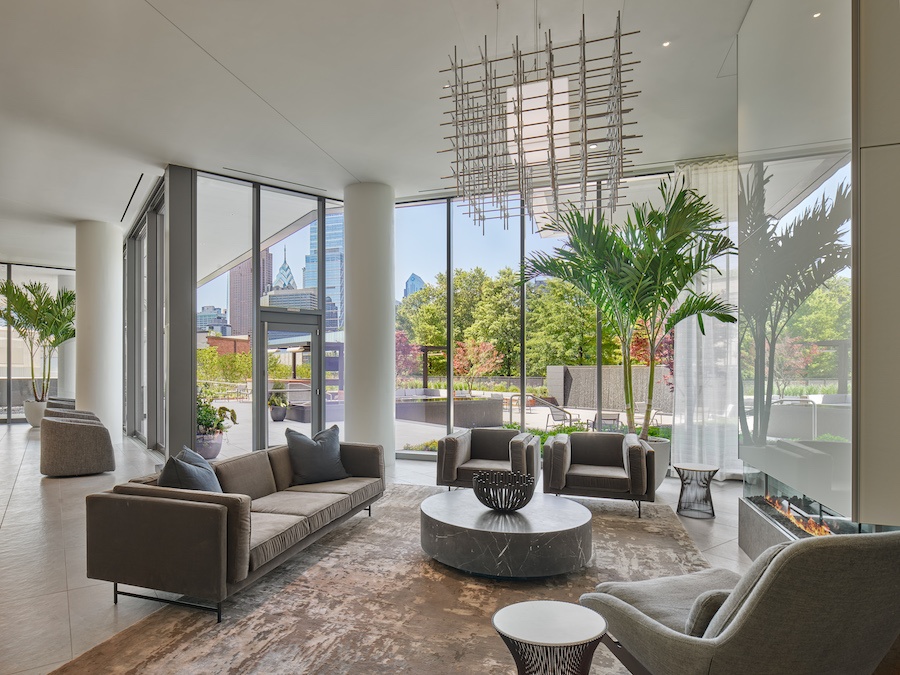 Next to the amenity deck is a stylish lobby lounge. 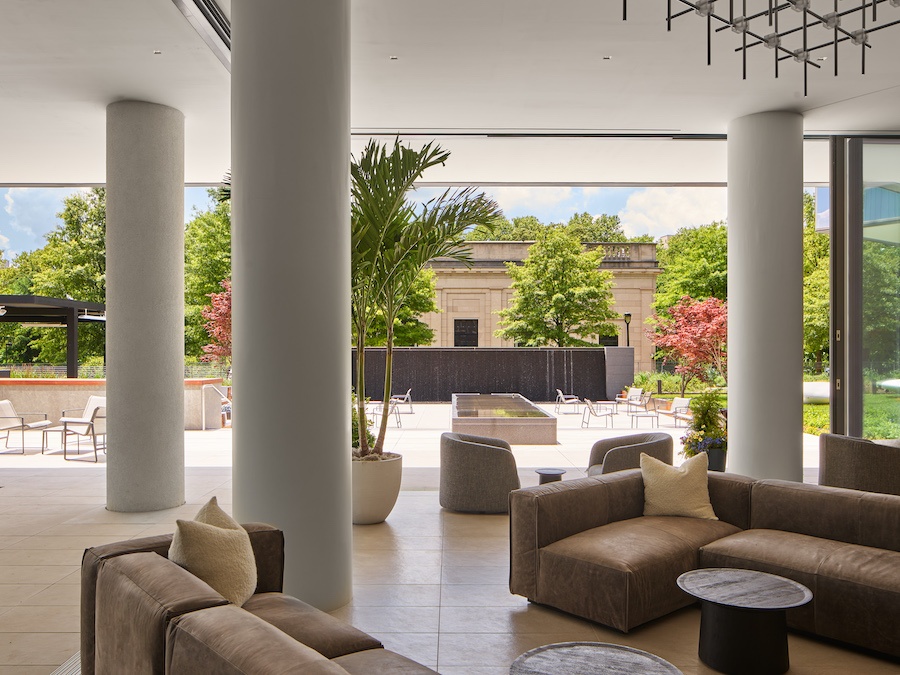 And like the electronically controlled retractable doors that open the penthouse up to its terrace, this lounge has identical doors that make it one with the amenity deck. 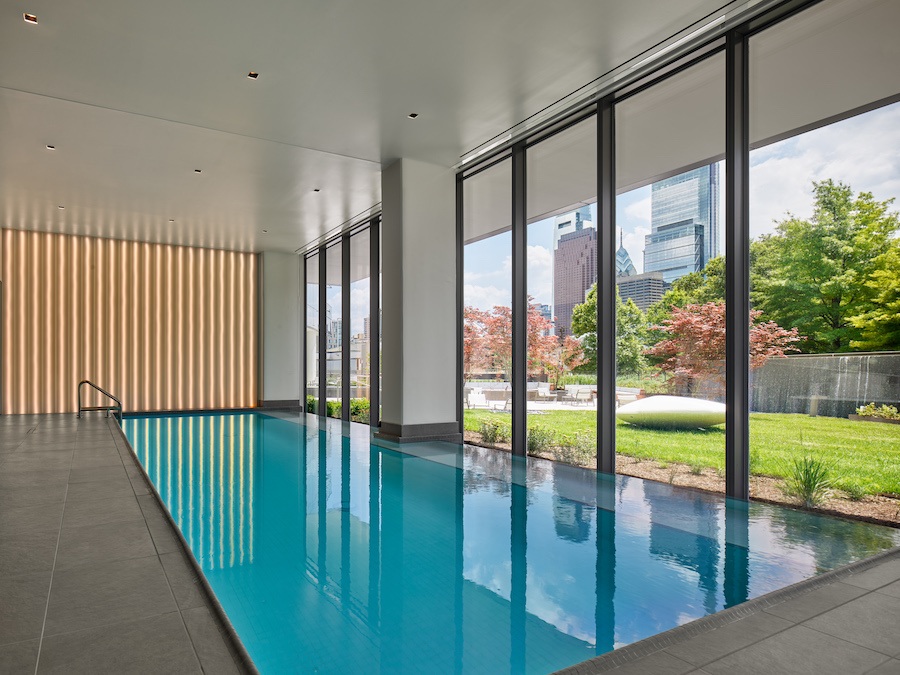 The pool, on the other hand, is completely separate from the garden but has full-height windows that look out on it. 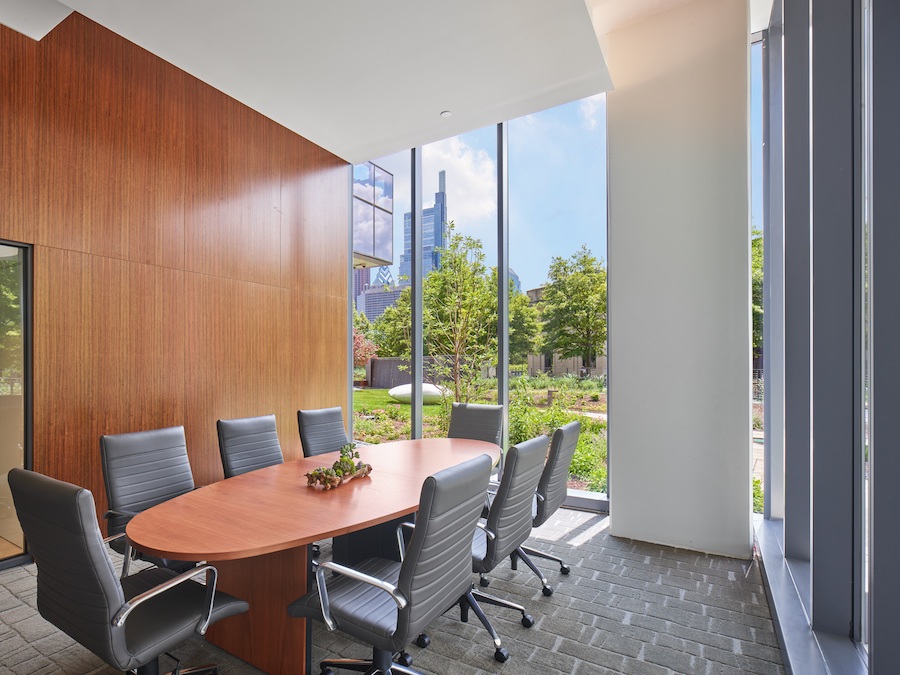 As do the windows on two sides of the conference room at the building’s southwest corner.

The ground floor also contains an event space with a catering kitchen, and the building also makes a guest suite available to its condo owners. (The penthouse owner, however, has so much space in their unit that they could put in their own guest suite.)

The only amenity not located on the main floor is the building’s fitness center, which is located in the basement. The basement corridor incorporates the stone retaining wall of the former City Branch railroad trench, over which its amenity deck hangs. That overhang, however, was designed so that natural light can continue to pour onto the former railroad right-of-way, leaving open the possibility of converting it into a sunken park in the future.

Other amenities include a 24-hour concierge, valet parking in an underground garage and use of a town car. The elevators, which take owners directly to their units instead of hallways, are outfitted for completely touchless operation — an adaptation to the COVID era that will also prove valuable as monkey pox spreads through the population.

“The completed product has exceeded my expectations, and I truly believe it offers the best of luxury living in Philadelphia,” says Tom Bock, founder and president of Bock Development Group and president of Ernest Bock & Sons Construction, in a news release announcing the grand opening. “With defining elements you won’t find anywhere else in the city, including the amazing views, to the largest private residential garden, and having the prestigious Rodin Museum and Barnes Foundation as neighbors, we’ve created a place our residents can be excited to now call home.”

If you would like to call that penthouse home, all it will set you back is $16 million, not including the cost of fitting it out. Other units in the condo range in size from 1,736 to more than 3,300 square feet and start at $2.25 million. More information is available at the 2100 Hamilton website. Appointments are required to visit the on-site sales center or tour the model unit; to schedule an appointment, call 267-903-2100.