Designed for the COVID-19 era, the new tower offers contactless elevators in addition to spacious community gathering places. And it won't fry the Rodin Museum either. 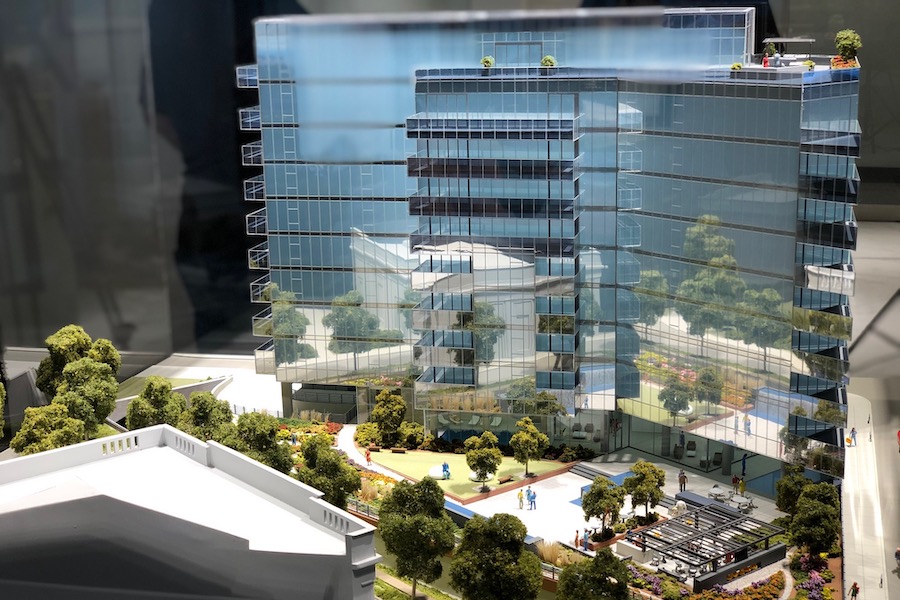 This model of 2100 Hamilton shows its relation to the Rodin Museum and its amenity deck over the City Branch trench. | Photos and renderings: Bock Development Group

Now that Bock Development Group has formally topped off 2100 Hamilton, the luxury condo it’s building at that address in Logan Square, it’s time to take a look at how the project came together and fits in with its neighbors.

Especially the neighbors to its immediate south.

The good news is, the 10-story condominium tower is going to get along very nicely with the Rodin Museum, and it hasn’t completely closed off the possibility of a park and trail under its amenity deck.

Inquirer architecture critic Inga Saffron pointed out that both issues were concerns as the Cecil Baker-designed, almost-all-glass tower was making its way through Municipal Art Commission review. 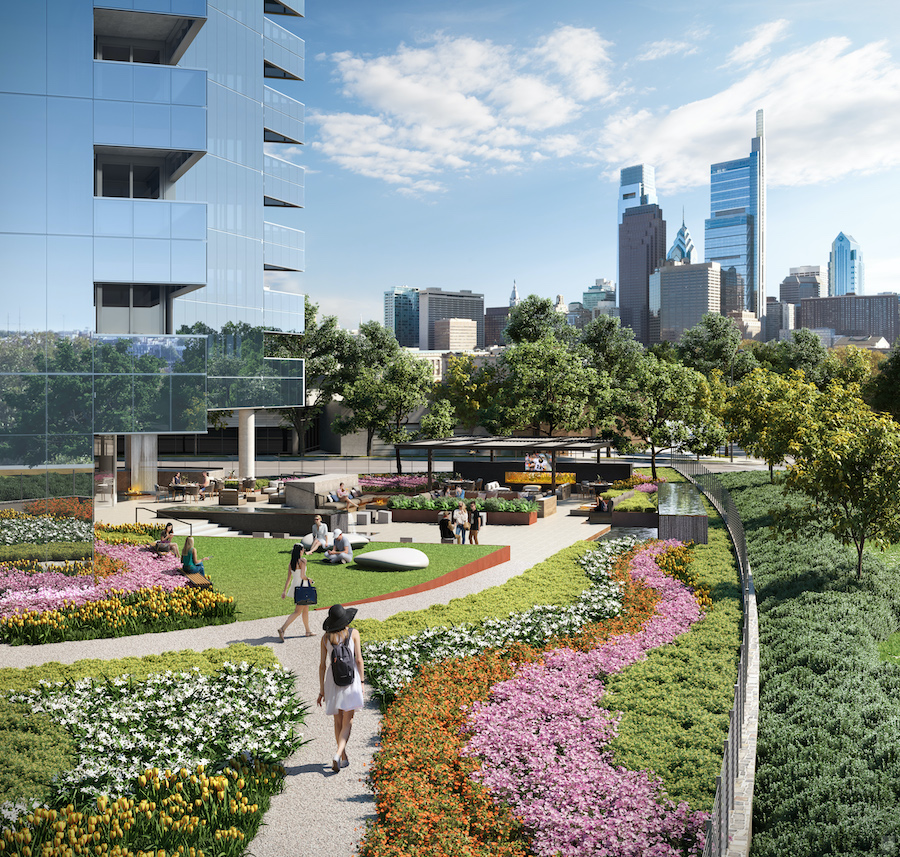 The amenity deck features a half-acre landscaped garden on its northwest side. The planted berm at right leads down into the City Branch trench; Bock says the site includes a provision for elevator access to the trench when warranted

According to Tom Bock, president of Bock Development and its sister company, construction management firm Ernest Bock & Sons, they got asked whether the tower would cause damage to the museum. “When you look at it, it’s basically a mirror that reflects the Rodin,” he says. “So the question was brought up: What kind of damage would you have with that?

“So we had an expert report done, and we shared it with the Philadelphia Museum of Art. And [the report] said there would be absolutely zero damage done to the sculptures or any of the artwork. That’s because our glass is not really reflective, but rather,  it absorbs the sun” — that is to say, it captures the solar energy that would otherwise be reflected back onto the adjacent museum as heat. Yet at the same time, the double-paned glass doesn’t cook the residents either thanks to its insulating qualities.

The pergola and fire pits

“Actually, there’s more damage coming from the sun rising in the east,” says Bock. “And the building creates shade that actually protects the Rodin” in the morning hours.

That would be a function of the building’s siting along a diagonal street parallel to the Ben Franklin Parkway; the southeast end of the building would block direct morning sunlight from spring through fall.

“The Art Museum put us through the wringer” in vetting the light study, Bock adds. “And they were pleasantly surprised when they found out” that 2100 Hamilton would not harm the Rodin or its contents. 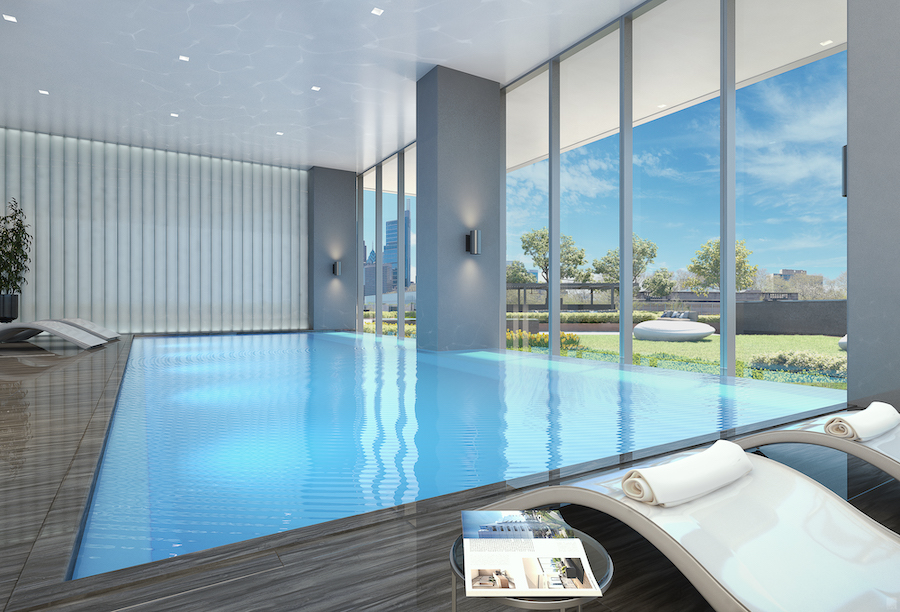 As for the insertion of a park and trail under the amenities deck, the cantilevering of the deck leaves the park’s eventual construction possible. The deck is there, Bock says, for three reasons.

First, the City Branch trench at this point is still a barren patch of gravel and asphalt at the mouth of the Pennsylvania Avenue tunnel, and “my buyers don’t want to look down into a hole.” Second, he saw the deck as an opportunity to beautify the corner of 21st and Hamilton streets, and he says that the project’s Logan Square neighbors were on board with the idea after he presented the project to them.

(The building could be built by right, but because it lies within the Parkway zoning overlay, the Municipal Art Commission had review power over it and could require changes to the design.)

A balcony in an east-facing unit; every unit’s living room includes a gas fireplace, seen at left here

Finally, there was the fiscal condition of the Friends of the Rail Park, the group seeking to extend the existing park on the City Branch spur east of Broad Street westward into the trench and tunnel. When he met with the group, he learned that it had spent what it had outfitting the initial section and that they weren’t likely to have the money to extend the park anytime soon.

What Bock did then was build the amenity deck out over the trench but leave a 20-foot-wide opening on its south. The builder added landscaping to the south side of the trench and left space under the deck that could be used for the park when conditions allow the project to proceed. Landscape architecture firm Sikora Wells Appel handled the details on this space and the adjacent berm leading into the City Branch trench below. 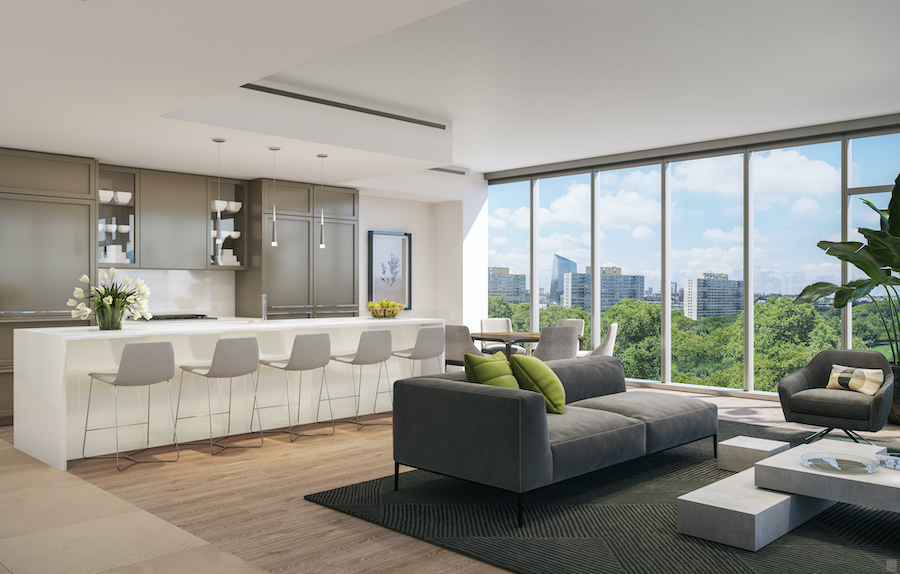 An example of a kitchen in one of the units

Meanwhile, while the amenity deck may not be a public space, it is designed so that the public can look in and see some of its features. Those include a reflecting pool, four fire pits, a waterfall with a fire feature beneath it, a pergola-covered sitting area with a bar and grills, and a half-acre garden.

The buidling’s swimming pool, however, is inside, which  Bock says makes it more useful for the residents: “How many times are you going to come outside to use a pool in Philadelphia?” he asks. 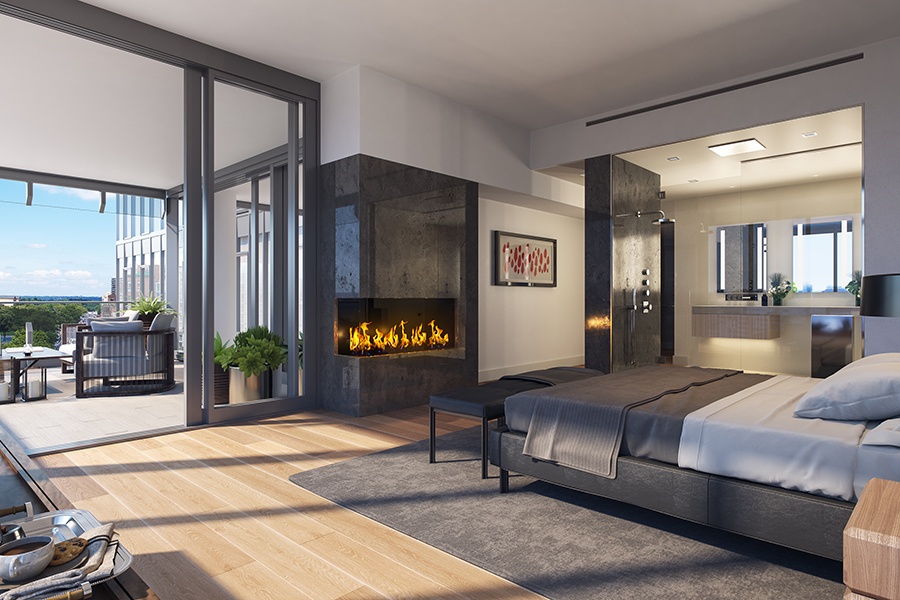 Primary bedroom in one of the units showing gas fireplace

Other resident amenities include a guest suite, a fitness center and a large open-plan space that combines a lounge, an event space and a conference room.

Work on this building began around the time the COVID-19 coronavirus landed on these shores. Fortunately, many of its design elements are well suited for a socially distanced new reality. Each of the building’s 29 units will have private elevator access, and the elevators are equipped with biometric facial recognition technology that permits touches access to each individual unit. 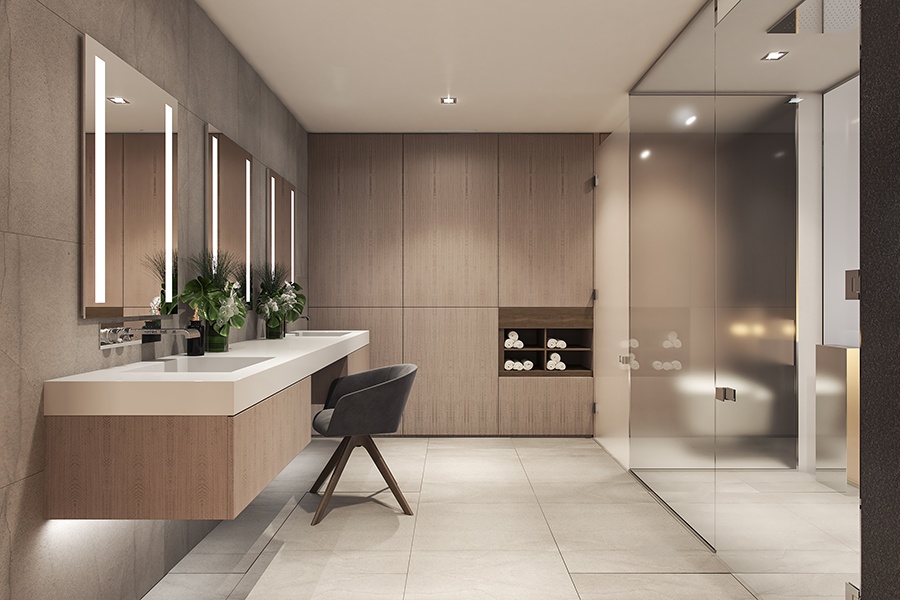 Primary bathroom in one of the units

And every unit will have a private balcony with sliding doors that retract to make the indoor and outdoor spaces one. Some units’ balconies will face southeast, towards the Center City skyline; others will offer southwest views that take in the Art Museum, Fairmount Park and University City. The full-floor 10th-floor penthouse will have balconies facing in both directions. The units will also have at least two gas fireplaces, one in the living room and one in the primary bedroom. 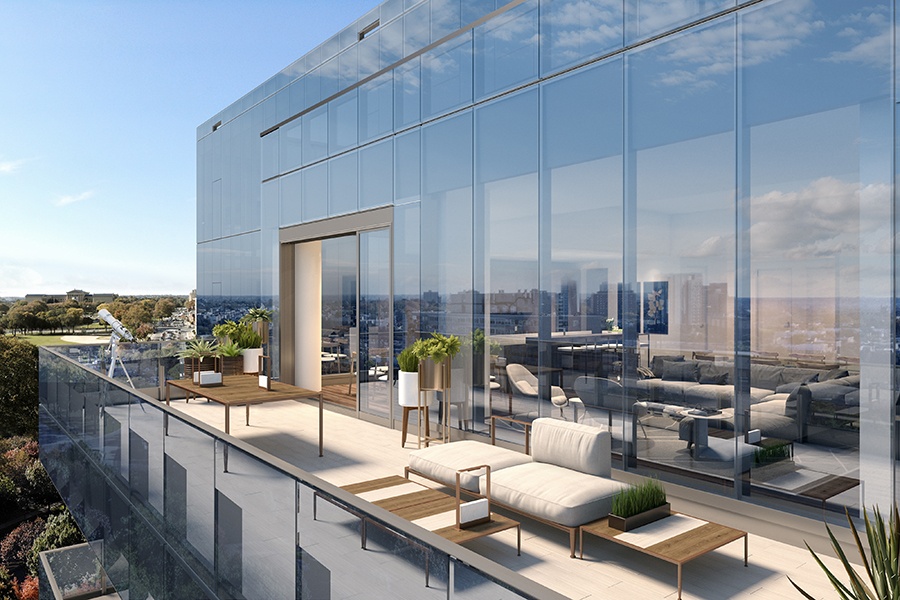 Part of the wraparound west balcony on the penthouse

“The defining elements of 2100 Hamilton, including privacy, unprecedented outdoor space, and advanced technologies, allow it to be perfectly positioned for this time, and we’re already seeing strong demand,” Bock said in a news release announcing the opening of the building’s sales center. Thanks to COVID-19, all of the building’s milestones, from groundbreaking to sales center opening to topping-off, have taken place virtually, and that trend is sure to continue until the building welcomes its first residents one year from now.

2100 Hamilton by the Numbers

Number of parking spaces: Not available; the building has a 24-hour valet parking garage