The stories of five families and their fantastic new homes. 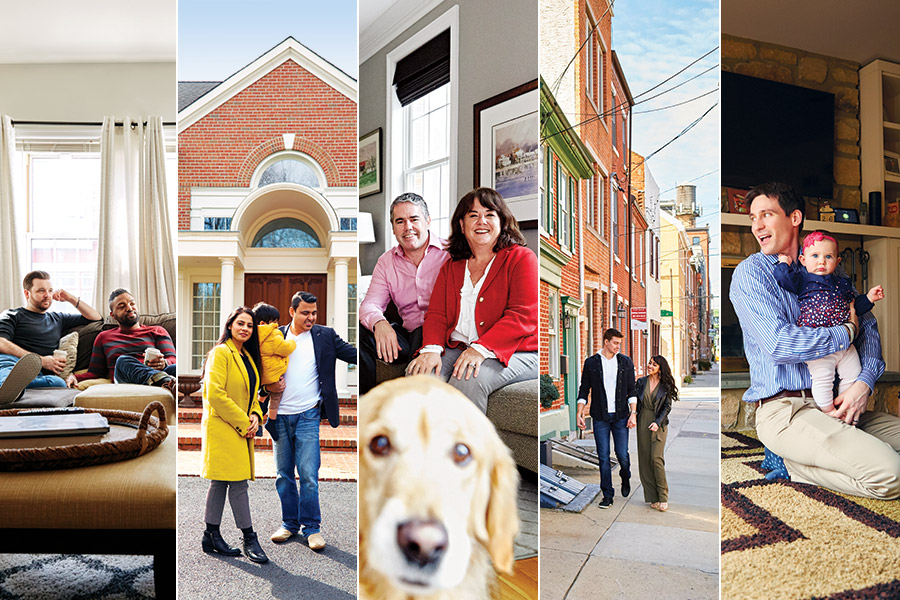 It’s easy to get caught up in the numbers when talking about real estate. That’s why we sought out real people, and real stories. These five Philly couples opened up about how they scored that most elusive of finds: the dream house. 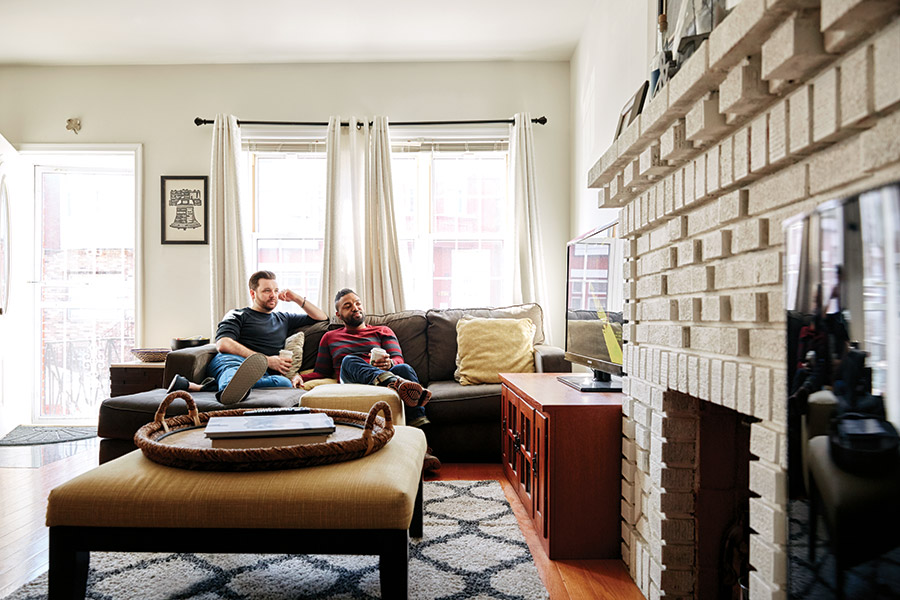 In 2015, Jared Epler and Terry Upshur were newly engaged, focused on planning their wedding, and in no rush to buy a home. Then their landlord decided to sell the building they’d been renting in, in the Italian Market. “We realized that it made more financial sense for us to put the money we would have spent on a new lease toward a down payment,” Terry says.

Friends had purchased in Point Breeze, and the couple loved the sense of community and new development in the area. “The prices were great, and it was more affordable than Fishtown or Graduate Hospital,” Terry says. When they saw a fully renovated three-bedroom rowhome, they knew it was time to take the leap.

Now, they love entertaining in such an open, airy home. They love their neighbors, too. “They’ve all been welcoming and accepting,” Terry says. “We’re all respectful of one another and have a strong sense of community because we’re all homeowners.”

After moving in, Terry actually decided to make a career change: He’s now a realtor for Keller Williams. And after owning for a few years, Terry and Jared (a high-school guidance counselor) have purchased a second property — a rowhome in Kensington, which they plan to rent out. 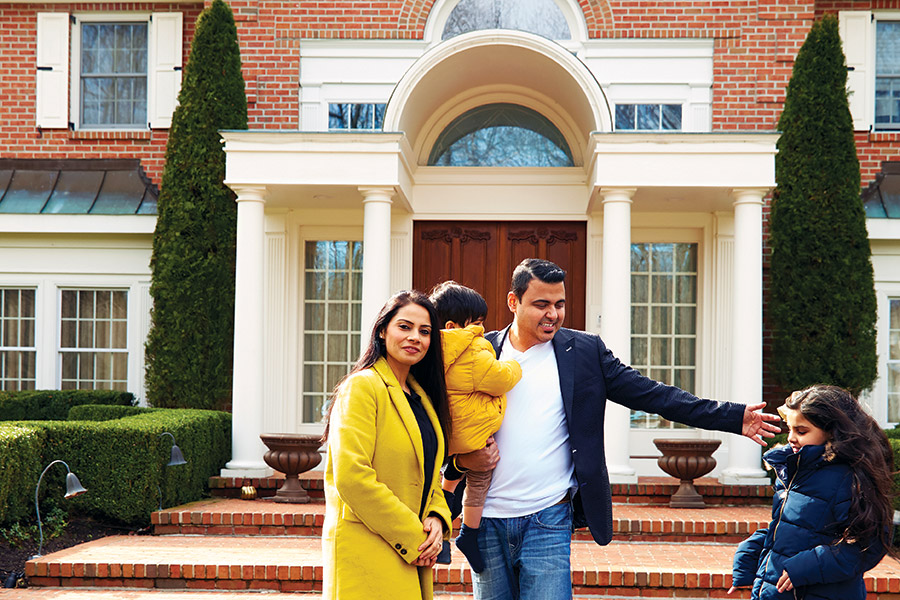 Nearly 250 homes didn’t make the cut as Geetika and Ricky Singh looked to move from their 6,000-square-foot home in Haverford closer to Ricky’s office in Mount Laurel. The holy grail they were seeking: water. “We had spent five years living on the oceanfront in Ocean City, Maryland,” businessman Ricky says. “I love the water — but obviously, you can’t get ocean in the middle of New Jersey.”

So when a palatial estate — complete with a 1.5-acre private pond large enough for paddle-boating and fishing — hit the market, Ricky and Geetika (who’s getting her master’s at the University of Delaware) knew they’d found their home. Working with their broker, Melissa Young of the Young Group at Berkshire Hathaway HomeServices Fox & Roach, the Singhs negotiated from the $2,300,000 list price down to $2,050,000 — then invested nearly half a million dollars in renovations, most notably installing a grand front-yard fountain.

The protracted search was worth it. “Our kids are now in one of the best school districts,” says Ricky. “We have access to a corridor of Indian [amenities] we love, and best of all, we’re within 15 minutes of lots of cousins and family and now have this wonderful space to entertain them.” 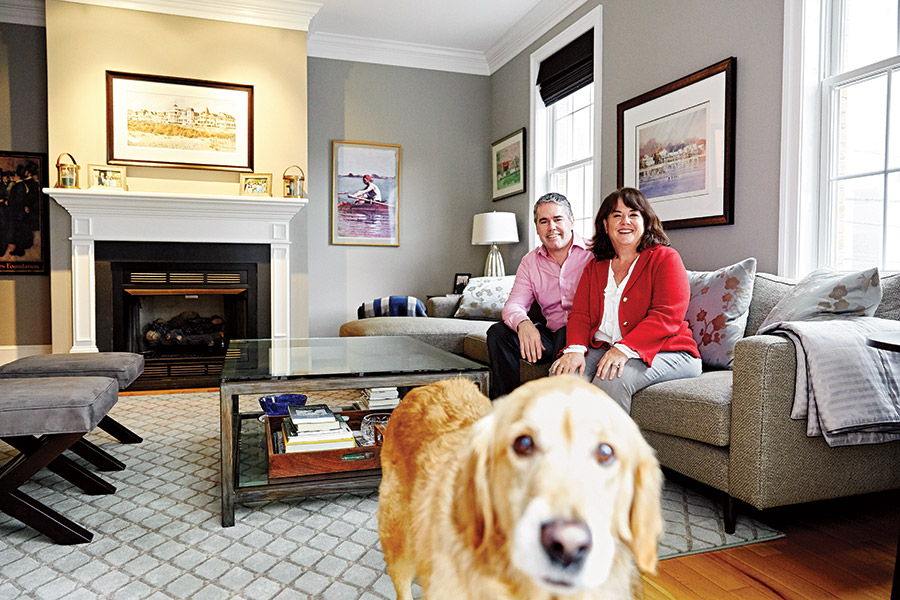 After spending 15 years in Wayne raising their two daughters, Philly natives Christopher Morris, who works in financial services marketing, and Suzanne McMonigle, a pharmaceutical exec, started to feel the pull of Center City more and more strongly. “We had a subscription to the Philadelphia Theatre Company; we had season tickets to the Philly Pops and partial season tickets to the Phillies,” says Chris, who coaches high-school rowing part-time on Boathouse Row for Conestoga High. “We were constantly in the city and spending a lot on upkeep for a home, yard and pool we barely used.”

They started looking in Fitler Square, but inventory was low. Working with Reid Rosenthal of the Rosenthal Group at Berkshire Hathaway HomeServices Fox & Roach, they looked at Naval Square next. “We liked it, but it felt more suburban than like the city,” Chris says. Then Reid found them a gem: a three-bedroom single-family home in Grad Hospital — with a two-car garage. At 3,000 square feet, it’s bigger than what they envisioned buying, but a guest bedroom (and all that parking!) lets them entertain often. “We both work outside of the city, so now we really love weekends: We park the cars on Friday and don’t move them all weekend,” Chris says. “Friends will come down and we’ll go to dinner or the theater or a game.” Bonus: For the Eagles parade, he left his car at work so friends could park in his garage. Brotherly love at its best. 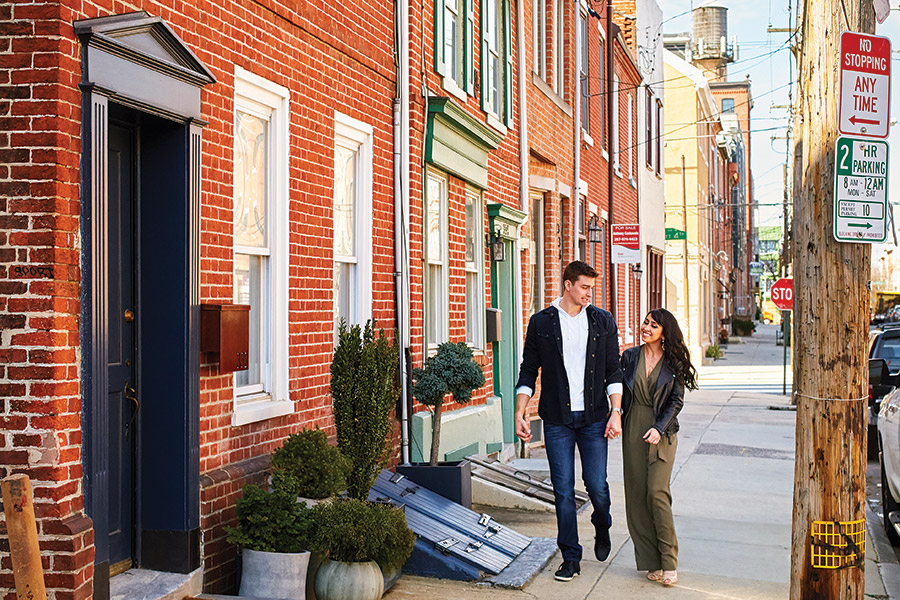 Last year was one of much love — and much adulting — for Kyle Shollock and Ashley Leoncini. The Philly cop and Northern Liberties salon owner, respectively, got married in May and moved into their first home on Halloween. “We saw the house online and were immediately obsessed with it,” Ashley says. Who could blame them? Built in 1782 and once part of the Underground Railroad, the two-bedroom home had been completely updated and had a two-car garage. “That was the icing on the cake — it was like finding gold,” Ashley says.

They had to move fast — the sellers wanted a quick close so they could take the money to travel the world — so with advice from their realtor, Genevieve Livesey of Berkshire Hathaway HomeServices Fox & Roach, the couple offered the full asking price and included a personal note about their connection to the neighborhood and their commitment to taking care of the home. “I still wake up and love it every day,” Ashley says. “But now we gotta calm down on the big milestones for a little bit!” 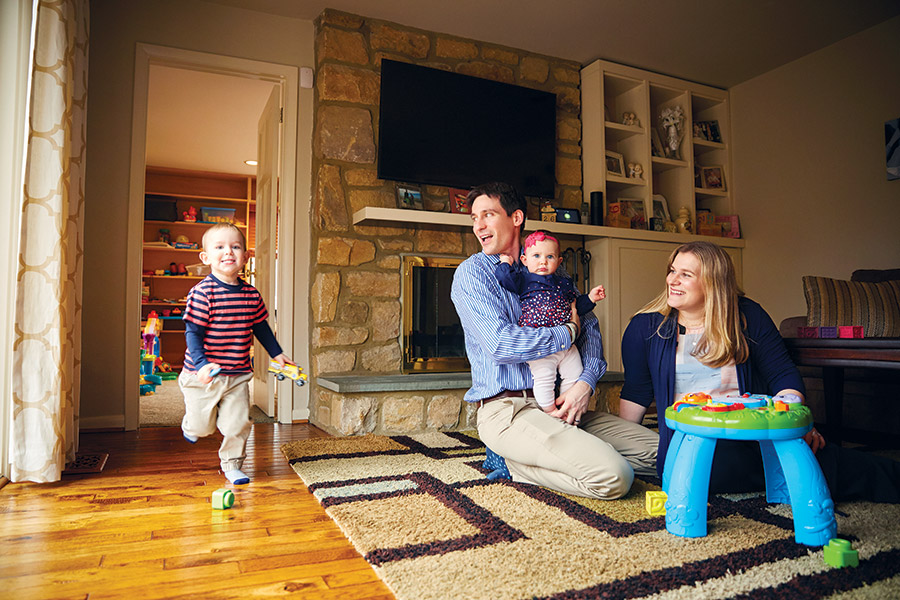 It was while visiting his suburban Pittsburgh in-laws that Matt Izbicki had his aha moment. “Our son was one, and he just went nuts! Their living room and kitchen felt so big to him,” says the senior director of engineering at Comcast. “We were living in a rowhome in Fitler Square that was all up-and-down, so there wasn’t room for him to run around.” Still, Matt’s wife, Dominique — also at Comcast, as a senior director of artificial intelligence product — wasn’t ready to give up city living. “I was really worried about feeling isolated,” she says. Then she got pregnant with their daughter, and space started to feel exceptionally tight.

The couple concentrated their search in Wynnewood, where they’d have five-minute access to four train stations. They didn’t bid quickly enough on the first house they liked. But on Zillow one night, Matt spotted a four-bedroom home on a corner lot on a cul-de-sac and had a gut instinct: “We’re going to buy that house,” he told Dominique.

But Matt was right — and now, Dominique couldn’t be happier. “It doesn’t feel isolated at all. People are always out on our street, and we have all the conveniences we loved in the city — FreshDirect and Grubhub and Caviar,” she says. “I’d make the choice all over again.”

What’s hot? What’s not? And where can you get a great deal? Here’s everything you need to know about Philly real estate right now. Read more »

11 Tips for Going to Market, Whether You’re Buying or Selling

What’s Happening in Your Neighborhood?

Published in the April 2018 issue of Philadelphia magazine.