Pennsylvania is one of the only states where you can self-unite. 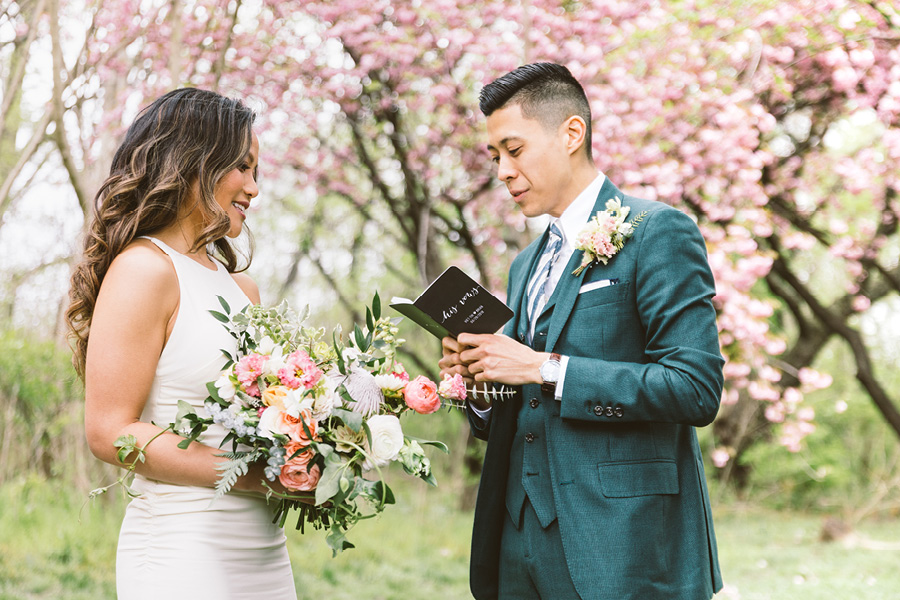 For many couples throughout the Commonwealth of Pennsylvania, being able to marry themselves has been a saving grace over the past year. Duos scrambled to find a way to still say “I do” amid the COVID-19 outbreak, eloping in living rooms or backyards or even with emergency guidance from Philadelphia City Hall. But it’s safe to say that Quaker weddings — also known as self-uniting ceremonies — will remain a popular option for soon-to-be-weds long after the pandemic eases, thanks to the flexibility, options and accessibility they present for those who don’t want to go the standard church-wedding route. Case in point: No officiant is actually required to be present at the ceremony; two witnesses and their signatures are all you need. And you can get hitched wherever it suits your personality and style (assuming venue, city, county and state ordinances allow). Here in Philly, that could mean iconic local dive bars like Dirty Franks or parks and gardens. Then there are all the beautiful, rustic locations in surrounding counties. Want to learn more? We’ve got the “I do” scoop.

What exactly is a Quaker wedding?

Quaker weddings are a special type of ritual for which no officiant is needed to marry two parties, and Pennsylvania is among only a handful of states in which you can say “I do” via a self-uniting ceremony.

The tradition has its roots in the Quaker faith, where weddings tend to happen with little fanfare. But uniting without an officiant is gaining popularity among people outside of the Quaker practice. For example, the Marriage License Bureau at Philadelphia’s City Hall issued 1,500 self-uniting licenses in 2019. That number ticked up to 1,762 in 2020 — a rise that could be attributed to the limitations put on large weddings due to the pandemic but could also be due to the choices a Quaker wedding offers for those who aren’t tied to a religious doctrine. (A recent study by the Pew Research Center suggests a modest national rise in “nones,” or those who are unaffiliated, and a decline in Christianity.)

Self-uniting marriage licenses have been legally valid since 1861 in Pennsylvania, according to the ACLU. There has been some dispute over whether you needed to prove you were part of the Quaker or Bahá’í faiths — in 2007, for example, the ACLU filed a civil rights lawsuit on behalf of a couple in Allegheny County who were denied a self-uniting marriage license because of their religion. After that case, many counties in Pennsylvania began providing self-uniting licenses regardless of a couple’s religion. (Washington, D.C., Colorado, Wisconsin, Illinois and California have similar policies.) The result: a number of new, and sometimes unconventional, Quaker-style weddings popping up all around the area.

What are the legal requirements for having a Quaker wedding?

To hold a Quaker wedding in Pennsylvania, you’ll have to follow a few steps. In Philly, you’ll need to first make an appointment for a marriage license through the Marriage License Bureau at the Register of Wills. Due to the pandemic, marriage licenses are being offered by appointment only. A self-uniting marriage license costs $100. (A regular license costs $90.) Then, you’ll need a self-uniting certificate declaring your intention to be married. The Philadelphia Yearly Meeting of the Religious Society of Friends offers the traditional language, but couples may customize the certificate. A tip: Etsy is full of vendors peddling Quaker wedding certificates, and local vendors like Casa Papel (the team recently added gold ink calligraphy to a client’s document) and Chick Invitations can create a custom design. (Inquire on their websites.)

You also need your partner (natch) and two witnesses to sign the document during a ceremony of your choosing — and you’re married. (Once signed, the duplicate portion must be returned to the Marriage Record Department in room 415. There, you’ll receive your certified copy, which is what you need for all legal documents.) Keep in mind that Pennsylvania marriage licenses can be used anywhere in the Commonwealth — so if you get your license in Philly but want to say “I do” in Bucks County, that’s fine.

Because you can make Quaker weddings as simple and unfussy or over-the-top as you wish, couples in the Philly area have added their own unique flair to their soirees.

Let’s start with the uncomplicated route. Viet-Thi Ta and Brian Chan, who met in San Francisco but lived in Philly for a time, self-united with a small group of friends in Fairmount Park, then held a larger celebration with their extended family in California nine months later. It was important for them to marry here not only for practical matters (taxes), but also because of their attachment to the city. “We were like, that’s super-cool — something special to have that’s Philadelphian,” says Brian. About 12 people were on hand for the nuptials. 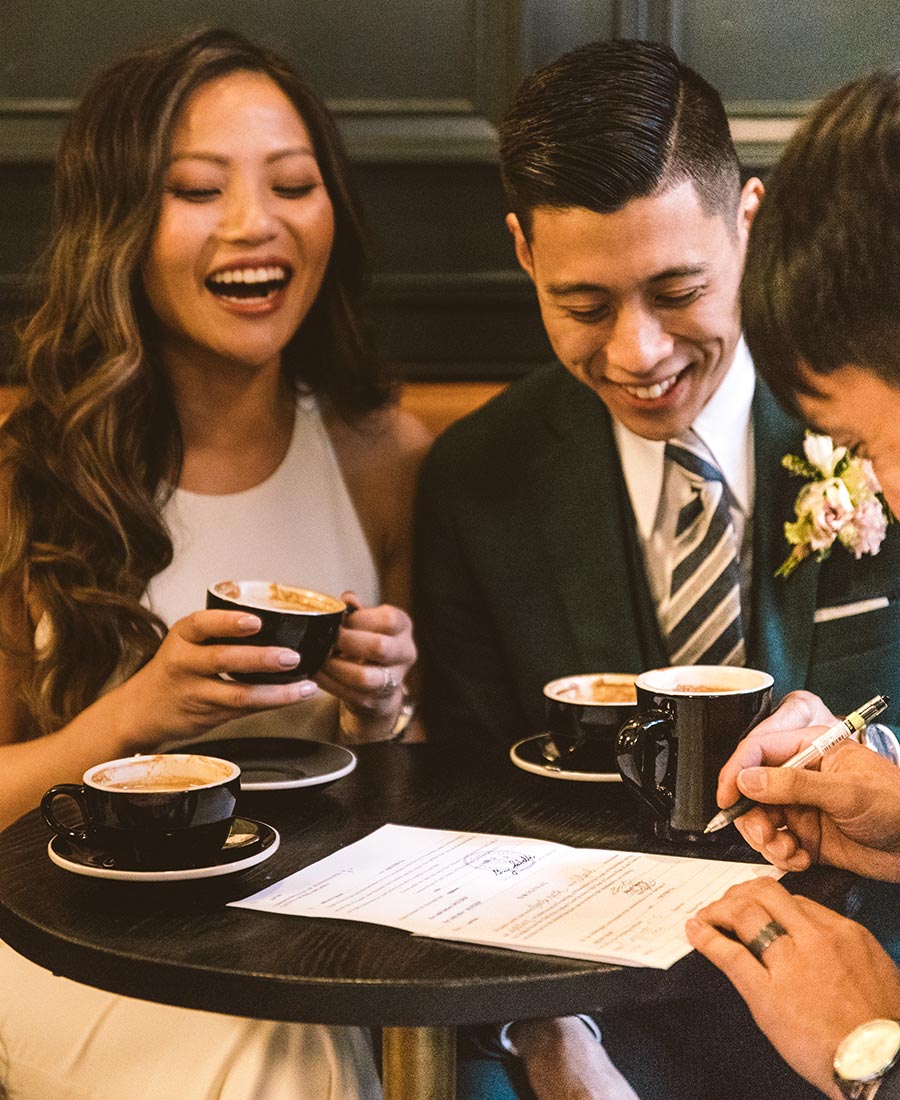 Viet-Thi and Brian, along with their witnesses, signed the certificate at Rival Bros. Photo by Mark David

After pronouncing themselves husband and wife, Brian and Viet-Thi strolled and snacked through the city, beginning with Rival Bros., where they and their witnesses signed the document. It was a low-key and refreshing way to celebrate for the couple, whose bigger wedding totaled 170 guests, in keeping with Vietnamese tradition. “For Philadelphia, I liked that it was more about me and her,” adds Brian.

When the pandemic hit in early 2020, self-uniting licenses proved beneficial in unforeseen ways. Take Victoria Espinoza and Abe Blackburn, who married on March 21st. The couple was already planning a Quaker ceremony in their Center City apartment with their Philly friends (with a larger shindig with their families, who live abroad, in the future) when the quarantine went into effect. 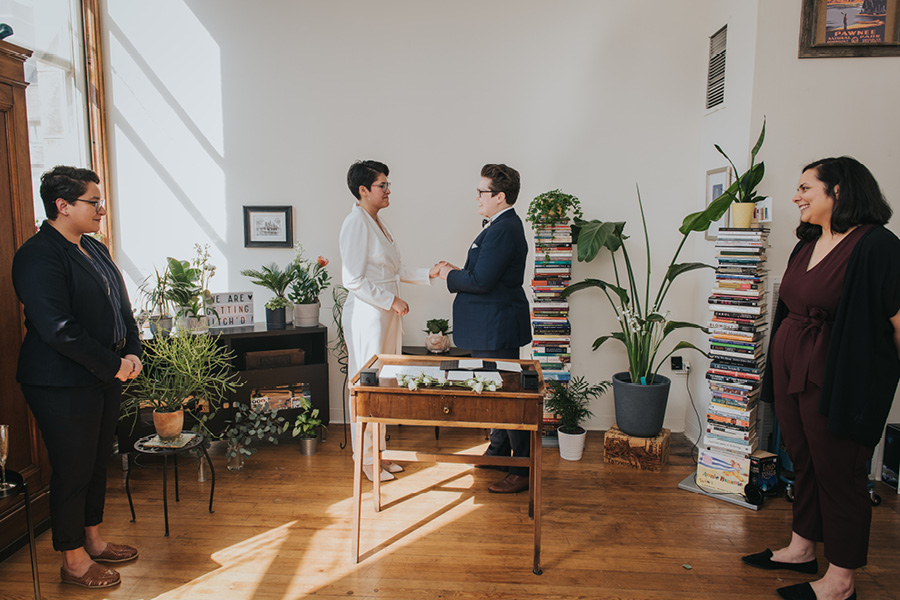 Amid the pandemic, Victoria Espinoza and Abe Blackburn self-united in their Center City apartment. Photo by Ray Ermel

While they ultimately limited the day to two friends and a photographer, they embraced it. “We took it as an opportunity to divorce ourselves from marriage traditions and do it in a way that was special to us,” says Abe. The early-afternoon ceremony was timed to catch the light streaming through the windows. They signed the license on a beloved console. And they live-streamed it all to 30-plus guests, who also spoke.

Grad Hospital couple Jasmine Zheng and Benjamin Siegel-Wallace took it up a (literal) notch with their rooftop elopement. Jasmine, a physician at Penn Medicine, obtained her emergency self-uniting license (offered temporarily by City Hall due to COVID-19) so the couple could still say “I do” on May 16th, a special day for the family. They had to work quickly and plan on the fly (with a few snafus), but the flexibility of the tradition allowed them to pull it off with a few special touches — including a beautiful chuppah filled with Jasmine’s favorite flowers, peonies. The couple was joined by Ben’s mother and youngest brother, two dogs and their photographer. 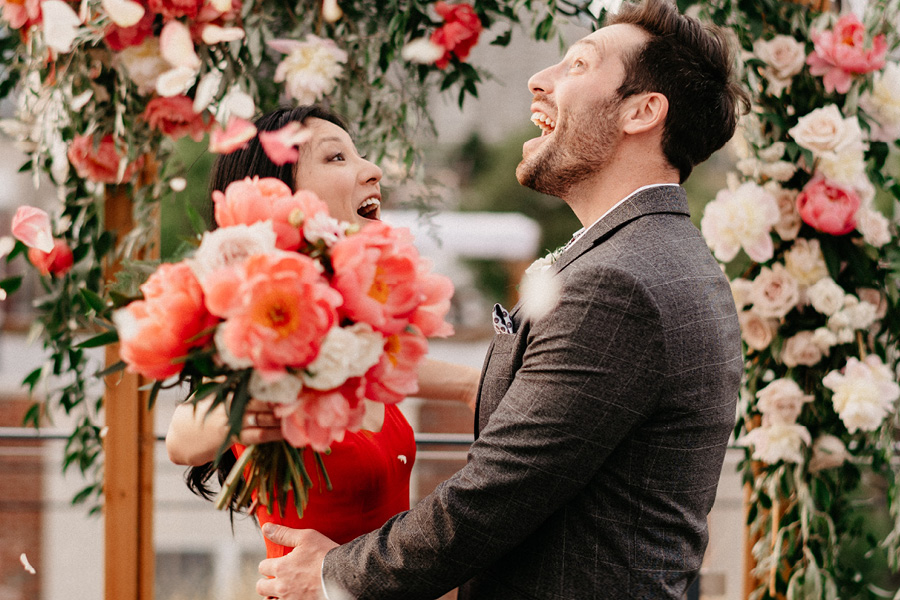 Jasmine Zheng and Benjamin Siegel-Wallace eloped with an emergency self-uniting license on their rooftop. Photo by Pat Robinson

Then there’s all the glitz and glam of the past (and future): Christina Matthias and Charles “Hank” Garrett held a gorgeous, hippie-inspired Quaker wedding in June 2017. Their high-production fete, which took place on the bride’s family’s farm, was a unique hybrid of a bohemian rustic aesthetic with Quaker tradition. The vibrant and colorful outdoor nuptials — complete with glamping tents for guests — also included a Quaker-style signing of the marriage certificate. The certificate, signed by all of the guests, now hangs in Christina and Hank’s South Philly home. 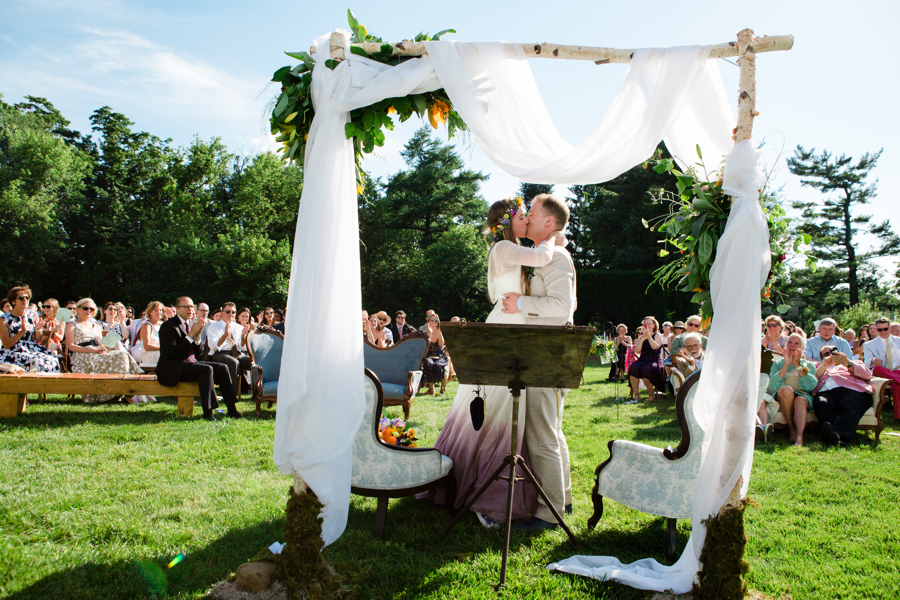 Christina Matthias and Hank Garrett went all out for their hippie-inspired Quaker ceremony. Photo by Asya Photography

Christina describes how the decision to have a Quaker wedding was influenced by her own family’s tradition: “My parents married themselves with a self-uniting license. When Hank and I were planning our wedding, that was the easiest choice for us. We loved the idea that we could marry ourselves and be empowered legally to make our own marriage official, with all of our friends and family as witnesses.”

What are some Quaker wedding ceremony tips?

1. Be confident in your decision to self-unite and make important decisions together. This is often the first time you’ll create a tangible experience that will demonstrate how you’ll make important life decisions in the years ahead, notes life-cycle celebrant Alisa Tongg. “If you’re stepping away from your family’s tradition to wed in your own way — for your peace of mind and every holiday discussion for the rest of your lives — make sure you take every precaution. It is impossible for people to be looking at you in judgment when they have tears in their eyes from a genuine ceremony.”

2. Carefully plan out the ceremony program, and think about how your guests will play a role. Christina and Hank, for example, had attendees share stories, read poems and give advice during their ceremony — some planned and some unplanned. Create a program for the wedding that will make it feel intimate for you and your partner, and inform guests of that plan. Be clear in advance about whether you’ll open the floor for guests to speak. Make sure that some remarks are planned, but also leave time for unscheduled remarks.

3. Consider having a friend or family member officiate. You need two witnesses — one of whom can be your officiant — so why not have someone near and dear to your heart preside over the ceremony? If you’re having a larger self-uniting celebration (with more than, say, four guests), it could take some pressure off you to have another individual leading the ceremony. This individual doesn’t need to get ordained online and can quickly pick up some tricks of the trade. (Learn more about friend officiants here.)

4. If you’re rooting the ceremony in a family or historical tradition, do some research first. Figure out what might be meaningful to you and your partner. Consider if you want your wedding to focus on the spiritual and religious aspect of having a self-unifying marriage. Think about whether your family has a Quaker background and rituals that have been passed down, or even what kind of documents you want to include in the ceremony. And think about unity rituals you’d like to incorporate — handfasting or lighting a candle, for example.

5. Make sure the ceremony location exudes the energy of the kind of Big Day you want to have. Farms and small rural venues can lend the event a quiet and peaceful aura. Family properties or landmarks can act as a nod to generational tradition, and spontaneous locations can make a Quaker-style wedding extra-fun and memorable. For example, Jasmine and Ben’s rooftop locale had special significance despite being a Plan B. “We got married on the same rooftop where we had one of our first romantic dates while sharing Chick’s pizza, and the same rooftop where Ben had proposed,” says Jasmine.